This article forms part of an IPS series on the Paris Agreement on climate change ahead of its signing in a high-level ceremony at U.N. headquarters in New York on Apr. 22. 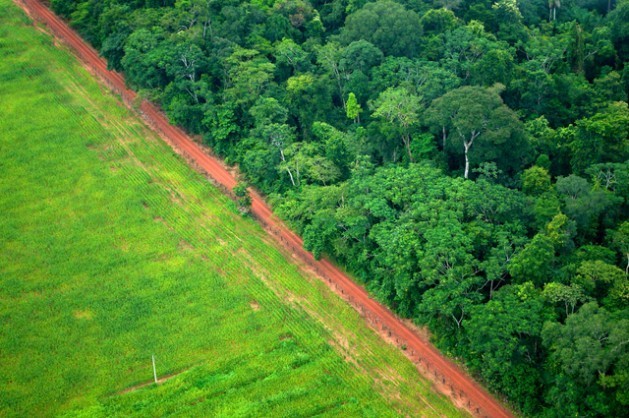 Deforestation, as seen in this part of Rio Branco, the northern Brazilian state of Acre, is one of the main sources of greenhouse gas emissions in Latin America. Credit: Kate Evans/Center for International Forestry Research

SAN JOSE, Apr 20 2016 (IPS) - The countries of Latin America will flock to sign the Paris Agreement, in what will be a simple act of protocol with huge political implications: it is the spark that will ignite actions to curb global warming.

More than 160 countries have confirmed their attendance at the ceremony scheduled for Friday, Apr. 22 in New York by United Nations Secretary-General Ban Ki-moon. And eight have announced that they will present the ratification of the agreement during the event, having already completed the internal procedures to approve it.

The countries of Latin America, with the exception of Nicaragua and Ecuador, promised to participate in the collective signing of the historic binding agreement reached by 195 countries on Dec. 12 in the French capital.

Experts consulted by IPS stressed the political symbolism of the ceremony, and said they hoped Latin America would press for rapid implementation of the climate deal.

“In New York, the region will underscore the importance of acting with the greatest possible speed, in view of the impacts that we are feeling in each one of our countries.” -- Andrés Pirazzoli

“In New York, the region will underscore the importance of acting with the greatest possible speed, in view of the impacts that we are feeling in each one of our countries,” said Chilean lawyer Andrés Pirazzoli, a former climate change delegate of Chile and an expert in international negotiations.

The countries of Latin America and the Caribbean, many of which are especially vulnerable to the effects of climate change, are calling for the adoption of global measures to curb global warming.

According to a 2014 World Bank report, “In Latin America and the Caribbean temperature and precipitation changes, heat extremes, and the melting of glaciers will have adverse effects on agricultural productivity, hydrological regimes, and biodiversity.”

Pirazzoli said this recognition of the threat posed by climate change in the region would be a bone of contention for the participating countries.

At the Paris Summit or COP 21 – the 21st session of the Conference of the Parties to the United Nations Framework Convention on Climate Change (UNFCCC) – the Chilean expert led the technical team of the Independent Association of Latin America and the Caribbean (AILAC), made up of Chile, Colombia, Costa Rica, Guatemala, Honduras, Panama, Paraguay and Peru.

Pirazzoli said that “if there is one issue that has brought Latin America together, beyond internal ideological questions, it was the issue of vulnerability.”

“That will be a mantra for the region in the negotiations that will follow the signing of the agreement,” which will get underway again in Bonn in May, he added.

Friday’s ceremony is just the first piece in a puzzle that involves the 197 parties to the UNFCCC, in which each one will have to activate its mechanism to achieve ratification of the international agreement. 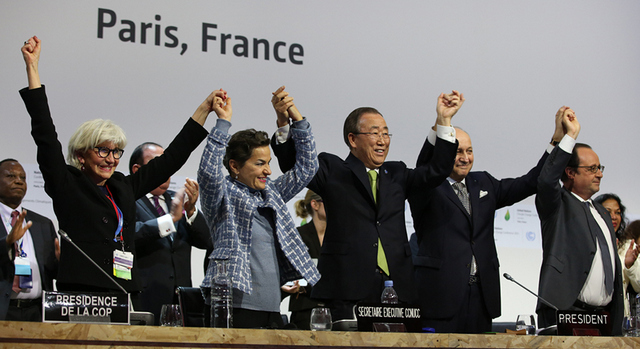 On Dec. 12, 2015, at the end of COP 21, United Nations Secretary-General Ban Ki-moon (centre) and other dignitaries celebrated the historic Paris Agreement on climate change, to be signed this week in New York. Credit: United Nations

In order for the treaty to enter into effect, it must be signed by at least 55 parties accounting for a combined total of at least 55 percent of global greenhouse gas emissions, and this is to happen by 2020, according to what was agreed on at COP 21.

The countries agreed to limit global warming to 2 degrees Celsius by the end of this century relative to pre-industrial levels to prevent “catastrophic and irreversible impacts”.

The agreement set guidelines for the reduction of greenhouse gas emissions, for addressing the negative impacts of global warming, and for financing, to be led by the countries of the industrialised North.

In the region, the process will vary from country to country, but “according to tradition in Latin America, normally these accords have to go through two houses of Congress, which makes the process more complex,” said Pirazzoli.

He pointed out that Mexico and Panama committed to ratifying the agreement this year.

The United Nations reported that the eight countries that will attend the agreement signing ceremony with their ratification instrument in hand are Barbados, Belize and St. Lucia – in this region – along with Fiji, the Maldives, Nauru, Samoa and Tuvalu.

“A story of power of vulnerable countries is beginning to emerge, and instead of coming as victims, they will use this ceremony to show that they want to be in the leadership,” said Costa Rican economist Mónica Araya, another former national climate change negotiator.

Araya heads the non-governmental organisation Nivela and is an adviser to the Climate Vulnerable Forum, a self-defined “leadership group” within the UNFCCC negotiations, which assumes strong, progressive positions.

The economist said the confirmation of their participation in the New York ceremony by almost all of the countries in Latin America was one more sign that the region is waking up.

She concurred with Pirazzoli that Latin America’s leaders are finding points in common that enable them to overcome ideological barriers, at least in this field.

“We have seen new efforts, such as the summit of environment ministers in Cartagena, which set a precedent by creating a climate change action platform for the entire region,” said Araya, referring to the 20th Meeting of the Forum of Ministers of the Environment of Latin America and the Caribbean, held in late March in that Colombian city.

But she said that in order for international efforts to be effective, change must start at home. “Public opinion and the business community should be helped to understand that our parliaments will play a key role” in ratifying the agreement, she added.

Enrique Maurtua, climate change director with the Argentine NGO Environment and Natural Resources Foundation, and a veteran of the climate talks, agreed.

“The signing of the accord is only the second step, after reaching the agreement,” he said. “Without this, we can’t go on to the third, which is ratification – the most important step in order for the accord to go into effect.”

Maurtua said these global processes need to take root at a global level, by improving their Intended Nationally Determined Contributions (INDCs), which nearly the entire region submitted last year, with the exception of Panama, which did so on Apr. 14, and Nicaragua, which said it would not do so.

Although they account for only a small proportion of global greenhouse gas emissions, the region’s countries pledged to reduce them in their INDCs – a numerous group with ambitious goals, including the two biggest economies in the region: Brazil and Mexico.

Maurtua was upbeat with regard to the implementation of the Paris Agreement by 2020 and the 2016 negotiating process, which will begin in Bonn in May and will continue until COP 22 is held in Morocco.

“Latin America could very well be an example of the implementation of good practices for achieving sustainable development,” he said.

The absence of Ecuador and Nicaragua is in line with previous positions taken, where they have showed a reluctance to participate in multilateral processes.

After COP 21, Nicaragua said the Paris Agreement did not go far enough.