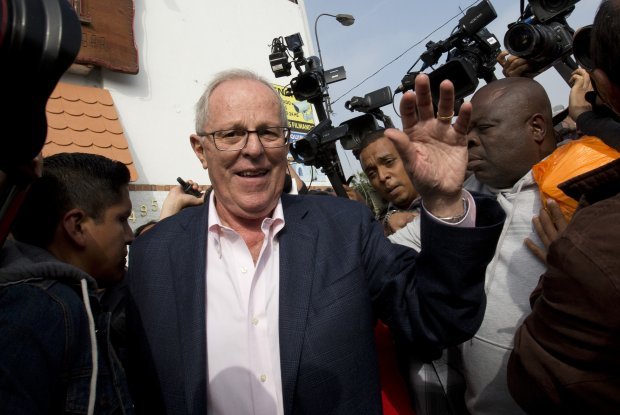 Peru's president-elect, Pedro Pablo Kuczynski, outside his home in Lima, while waiting for the vote count to be completed. Credit: Courtesy of La República

LIMA, Jun 9 2016 (IPS) - It is finally official: Pedro Pablo Kuczynski won Peru’s presidential elections by the thinnest of leads, and Keiko Fujimori once again just barely missed becoming president – although her party holds a solid majority in Congress, which means it will have a strong influence during the next administration.

With all of the votes counted, the national election office, ONPE, reported Thursday afternoon that the 77-year-old Kuczynski was ahead with 50.121 percent, against the 41-year-old Fujimori’s 49.879 percent.

The difference was 41,438 votes, which makes the triumph of the centre-right candidate of the Peruanos por el Kambio (PPK) party irreversible, even though some ballots were sent for review.

In the 2011 elections, Fujimori, the candidate for the right-wing Fuerza Popular, was defeated by a narrow margin, when nationalist President Ollanta Humala beat her in the runoff by 51.45 percent to 48.55 percent.

"The mandate that the people gave us is very clear. We joined the vote for Kuczynski in the second round to block a victory by Keiko Fujimori because she represented the threat of a return to corruption, to drug trafficking's influence on politics, to anti-democratic practices to gain power at any cost." -- Indira Huilca

The near-tie in the Sunday Jun. 5 runoff election has kept the country and the candidates’ campaign teams on edge, waiting for the ONPE to announce the result when 100 percent of the ballots had been counted, although analysts had clarified that it was impossible for the daughter of, and political heir to, imprisoned former president Alberto Fujimori (1990-2000) to overcome the slight difference.

Among the last ballots to be counted were the ones coming in from Peruvian voters in Germany, where Fujimori took aaround 18 percent of the vote and Kuczynski reached 51 percent, in the first round of the elections, on Apr. 10.

The last ballots from within Peru, meanwhile, came from remote villages in the Apurímac, Ene and Mantaro rivers valley (VRAEM), a broad area in central and southern Peru.

In the VRAEM districts – which are mainly communities from the Andean highlands regions of Ayacucho, Huancavelica, Apurímac and Junín, and to a lesser extent jungle areas in Cuzco – the left-wing candidate of the Broad Front, Verónica Mendoza, won more votes than Fujimori in April.

On Jun. 2, Mendoza, who came in third in the first round, urged her voters to cast their ballots for Kuczynski, to block the return of Fujimorismo to the country.

Fujimori’s father is serving a 25-year sentence for corruption and crimes against humanity.

These votes from rural Peru were Fujimori’s last hope, and all the way up to the release of the official ONPE bulletin, she maintained that they could turn the results around.

Political scientist and university professor Fernando Tuesta told IPS that actually, the results from the first round of voting had made it clear that the votes from abroad and from isolated communities would not significantly modify the general tendencies.

But while voters once again kept Fujimori from reaching the presidential palace, her party will be able to influence the direction taken by the country, from the single-chamber legislature, when the new government takes office on Jul. 28.

The Fujimorista bloc in Congress is known for blocking investigations of cases of corruption involving their representatives, and for pressuring their adversaries.

The big challenge facing the other two parties is keeping Fujimorismo from using its majority to control the government from Congress, and from pushing through measures in favour of its interests.

“The authoritarian temptation is part of the DNA of Fujimorismo,” Broad Front congressswoman-elect Indira Huilca told IPS. “We will never allow Fuerza Popular to use Congress to promote its impunity, to block the fight against corruption, or to cover up for and protect its supporters.”

“We haven’t come to Congress to be witnesses to the eventual destruction of democracy through authoritarian actions,” she said.

But, she warned, “it doesn’t mean that we will give carte blanche to Kuczynski.”

“The mandate that the people gave us is very clear,” said Huilca. “We joined the vote for Kuczynski in the second round to block a victory by Keiko Fujimori because she represented the threat of a return to corruption, to drug trafficking’s influence on politics, to anti-democratic practices to gain power at any cost.”

She is all too familiar with these practices: her father, Pedro Huilca, the long-time leader of Peru’s Confederación General de Trabajadores central trade union, was assassinated eight months after Alberto Fujimori’s self-coup in 1992.

The recent elections were characterised by a lack of transparency and irregularities.

The national election board, the JNE, implemented electoral reforms approved at the last minute by Congress, which gave rise to confusion and the questioning of authority, and undermined the legitimacy of the election board’s decisions.

Two important presidential candidates, Julio Guzmán and César Acuña, both of whom were doing well in the polls, were eliminated by the JNE amidst a climate of suspicion regarding the board’s independence.

What the elections made clear, analysts say, was that Peru needs better electoral laws.

“The anomalies seen in the elections were basically due to the modifications to the election law, and also to the positions taken by the JNE,” a former secretary general of the board, Juan Falconí, told IPS.

“There was a point where people did not know who the presidential candidates would be due to the confusing implementation of the new rules,” he said.

As a result, he said, there were “incidents that cast a shadow over the elections, and people no longer trust the electoral authorities.”

“The JNE has lost legitimacy in the view of voters because it has been clear that it failed to act in a decisive manner and that it lacked credibility and managed things poorly,” he said.

During the debate of the electoral reform proposed by the JNE, Fujimorismo opposed oversight of private campaign funding, and also rejected mandatory supervision by the electoral authorities of internal party elections to select their candidates.

Now that Fujimorismo will be a majority in Congress, a new reform to correct errors and make elections more transparent is unlikely.

“Without Fujimorismo, no electoral reform will be possible. And I don’t think it’s a priority for them,” said Professor Tuesta.

He said that while anti-Fujimorismo defeated the Fuerza Popular candidate, the president-elect will not be able to govern without negotiating with that bloc, which will influence the administration from the legislature.