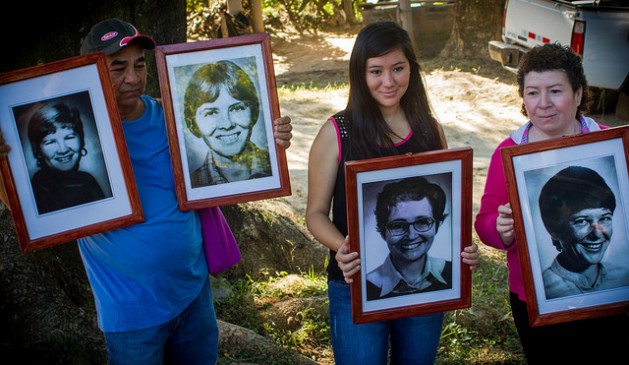 Residents of La Hacienda, in the central department of La Paz in El Salvador, are holding pictures of the four American nuns murdered in 1980 by members of the National Guard, as they attend the commemorations held to mark 35 years of the crime, in December 2015, at the site where it was perpetrated. Credit: Edgardo Ayala/IPS

SAN SALVADOR, Jul 23 2016 (IPS) - The ruling of the highest court to repeal the amnesty law places El Salvador in the dilemma of deciding whether the country should prosecute those who committed serious violations to human rights during the civil war.

It also evidences that, more than two decades after the end of the conflict in 1992, reconciliation is proving elusive in this Central American country with 6.3 million inhabitants.

At the heart of the matter is the pressing need to bring justice to the victims of war crimes while, on the other hand, it implies a huge as well as difficult task, since it will entail opening cases that are more than two decades old, involving evidence that has been tampered or lost, if at all available, and witnesses who have already died.

“We do not want them to be jailed for a long period of time, we want perpetrators to tell us why they killed them, given that they knew they were civilians...And we want them to apologize, we want someone to be held accountable for these deaths”-- Engracia Echeverría.

Those who oppose opening such cases highlight the precarious condition of the judiciary, which has important inadequacies and is cluttered with a plethora of unsentenced cases.

“I believe Salvadorans as a whole, the population and the political forces are not in favour of this (initiating prosecution), they have turned the page”, pointed out left-wing analyst Salvador Samayoa, one of the signatory parties of the Peace Agreements that put an end to 12 years of civil war.

Samayoa added that right now El Salvador has too many problems and should not waste its energy on problems pertaining to the past.

For human rights organizations, finding the truth, serving justice and providing redress prevail over the present circumstances and needs.

“Human rights violators can no longer hide behind the amnesty law, so they should be investigated once and for all”, said Miguel Montenegro, director of the El Salvador Commission of Human Rights, a non-governmental organization, told IPS.

The Supreme Court of Justice, in what is deemed to be a historical ruling, on 13 July ruled that the General Amnesty Act for the Consolidation of, passed in 1993, is unconstitutional, thus opening the door to prosecuting those accused of committing war crimes and crimes against humanity during the conflict.

In its ruling, the Court considered that Articles 2 and 144 of said amnesty law are unconstitutional on the grounds that they violate the rights of the victims of war crimes and crimes against humanity to resort to justice and seek redress.

It further ruled that said crimes are not subject to the statute of limitations and can be tried regardless of the date on which they were perpetrated.

“We have been waiting for this for many years; without this ruling no justice could have been done”, told IPS activist Engracia Echeverría, from the Madeleine Lagadec Center for the Promotion of Defence of Human Rights.

This organization is named after the French nun who was raped and murdered by government troops in April 1989, when they attacked a hospital belonging to the guerrilla group Farabundo Martí National Liberation Front (FMLN).

The activist stressed that, even though it is true that a lot of information relevant to the cases has been lost, some data can still be obtained by the investigators in the District Attorney’s General Office in charge of criminal prosecution, in case some people wish to instigate an investigation.

The law has been strongly criticized by human rights organizations within and outside the country, since its enactment in March 1993.

Its critics have claimed that it promoted impunity by protecting Army and guerrilla members who committed human rights crimes during the conflict.

However, its advocates have been both retired and active Army members, as well as right-wing politicians and businessmen in the country, since it precisely prevented justice being served to these officers –who are seen as responsible for frustrating the victory of the FMLN.

“All the crimes committed were motivated by an attack by the guerrilla”, claimed retired general Humberto Corado, former Defence Minister between 1993 and 1995.

The now repealed act was passed only five days after the Truth Commission, mandated by the United Nations to investigate human rights abuses during the civil war, had published its report with 32 specific cases, 20 of which were perpetrated by the Army and 12 by insurgents.

Among those cases were the murders of archbishop Oscar Arnulfo Romero in March 1980; four American nuns in December of the same year, and hundreds of peasants who were shot in several massacres, like those which took place in El Mozote in December 1981 and in Sumpul in May 1980.

Also, six Jesuit priests and a woman and her daughter were murdered in November 1989, a case already being investigated by a Spanish court.

The Truth Commission has also pointed to some FMLN commanders, holding them accountable for the death of several mayors who were targeted for being considered part of the government’s counter-insurgent strategy.

Some of those insurgents are now government officials, as is the case with director of Civil Protection Jorge Meléndez.

Before taking office in 2009, the FMLN, now turned into a political party, strongly criticized the amnesty law and advocated in favour of its repeal, on the grounds that it promoted impunity.

But, after winning the presidential elections that year with Mauricio Funes, it changed its stance and no longer favoured the repeal of the law. Since 2014, the country has been governed by former FMLN commander Salvador Sánchez Cerén.

In fact, the governing party has deemed the repeal as “reckless”, with the President stating on July 15 that Court magistrates “were not considering the effects it could have on the already fragile coexistence” and urging to take the ruling “with responsibility and maturity while taking into account the best interests of the country”.

After the law was ruled unconstitutional, the media were saturated with opinions and analyses on the subject, most of them pointing out the risk of the country being destabilized and on the verge of chaos due to the countless number of lawsuits that could pile up in the courts dealing with war cases.

“To those people who fiercely claim that magistrates have turned the country into a hell we must respond that hell is what the victims and their families have gone –and continue to go- through”, reads the release written on July 15 by the officials of the José Simeón Cañas Central American University, where the murdered Jesuits lived and worked in 1989.

Furthermore, the release states that most of the victims demand to be listened to, in order to find out the truth and be able to put a face on those they need to forgive.

In fact, at the heart of the debate lies the idea of restorative justice as a mechanism to find out the truth and heal the victims’ wounds, without necessarily implying taking perpetrators to jail.

“We do not want them to be jailed for a long period of time, we want perpetrators to tell us why they killed them, given that they knew they were civilians”, stressed Echeverría.

“And we want them to apologize, we want someone to be held accountable for these deaths”, she added.

In the case of Montenegro, himself a victim of illegal arrest and tortures in 1986, he said that it is necessary to investigate those who committed war crimes in order to find out the truth but, even more importantly, as a way for the country to find the most suitable mechanisms to forgive and provide redress”.

However, general Corado said that restorative justice was “hypocritical, its only aim being to seek revenge”.