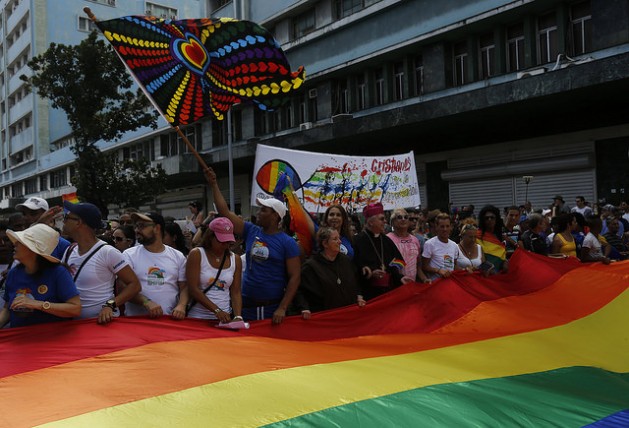 UNITED NATIONS, Jul 1 2016 (IPS) - Human rights groups have described the UN Human Rights Council’s (HRC) decision on Thursday to appoint an independent expert to target the ongoing discrimination of lesbian, gay, bisexual, transgender and intersex (LGBTI) people all over the world as a “historic victory.”

“For LGBTI people everywhere who have fought so hard for this victory, take strength from this recognition, and let today represent the dawn of a new day,” OutRight International’s executive director Jessica Stern said. OutRight International was one of 28 non-governmental groups which welcomed the resolution with a joint statement.

More than 600 nongovernmental organizations helped ensure that the HRC in Geneva adopted the resolution to “protect people against violence & discrimination based on sexual orientation and gender identity”.

The establishment of an expert-position for these problems is a significant step since not all of the UN’s 193 members see eye to eye on LGBTI issues. “A UN Independent Expert sends a clear message that violence and discrimination based on sexual orientation and gender identity are a concern for the international community and need to be addressed by Member States,” John Fisher of Human Rights Watch told IPS.

With regard to compliance, Fisher said: “Of course, some States will decline to cooperate, which only underlines the need for the outreach work that an Independent Expert will conduct. Members of the Human Rights Council are required by a GA (General Assembly) resolution to cooperate with the Council and its mechanisms.”

The American Civil Liberties Union (ACLU), one of the biggest defenders of LGBT rights in the United States, expressed its approval, too. Jamil Dakwar, ACLU’s International Human Rights Director, told IPS the HRC resolution “is yet another affirmation that the promise of universal human rights leaves no one behind.”

He also emphasized that “even in a country like the United States, where some LGBT rights are legally recognized, recent events, including the tragic mass shooting at an LGBT club in Orlando and the post-marriage equality legislative backlash against transgender people, confirm that the human rights of LGBT communities are in dire need of attention and protection.”

Indeed, although many states are making progress, LGBTI people still face discrimination and violence. According to studies, between half and two thirds of LGBTI students in the US, UK and Thailand are bullied at school and thirty percent of them skip school to avoid the trouble.

In the past years, violence, particularly against transgender people was shockingly common. For example, the 2014 report of the Anti-Violence Project showed that police violence was 7 times more likely to affect transgender people than non-transgenders. The 2015 report, released this June, revealed that 67 percent of victims of hate violence related killings of LGBTQ people were transgender.

A study released this week shows that there are 1.4 million transgender persons living in the United States: Twice as many as previously estimated. Although the US is slowly addressing some issues related to LGBT rights, such as removing barriers for transgender persons in the military some states have begun banning transgender people from using the bathroom according to the gender they identify with.

Human Rights Watch and others are happy to witness progress in states like the US and many Latin American countries. There was a clear pattern in the voting behavior of Thursday’s HRC meeting, too. No African and few Asian countries (only South Korea and Vietnam) voted in favor of the resolution. The 18 votes against the new resolution came among others from Russia, China and various Arab States.

The non-governmental actors who supported the resolution, however, also came from developing countries. “It is important to note that around 70 percent of the organizations are from the global south,” Yahia Zaidi of the MantiQitna Network said.

The resolution builds on previous HRC decisions in 2011 and 2014. In the newest draft, the independent expert is the most important innovation. Still, other parts of it were debated, too:

“Some amendments were adopted suggesting that cultural and religious values should be respected; these amendments could be interpreted as detracting from the universality of human rights. The resolution does, however, also include a provision from the outcome document of the Vienna World Conference on Human Rights, affirming the primacy of human rights,” Fisher reported from the council in Geneva.