The Dark Road to Peace in South Sudan

The Rev. Gabriel Odima is President of the Africa Center for Peace and Democracy. 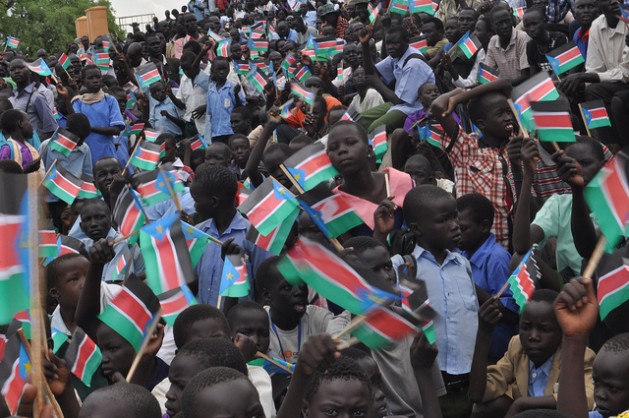 ST. PAUL, Minnesota, USA, Jul 13 2016 (IPS) - The dark road to Peace in South Sudan began with the manner in which the Machakos Peace agreement was crafted.

The political leadership of South Sudan, the Regional leaders of the The Intergovernmental Authority on Development (IGAD), the Africa Union and the International community must rise above their geopolitical interest and bring the suffering of the people of South Sudan to an end. For the most part, poor leadership and lack of political freedom have played a significant role in the current situation in South Sudan.

The African Union has failed to provide political leadership in the continent of Africa. The African Union formerly known as the Organization of African Union (OAU), was founded in May of 1963 in the Ethiopian capital of Addis Ababa. On the eve of the meeting of leaders of newly independent Africa, one of their members, the elected president of Togo, was assassinated. His elected government was overthrown, the Constitution of Togo”suspended”and a military junta was installed to govern the country. This tragedy was expressed only in the corridors of the hotel rooms and not in the conference hall; nor was a resolution of condemnation moved and debated. This week, African leaders will gather in the Rwandan capital of Kigali and again a new tragedy unfolding in South Sudan will likely only be expressed in the corridors of the hotel rooms.

The International community has constantly ignored the voice of the people of South Sudan and instead listened to the voice of the gun men and some of the Regional leaders who have also come to power through the gun. These regional leaders and the Gun men are politically impotent. There is a need to change strategy for the sake of Peace.

When the gun began to replace the ballot as means to install rulers, massacres, devastations, and suppressions of human rights and freedoms became the leading force of governance in South Sudan.

South Sudan’s political leaders, and their regional backers, should be held accountable for the atrocities committed in this young country, which has only just celebrated its five year anniversary.

Besides the gun, violence and insensitivity to other people’s rights and freedoms, South Sudan’s leadership have developed the art of concealing their  unsavoury  motives and deeds into a very fine art. A situation which  has laid hundreds of villages to waste and left homes, granaries, farms, schools, dispensaries and boreholes have been destroyed by both the soldiers of the regime and the rebels.

The agonies of the people and the loss of lives and property in South Sudan, Uganda and  Burundi, are not isolated cases. In Africa, the oases  of  Democracy and observance of Human Rights and the voice of the African Union or the UN Security Council in support for their development are few, feeble and far between.

The effort to sustain peace and unity in South Sudan is going to  be a challenge to the political leaders of South Sudan, IGAD, the AU and the international community. A cursory examination of  that unity and peace in South Sudan will be found to be  hollow. The trickery and the disingenuousness  in the provision of the current peace agreement cannot sustain stability in South Sudan.

The fear of competitive politics in African countries like Uganda, Burundi and South Sudan  is the leading cause  of conflict. This fear, has developed in Africa into paranoia which has caused considerable unnecessary deaths and suffering in many African countries.. This instability in many African countries and especially the current situation  in South Sudan,involving loss of  lives, destruction of property, displacement of thousands of people and full scale violation of human rights will continue to be a major policy challenge for the international community.