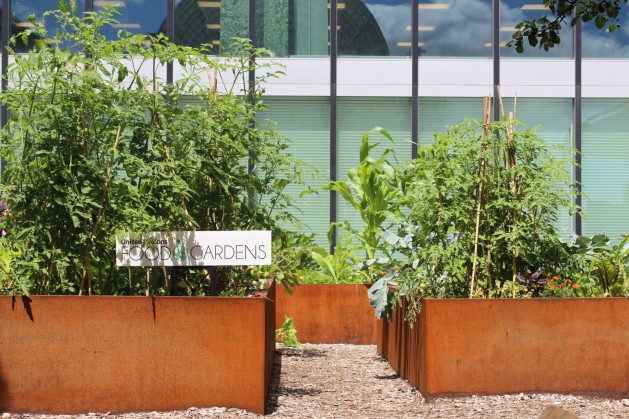 NEW YORK, Jul 11 2016 (IPS) - Habitat III, the UN’s conference on cities this coming October will explore urban agriculture as a solution to food security, but here in New York City, it has shown potential for much more.

Record-high levels of inequality are being felt most prominently in the world’s cities. Even In New York City, the heart of the developed world, many urban communities have food security issues.

Since the year 2000, New York City food costs have increased by 59 percent, while the average income of working adults has only increased by 17 percent.

Forty two percent of households in the city lack the income needed to cover necessities like food, shelter, clothing, transportation, and healthcare but still earn too much to qualify for government assistance.

Last year, OneNYC was introduced, a plan specifically aligned with the United Nation’s Sustainable Development Goals, aiming to lift 800,000 people out of poverty in a decade.

“OneNYC has high expectations and they are working hard in terms of addressing equity in the food systems, waste, and making sure that more and more of its citizens have access to good, healthy food.” Michael Hurwitz, director of GrowNYC’s Greenmarket, which has been working on OneNYC, told IPS.

“In a city like New York City, urban agriculture can play a number of roles on top of feeding people, from education to safe spaces, and helping off-set food budgets.” Hurwitz told IPS.

"Within two months, a tough corner had become a corner of great, wonderful activity and it was because there were young people from the neighbourhood selling food to their neighbours.” -- Michael Hurwitz

Urban agriculture plays a significant role in feeding urban populations around the globe. The Food and Agriculture Organization of the United Nations reports that 800 million people worldwide grow vegetables or fruits or raise animals in cities, producing what the Worldwatch Institute reports to be an astonishing 15 to 20 percent of the world’s food.

There are parts of the world where urban and peri-urban agriculture account for 50-75% of vegetable consumption within that city.

In Africa, it is estimated that 40 percent of the urban population is engaged in agriculture. Long-time residents and newcomers farm because they are hungry, they know how to grow food, land values are low, and fertilizers are cheap.

In the U.S., though, urban farming is likely to have its biggest impact on food security in places that, in some ways, resemble the global south —  that is, in cities or neighborhoods where median incomes are low and the need for affordable food is high.

Hurwitz saw this transformative power of agriculture when he was a social worker in Redhook, Brooklyn, a community where 40 percent of households were making less than $10,000 a year. He was working in community gardens with 16-17 year-olds in a court diversion program. The food that the kids grew, they took home or sold at farmer’s markets, local restaurants and stores.

“Our youth became leaders of change in their communities. A lot of the kids we worked with were kids that nobody else wanted to work with, but when they became the main source of healthy food in their neighbourhood at the organic farmers market, peers and adults would see that they were the ones actually bringing change to the community.”

This system is now significantly scaled up through GrowNYC, a non-profit that operates from NYC Mayor Bill de Blasio’s office. GrowNYC works with 6,000 kids a year through tours, providing materials for teachers to use in their classrooms. Its sister program Grow to Learn manages all of the school gardens in NYC. It also runs a “Mini-grant program” and technical assistance and training for teachers to run the gardens.

As a specific case of development, the South Bronx, ranked the poorest of 435 congressional districts in the U.S.A. in 2010.  Home to 52,000 low-income New Yorkers, with nearly half (42%) below the poverty line, this NYC district has been called a “food desert”.

When GrowNYC went into one section in the Bronx, a police officer warned them: “You don’t want to come here, it’s just not safe,” Hurwitz remembers. “But within two months, a tough corner had become a corner of great, wonderful activity and it was because there were young people from the neighbourhood selling food to their neighbours.”

For years, GrowNYC’s “Learn it, Grow it, Eat it” Program has been working with schools in the South Bronx, helping people become environmental leaders, Hurwitz says. That program operated one of GrowNYC’s youth-run farm stands, training youth in entrepreneurial, business and agriculture to run their own farm stands.

“We’ve seen kids who started in our youth market go on to be managers within the program,” Hurwitz said.

In New York, it’s not just about producing a standardized bulk amount of food for communities in need, but reflecting the diverse cultures. “We have farmers in our program that are growing $150, 000 worth of food on an acre and a half in Staten Island,” according to Hurwitz. On this farm, Mexican growers are growing Mexican-specialty crops, to feed to the Mexican community in Staten Island who otherwise would not have access to traditional foods that they are accustomed to.

The big greenhouse operators are now moving in and have become all the rage. But growing a limited variety of high-end greens is not going to feed the urban population alone. “I would rather see the $2 million being spent preserving rural farms with the goal of feeding the urban population. That can play a crucial role in getting food into cities, ensuring everybody has access to that food, and making sure that farmland remains viable and affordable”, Hurwitz contends.

The number of people living in cities is expected to double in the next thirty years according to the Atlas of Urban Expansion.

The Habitat III, the UN’s conference on cities this October will be the first time in 20 years that the international community has collectively paid attention to the impacts of urbanization, and will form a new global urbanization strategy — the “New Urban Agenda.”.

“Food security is one of the big issues that is going to be dealt with in Habitat III in relation to urbanization” said Juan Close, director of UN Habitat said here last week.