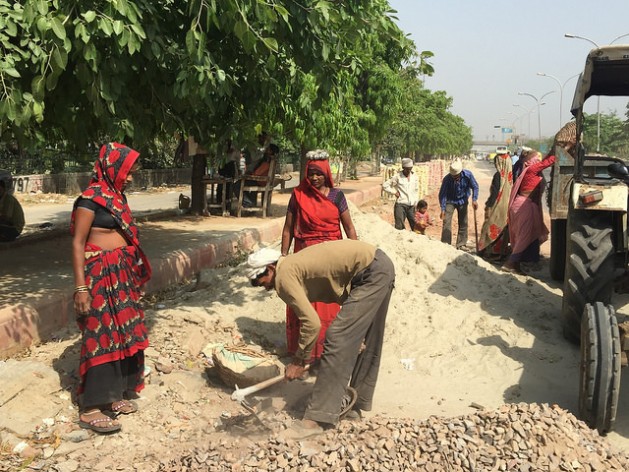 The new law will benefit only a miniscule percentage of women employed in the organised sector while ignoring a large demographic toiling in the country's unorganised sector such as contractual labour, farmers, casual workers, self-employed women and housewives. Credit: Neeta Lal/IPS

NEW DELHI, Aug 19 2016 (IPS) - The passage of the landmark Maternity Benefits Act 1961 by the Indian Parliament, which mandates 26 weeks of paid leave for mothers as against the existing 12, has generated more heartburn than hurrahs due to its skewed nature.

The law will also facilitate ‘work from home’ options for nursing mothers once the leave period ends and has made creche facilities mandatory in establishments with 50 or more employees. The amendment takes India up to the third position in terms of maternity leave duration after Norway (44 weeks) and Canada (50).

However, while the law has brought some cheers on grounds that it at least acknowledges that women are entitled to maternity benefits — crucial in a country notorious for its entrenched discrimination against women and one that routinely features at the bottom of the gender equity index — many are dismissing it as a flawed piece of legislation.

The critics point out that the new law will benefit only a miniscule percentage of women employed in the organised sector while ignoring a large demographic toiling in the country’s unorganised sector such as contractual workers, farmers, casual workers, self-employed women and housewives. 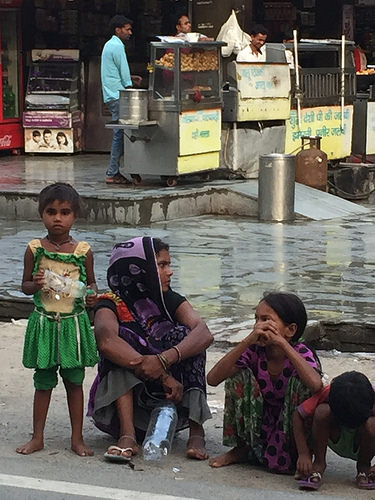 Poor women working as labourers in India are deprived of any maternity benefits. Credit: Neeta Lal/IPS

According to Sudeshna Sengupta of the Right to Food Campaign, India sees 29.7 million women getting pregnant each year.

“Even if the law is fully implemented,” the activist told IPS, “studies show that it will benefit only 1.8 million women in the organised sector leaving out practically 99 percent of the country’s women workforce. If this isn’t discrimination, what is? In India, women’s paid workforce constitutes just 5 percent of the 1.8 million. The rest fall within the unorganised sector. How fair is it to leave out this lot from the ambit of the new law?” asks Sengupta.

Kavita Krishnan, secretary of the All India Progressive Women’s Association (AIPWA), opines that maternity benefits should be universally available to all women, including wage earners.

“But the act ignores this completely by focussing only on women in the organised sector. In India most women are waged workers or do contractual work and face hugely exploitative work conditions. They are not even recognised under the ambit of labour laws. The moment a woman becomes pregnant she is seen as a liability. The new law has no provisions to eliminate this mindset, ” Krishnan told IPS.

Some of the employed women this correspondent spoke to say that a woman’s pregnancy is often a deal breaker for employers in India. Sakshi Mehra, a manager with a garment export house in Delhi, explains that though initially her employers were delighted with her work ethic, and even gave her a double promotion within a year of joining, “things changed drastically when I got pregnant. My boss kept dropping hints that I should look for an ‘easier’ job. It was almost as if I’d become handicapped overnight,” Mehra told IPS.

Such a regressive mindset — of pregnant women not being `fit’ — is common in many Indian workplaces. While some women fight back, while others capitulate to pressure and quietly move on.

Another glaring flaw in the new legislation, say activists, is that it makes no mention of paternity leave, putting the onus of the newborn’s rearing on the mother. This is a blow to gender equality, they add. Global studies show lower child mortality and higher gender equality in societies where both parents are engaged in child rearing. Paternity leave doesn’t just help dads become more sensitive parents, show studies, it extends a helping hand to new moms coming to grips with their new role as a parent.

According to Dr. Mansi Bhattacharya, senior gynaecologist and obstetrician at Fortis Hospital, NOIDA, Uttar Pradesh, there’s no reason why fathers should not play a significant role in childcare.

“Paternity leave allows the father to support his spouse at a critical time. Also, early bonding between fathers and infants ensures a healthier and a more sensitive father-child relationship. It also offers support to the new mother feeling overwhelmed by her new parental responsibilities,” she says.

A research paper of the Organisation for Economic Co-operation and Development (OECD) — a think-tank of developed countries — says children with ‘more involved’ fathers fare better during their early years. Paternity leaves with flexible work policies facilitate such participation.

Paternity leave is also a potent tool for boosting gender diversity at the workplace, especially when coupled with flexi hours, or work-from-home options for the new father, add analysts. “Parental leave is not an either/or situation,” Deepa Pallical, national coordinator, National Campaign on Dalit Human Rights told IPS. “A child needs the involvement of both parents for his balanced upbringing. Any policy that ignores this critical ground reality is a failure.”

The activist adds that granting leave to both parents augments the chances of women returning to their jobs with greater peace of mind and better job prospects. This benefit is especially critical for a country like India, which has the lowest female work participation in the world. Only 21.9 percent of all Indian women and 14.7 percent of urban women work.

Women in India represent only 24 percent of the paid labour force, as against the global average of 40 percent, according to a recent McKinsey Global Institute report. At 53 percentage points, India has one of the worst gender gaps (disproportionate difference between the sexes) in the world when it comes to labour force participation, World Bank data shows. The economic loss of such non-participation, say economists, is colossal. Lakshmi Puri, assistant secretary-general of UN Women, noted in 2011 that India’s growth rate could ratchet up by 4.2 percent if women were given more opportunities.

According to a World Bank report titled “Women, Business and the Law” (2016), over 80-odd countries provide for paternity leave including Iceland, Finland and Sweden. The salary during this period, in Nordic countries, is typically partly paid and generally funded by the government. Among India’s neighbours, Afghanistan, China, Hong Kong and Singapore mandate a few days of paternity leave.

Perhaps India could take a page from them to address an issue which not only impacts nearly half of its 1.2 billion population, but also has a critical effect on its national economy. The right decision will not only help it whittle down gender discrimination and improve social outcomes, but also augment its demographic dividend – a win-win-win.