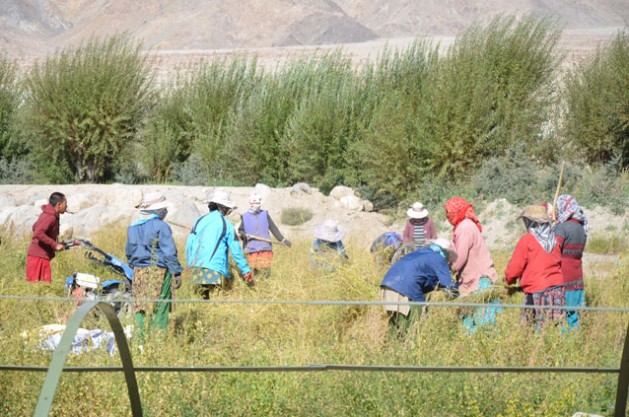 NEW DELHI, Jan 8 2016 (IPS) - Women constitute nearly half of the country’s 1.25 billion people and gender equality — whether in politics, economics, education or health — is still a distant dream for most. This fact was driven home again sharply by the recently released United National Development Programme’s Human Development Report (HDR) 2015 which ranks India at a lowly 130 out of 155 countries in the Gender Inequality Index (GII). India trails behind most Asian countries, including lesser developed Bangladesh and Pakistan which rank 111 and 121 respectively, and fares not much ahead of war-ravaged Afghanistan at 152.

The GII reflects gender-based inequalities on three vital parameters: reproductive health, empowerment, and economic activity. India’s record, dismal on all three counts, is especially disquieting when it comes to representation of women in Parliament. Just 12.2 per cent of parliamentary seats in the world’s largest democracy are held by women as against 19.7 in Pakistan, 20 in Bangladesh and 27.6 percent in Afghanistan. Even some of the poorest nations — such as Tanzania, Zimbabwe, Rwanda, Uganda, Mozambique — are way ahead by having over a third to half of their parliament seats occupied by women.

Health remains a niggling worry as well with Indian women’s maternal mortality rate (MMR) being one of the world’s highest. The country witnesses 190 deaths per 100,000 live births as compared to 170 pregnancy-related deaths per 100,000 births in both Bangladesh and Pakistan, states the HDR. Even in terms of the percentage of women receiving secondary education, Bangladesh at 34 per cent outsmarts India at 27 per cent. On labour force participation rate for women, as compared to Bangladesh’s 57 per cent, India is at 27 per cent.

The only parameter where India scores marginally better is the adolescent birth rate or the number of births per 1000 women aged 15 to 19 years. Here, over the last couple of years, India’s GII values have improved marginally from 0.61 to 0.563.

However, activists say India’s low GII scores are hardly surprising given the country’s fierce resistance to change and entrenched patriarchal mindsets. “We’ve been featuring at the bottom of the gender equity pyramid for years. So what’s new?” Dr. Ranjana Kumari, Director, Center for Social Research, a New Delhi-based non-profit, told IPS. “Though the gender agenda has higher visibility in India now, that positive momentum hasn’t really translated into higher investment for women in different sectors due to continued discrimination and ineffectual laws and policies.”

Kumari points out that one of the most pivotal instrument of change — the Women’s Reservation Bill, which seeks to grant 33 per cent of the Parliament’s seats to women — has still not been passed by the upper house (Rajya Sabha) despite being cleared by the lower house (Lok Sabha) in 2010.

“The non-passage of the Bill due to splintered views of different political parties has severely inhibited women’s participation in politics. Until this basic requirement is addressed, Indian women can’t truly be empowered,” observed the activist.

According to some women politicians, bias underlines the selection of women as political candidates. National and regional Indian parties continue to follow the policy of exclusion while allotting seats to women. The common perception is that they lack the ‘win-ability’ factor. Those who manage to win elections have to work doubly hard to prove themselves as compared to the men,” one senior woman politician told IPS on the condition of anonymity.

The current gender picture appears even more disconcerting, say experts, as the principle of gender equality as enshrined in the Indian constitution. The framework of Indian laws, development policies, plans and programs too, are aimed at women’s advancement and equality. India, also a signatory to the Millennium Declaration adopted at the United Nations General Assembly in September 2000, has reaffirmed its commitment towards promoting gender parity.

“These goals are not only desirable in themselves but are critical for achieving UN’s other Millennium Development Goals,” opines Dr. Abha Khatri, former professor of political science at Delhi University. “These include 33 per cent reservation for women in local bodies, state legislatures and Parliament; elimination of all forms of violence against women; skill development for women; making women’s participation in education safe and secure; elimination of sex selection before birth; and universal access to sexual and reproductive health.”

The benefits of India becoming a 2-trillion dollar economy, Asia’s third largest, have also not percolated down to its women, point out economists. On the contrary, Indian women’s workforce participation has plummeted from 35 per cent in 1990 to 27 per cent in 2013. According to a 2012 report on global employment trends by the International Labour Organisation, many Indian women are able to find only marginal work in the informal economy, with low wages and little or no job security. 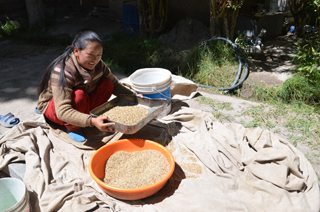 Well-qualified young urban women too, admit to having limited job options. Though over 60 per cent of urban females are a part of the informal sector, unemployment among those with graduate degrees and above qualifications continues to be a high 15.7 per cent, states the report.

The example of Archana Desai, 35, is illustrative. New Delhi-based Desai had to give up her job at a global retail chain when it started downsizing due to budget cuts. Despite an MBA degree, Desai is currently employed as a part-time tutor at a coaching institute earning a fraction of her previous salary. “Though I’m technically qualified to hold a manager’s position, I’m stuck with something I don’t have any passion for. Why can’t the government provide jobs for women like us?”

Addressing women’s unemployment or underemployment issues can be deeply transformative for the country’s economy, says a McKinsey Global Institute report, “The Power of Parity: Advancing Women’s Equality in India”. The report states that improving gender parity at the workplace can help India add a whopping 2.9 trillion dollars to its GDP in 2025.

If this isn’t incentive enough, what is question activists. Besides, Indian women constitute almost 30 per cent of the total workforce in the country. Stricter policy and legislative measures need to be adopted as there is statutory recognition of the principle of equal job opportunities and equal pay under the Equal Remuneration Act, 1976.

To be fair, some measures have been taken by the Center to address the gender parity skew. The government has announced a 33 per cent reservation for women in police forces of union territories, including Delhi, for posts from constables to sub-inspectors to make the police more gender-sensitive. Another scheme — ‘Beti Bachao, Beti Padhao’ (Save the Daughter, Educate Her) — focuses on improving the life of the girl child in 100 districts with low child sex ratio (CSR), meaning many fewer girls than boys. The initiative is especially critical for a country like India which hosts one of the world’s lowest CSRs. Daman and Diu records a CSR of 618 girls per 1,000 boys.

“The key to achieving gender parity is resources. We need gender-responsive budgeting and money to be allocated and spent effectively on achieving these goals,” elaborates Kumari. Any breakthrough on gender equality also requires changes in the mindsets of all stakeholders –including legislators, administrators as well as the public — so that every social, economic and political issue can be made gender-sensitive, sums up the activist.