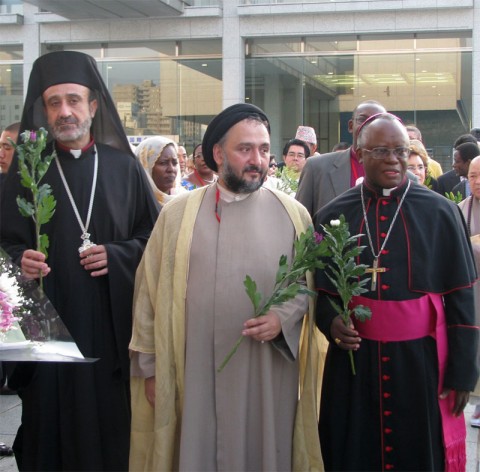 Christian and Muslim leaders at the Global Network of Religion for Children (GNRC) Third Forum in 2008. Credit: Lynette Lee Corporal/IPS

NEW YORK, Aug 16 2016 (IPS) - The French philospher Voltaire once said that “if we believe in absurdities, we shall commit atrocities.”

Indiscriminate killing of self and innocent others, ostensibly in the name of some religion, is among the most absurd of beliefs. And rather than ceasing, the spiral of violence appears to know no end. There appears to be no locus, and no focus, beyond random killing.

Many a document and statement delivered in policy, academic and developmental fora, speaks to ‘preventing violent extremism’ and developing ‘counter narratives’ thereto. Bywords that have become so popular they acquired their own acronyms.

In January 2016, UN Secretary-General Ban Ki-Moon presented his Plan of Action to Prevent Violent Extremism to the UN General Assembly. The plan was welcomed by the UN member states through a resolution adopted in February.

In the plan, Ban called for a comprehensive approach, encompassing not only essential security-based counter-terrorism measures but also systematic preventive steps to address the underlying conditions that drive individuals to radicalize and join violent extremist groups.

Yet looking back, the General Assembly had already adopted a Global Counter-Terrorism Strategy in September 2006. At the time the strategy was dubbed a “unique global instrument to enhance national, regional and international efforts to counter terrorism”.

The strategy was considered a first, with UN member states agreeing to a common strategic and operational approach to fighting terrorism.

Some argue that fighting terrorism and preventing violent extremism, while related, are different endeavours. It can legitimately be noted that most governments have indeed invested a great deal of effort, singularly and with the support of the UN, to countering terrorism – with varied degrees of success.

It is certainly also true that since 2006 addressing these problems has become increasingly complicated. It was after 2006 that the tumult of the Arab-Spring-turned-hell happened, and the plague of ISIS/ISIL and its horrors started to unfold.

Many a humanitarian crisis (man-made and conspired to by nature itself) has also since transpired, from events in the Ukraine to disputes over small islands in the South China See to complicated political, financial and drug and weapon-related transactions in South America. Not to mention the ‘crisis’ of refugees and migrants.

All the while planet earth is getting warmer, with devastating results. Indeed the worlds’ share of crisis has expanded significantly since 2006, so it is rather understandable that in the midst of all that, attempts to ‘counter terrorism’ may not have gone according to ‘the plan’.

Meanwhile, violent extremism, particularly the religious variety, dominates the news and headlines. The second holiest site of the Islamic faith has come under attack, one of a series of such attacks now raising condemnation from both Sunni and Shia Muslims alike – notable in a time of rising sectarian tensions.

It is clear that violent extremism, in the name of (at least one) religion, is a many headed serpent which few governments can deal with, let alone eliminate. For the UN, as an intergovernmental entity of 193 governments, the challenges facing these governments are not only mirrored, but magnified.

Amid this context it is disappointing a meeting of more than 200 religious leaders and faith-based development and humanitarian NGOs (FBOs) at the World Humanitarian Summit (WHS), in Istanbul in May went virtually unnoticed by the ‘recorders of history.’

These faith leaders and FBOs did not use violence, nor did any of them even hint at a single incendiary comment. Rather, these critical humanitarian actors with influence over hundreds of millions of hearts and minds, came together to show their solidarity with the rest of the global community gathered at the WHS.

In an unprecedented move at this time of history, they discussed and argued civilly, prayed together, and joined fellow humanitarian actors to debate, illuminate and to commit to multiple initiatives. Most significantly, they assembled as religious actors to make commitments to working together to abide by international human rights and international humanitarian laws.

They represented every religion and every region of the world, men and women, young and older, of every ethnicity and race and agreed to a Charter of Faith-Based Humanitarian Action.

The Sphere Project includes some of the largest humanitarian FBOs, such as Caritas and World Vision, as well as umbrella NGO and FBO entities such as InterAction and ACT Alliance. Between them, the humanitarian budgets of these FBOs, and the investments they each make in time, human resources, unprecedented outreach and as first responders within communities across the world, is very hard to parallel. Yet as critical as this endeavour is, the fact remains that those FBOs involved in the Sphere were overwhelmingly Christian ones, and mostly western-based.

By comparison the religious groups meeting at the WHS were all encompassing, in every sense of the word, prompting many to describe it as “a very special event.” Some even had tears in their eyes as they listened to one speaker after another not only berate the secular humanitarian world for not taking faith into account, but also detailing decades’-long histories of humanitarian service to communities – in line with the calling of the faith tradition. Many have gone back to their countries – including ones as diverse as Sierra Leone, Mexico, Egypt, Malta, India and Sri Lanka – taking forward the commitments made in the Charter of Faith-Based engagement. And still there was not even a hint of this moment, nor of these participants, in the Chair’s Summary presented by the UN Secretary-General at the end of the WHS.

The WHS website, many a news’ write-up and reports detail impressive lists of actions and commitments made at the Summit, by governments, NGOs, media and the private sector. They are innovative, priceless, and urgently needed.

At the same time, we rightly castigate the ISIS/ISIL’s of this world for violating the sacred: scorching human lives, desecrating beliefs and seeking to erase heritage, all while we seek to reinvent the wheel of “counter-narratives” to religious extremism.

But are we not at fault for ignoring, or taking for granted, those 200 voices of experience, representing millions of peoples around the world, raised in solidarity with justice, in conformity with human rights, and in tried and tested service to humanitarianism and human dignity?

How do we respect the sacred and help preserve a heritage, when we fail to even acknowledge – let alone celebrate – the efforts of faith-based actors who come together to serve – and save – millions of human lives?

All the opinions expressed herein reflect those of the author alone and do not represent the perspectives or positions of any institution, board or territory.