The Rev. Gabriel Odima is President & Director of Political Affairs at the Africa Center for Peace & Democracy. 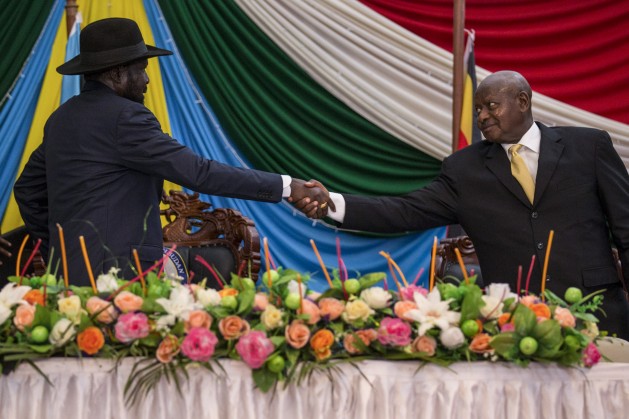 St. Paul, Minnesota, USA, Sep 27 2016 (IPS) - Uganda has and continues to play a major role in fueling the conflict in South Sudan. The recent events in South Sudan have brought that moral challenge into a very sharp focus.

The banishment of democracy from and suppression of the human rights of the citizens in South Sudan have persisted for the last five years since the birth of the nation. What appeared to be a hidden agenda is beginning to emerge in South Sudan.

These sad events in South Sudan have some similarities with events in Uganda. In 1981 thirty five years ago and fifteen days after elections in Uganda, President Yoweri Museveni plunged Uganda – where peace had returned following the fall of Idi Amin – to war. Museveni launched the war in what became known as the Luwero Triangle, a district adjacent to and north of Kampala, the capital of Uganda.

The war was a direct attack on democracy. It made the policy and work of the newly elected government in healing and reconciliation, development, rehabilitation, and transformation towards a culture of peace extremely difficult.

Like the case of South Sudan, the international community turned a blind eye. The continued support of Museveni’s rule in Uganda for the last 30 years raises very serious concern regarding the implications of U.S. foreign policy in Africa. The circumstance in which Museveni launched his war against the constitution and people in February 1981 exposed most clearly that he is a man of violent disposition who has a thirst for power in its most naked and atavistic form. Single handed, Museveni has exported this violent approach to South Sudan.  Indeed, all the subsequent wars which he waged in Luwero, Northern Uganda, Eastern Uganda, Rwanda, Burundi, DR Congo and South Sudan were totally unnecessary and cannot be justified.

During the Luwero war, Museveni and his army exhibited a very high degree of a most ignoble mendacity- not only as a war exigency but also as a means to conceal their crimes against humanity. They would, for instance, attack a village posing as government troops, cause much havoc, including massacres, and then on cue, the aggressors would hurriedly depart from the scene only for second unit of Museveni’s army to conveniently arrive to rescue the village from”government troops”. The second unit using a combination of persuasion and coercion would then cause the exodus of the villages to fortresses under the control of the insurgents after ransacking and destroying much of and in the village. The ignoble mendacity in the fact that at the time those atrocities were committed by Museveni’s army, road, foot paths and even  cattle tracks had been heavily manned by them and government troops were nowhere in the interior of Luwero District or in the village.

In 1971, the international media uniformly described Idi Amin repeatedly and for a whole year as " the gentle giant".

It became routine and an article of faith in Museveni’s subsequent wars in Northern Uganda, East, West Uganda, as well as in Rwanda, DR Congo and South Sudan, for atrocities committed by his army to be credited to his victims.

Those who are in the position to help the people of South Sudan to find and form a basis for harmony and rebuilding of South Sudan carry a very heavy burden and responsibility.

The Ugandan military regime, right from its installation in 1986 by the gun and bloodshed, has consistently, arrogantly and cynically suppressed and never permitted the citizens and their organized political parties to enjoy the freedom to hold opinions on political or public matters except the opinion of the regime. The fact that never, in the past, had the people of Uganda known so much death, oppression and repression as under the present military regime has been and is still being strenuously concealed by world leaders.

The cause of Democracy and the enjoyment by the citizens of human rights and freedoms have suffered in Uganda and South Sudan and will continue to suffer so long as politicians, church leaders and foreign governments and media give support and credibility to oppressive and repressive regimes established by the gun. The support and the credibility sometimes give the impression that the givers have removed the victims, that is, the oppressed citizens from the human race.

The general trend has been in many African countries for the Church leadership, politicians, the media and the international community to turn a blind eye on the atrocities in Uganda and South Sudan.

There are several reasons for the silence of these groups on democracy and observance of human rights in Uganda and South Sudan. Two of them stands out. The first is the tendency of both the spiritual and laity Christian leaders in a country faced with a difficult political or economic situation to accept wittingly or unwittingly a regime established by the gun and bloodshed. The second is the powerful influence of external forces namely, foreign governments, international media and human rights organizations when they give support and accolades to regimes established by the gun and bloodshed.

In 1971, the international media uniformly described Idi Amin repeatedly and for a whole year as “the gentle giant”. The evidence of massacres and terror by Amin’s soldiers was of no interest to the media until much later. Foreign governments also showed no interest in the evidence and Amnesty International, for instance, never reported even once throughout Amin’s rule of over eight years on the observance of human rights in Uganda.

In the case of South Sudan and Uganda, for instance, the military regime waged vicious wars to hold on to power and to ignore the lives of their citizens. There will be no peace in South Sudan as long as President Museveni of Uganda continues to play a role in fueling the conflict there.

The promotion and development of democracy and its attendant enjoyment of human rights by the citizen is under attack in Uganda and South Sudan not only by those holding the guns but also by the donors who provide funds indiscriminately. The donors know that no military regime in Africa, from Kampala through Juba is accountable to the people but still credit such regimes with accountability.

It is amazing and foreboding of hard and evil days ahead for Africa that although for the past 50 years, African countries have been largely ruled either by military dictators or single parties, opinions in the donor countries which have been in recent years strongly against single party rule are now shifting towards and in favor of military rule and against multiparty rule.

The views expressed in this article are the author’s own and do not necessarily reflect IPS’s editorial policy.