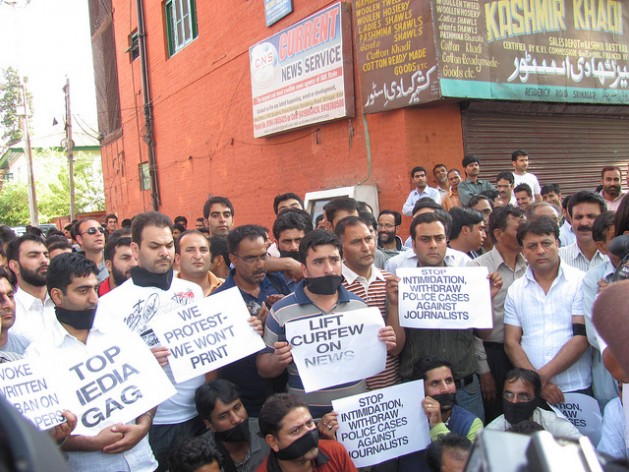 Kashmiri journalists at a rare protest against a government clampdown on freedom of expression in 2012. Credit: Athar Parvaiz/IPS

UNITED NATIONS, Sep 30 2016 (IPS) - The UN Human Rights Council (UNHRC) advanced its commitment to the safety of journalists after adopting a groundbreaking resolution with measures for states to ensure journalist protection. But this is only the first step, many note.

Though the UNHRC has adopted resolutions on the safety of journalists in the past, some note that this year’s resolution is more comprehensive in protecting the rights of freedom of expression and the press.

“[The resolution] brings up these issues more explicitly than it has been brought up in other resolutions,” Committee to Protect Journalists’ (CPJ) Advocacy Director Courtney Radsch told IPS.

She stressed that the resolution acknowledges the role that states play in committing violence against journalists and in creating a permissive environment for the safety of journalists.

“It is not simply enough to talk about the safety of journalist without also addressing the need to create an environment in which freedom of expression and press freedom can flourish,” she stated.

Reporters Without Borders’ (RSF) Advocacy and Communications Officer Margaux Ewen echoed similar sentiments to IPS, noting that the resolution is a “wonderful reiteration” which calls on member states to implement their international obligations.

China is among the members of UNHRC.

The newly adopted resolution also affirms the right of journalists to use encryption and anonymity tools. Journalists often rely on such mechanisms to safely impart information anonymously online. They are also used to encrypt their communications in order to protect their contacts and sources.

Radsch noted that these tools are essential for journalists “to do their job in the 21st century.”

The resolution also addresses the specific risks that women journalists face in their work, condemning all gender-based attacks.

The National Union of Journalists of the Philippines (NJUP) Ryan Rosauro expressed his dismay of the state of journalism in the country, stating: “We will never take any threats, whether of physical harm or to silence us, lightly for we have lost far too many of our colleagues and hardly seen justice for them,” he said.

In a joint statement with NJUP, the International Federation of Journalists (IFJ) stated that the government must take social media threats to journalists seriously and should penalise perpetrators to ensure the safety of journalists.

In their 2016 World Press Freedom Index, RSF ranked the Philippines 138th out of 180 countries in press freedom making it one of the most dangerous countries for practicing journalists.

As in previous years, the UNHRC also highlighted the need to end violence against journalists and to combat impunity for attacks.

In 2009, prominent Sri Lankan journalist and editor Lasantha Wickramatunga was beaten to death after his car was pulled over by eight helmeted men on motorcycles. Often critical of the government and its conduct in the country’s civil war, the editor had been attacked before and received death threats for months prior to his death. He even anticipated his own fate, writing an essay shortly before his death about free media in the South Asian nation.

“In the course of the past few years, the independent media have increasingly come under attack. Electronic and print-media institutions have been burnt, bombed, sealed and coerced. Countless journalists have been harassed, threatened and killed. It has been my honour to belong to all those categories and now especially the last,” Wickramatunga wrote.

Most recently, Jordanian journalist Nahed Hattar was shot dead while on his way to face charges for sharing a cartoon deemed offensive to Islam.

“The killing of Mr. Hattar is appalling, and it is unacceptable that no protection measures had been put in place to ensure his safety, particularly when the threats against him were well known to the authorities,” said UN special rapporteur on freedom of opinion and expression David Kaye.

Kaye urged authorities to bring the perpetrator to justice and to ensure legislation that allows a culture of diverse expression.

However, both Radsch and Ewen noted that the resolution is only the first step as it must be translated to action on the ground.

“We continue to see the failure of states to adequate investigate the murders of journalists…so while resolutions are important, we need to see actual concrete actions to accompany these normative statements,” Radsch told IPS.

Ewen stated that UN resolutions are “strong and strongly worded” but it still remains to be seen for states to implement measures to protect journalists and the right of freedom of expression. She pointed to RSF’s campaign to create a Special Representative to the UN Secretary-General for the safety of journalists as a way to ensure states comply with their international obligations.

Led by RSF, the Protect Journalists campaign has brought together over a 100 media organisations and human rights organisations including CPJ, the Guardian and the United Nations Correspondents Association to push for the establishment of a special representative.

During a press conference, RSF Secretary General Christophe Deloire noted that a special representative could act as an early warning and rapid response mechanism to give journalists, when threatened, access to authorities and protective measures as laid out in the resolution. He also added that a special representative with political weight can make sure the safety of journalists is integrated in all UN programs and operations.

“Every week, there are new names on new graves in journalist cemeteries…we cannot let anymore journalists be killed because of this lack of political will,” Deloire told press.

The 47-member state council adopted the resolution on the safety of journalists by consensus, expressing a deep concern for the increased number of journalists and media workers who have been killed, tortured and detained. Nations beyond the UNHRC including Austria and the United States also joined the initiative as cosponsors.