Freedom of the Press Faces Judicial Harassment in Brazil 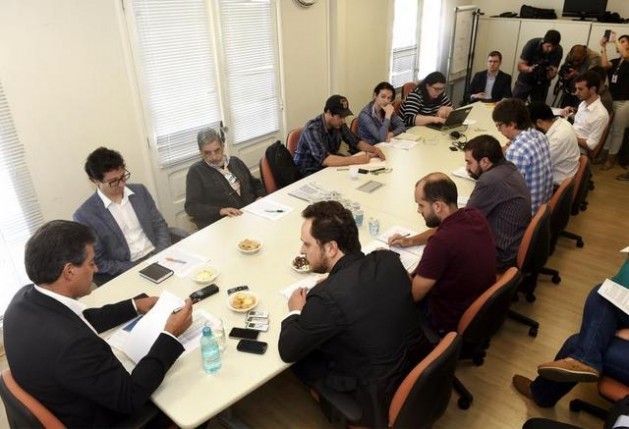 Journalists working for the Brazilian newspaper Gazeta do Povo, harassed by a series of lawsuits after reporting the high remunerations of judges and prosecutors in the southern state of Paraná, during a meeting at the newspaper’s offices with Governor Carlos Alberto Richa. Credit: PSDB

RIO DE JANEIRO, Oct 20 2016 (IPS) - The same justice that exists to ensure rights can become a tool to violate them and restrict freedom of the press, as seen with the recent wave of lawsuits against journalists and the media in Brazil.

The latest high-profile case involves the Gazeta do Povo, the main daily newspaper in Curitiba, the capital of the southern state of Paraná, which is facing 48 lawsuits from judges and public prosecutors who are suing the paper and several of its employees for reporting their incomes in February.

“There were weeks when four workdays out of five were spent running from one town to another in Paraná, to appear at hearings. I think overall we traveled more than 10,000 kilometres,” Rogerio Galindo, one of the three reporters facing legal action, told IPS.

“This happened precisely in the midst of political upheaval in the country, jeopardising the sustainability of the newspaper and revealing a great potential (for a wave of lawsuits) to cause irreversible damage, when the press already faces serious economic difficulties.” -- Mendes Junior

Elvira Lobato, a journalist who writes for the Folha de São Paulo newspaper, went through a similar ordeal after publishing a Dec. 15, 2007 article titled “Universal celebrates its 30th birthday, with a business empire”, about the obscure dealings of the evangelical Universal Church of the Kingdom of God, which owns television and radio networks and newspapers.

Lucio Flavio Pinto, an award-winning journalist who has published the independent newsletter Jornal Pessoal since 1988 in Belém, the capital of the northern state of Pará, has faced 33 legal actions brought by the local media empire “O Liberal” since 1992, after he uncovered illegal activities allegedly engaged in by its owners, the Maiorana family.

In Gazeta do Povo, three journalists, a computer graphics artist, a systems analyst, and the newspaper publishing company face legal action, accused of causing damage to the plaintiffs, who are demanding monetary compensation.

These legal proceedings have been brought in small courts scattered through dozens of towns – civil lawsuits that do not exceed 40 legal minimum monthly wages (about 11,000 dollars).

“Counting the lawyer and the driver, seven of us had our family and professional lives disturbed” from April to June, said Galindo, who underscored the case of Euclides García, who was not able to be with his wife in the last months of her pregnancy.

Fortunately, the Federal Supreme Court ordered a suspension of all proceedings, in a preliminary ruling by Judge Rosa Weber on Jun. 30, on the eve of the birth of Garcia’s son.

The lawsuits were filed in response to a Feb. 15 Gazeta do Povo article which revealed that judges in Paraná received in 2015 remuneration averaging 527,500 Brazilian reals (165,000 dollars at the current exchange rate) – 28 per cent above the ceiling set by the constitution, which stipulates that judges cannot earn more than 90.25 per cent of what Supreme Court justices are paid.

In the case of the Paraná public prosecutors, their pay was 23 per cent above the constitutional limit.

This distortion was created by payments for different expenses, compensations, retroactive payments and subsidies, which were added to salaries.

“At no time was it stated that they were illegal remunerations, but that legal accumulations resulted in amounts that exceeded the constitutional limit,” Leonardo Mendes Junior, the newspaper’s editor-in-chief, told IPS.

The information disclosed is publicly available on the government’s Transparency web site. What the newspaper articles did was put it in a legal context and point out that the judicial branch cost Brazil 1.8 per cent of GDP, compared to an average of 0.4 per cent in Europe. Lucio Flavio Pinto has won a number of international awards for his investigative reporting on corruption in the northern state of Pará, which has led to a number of lawsuits against him. Credit: Garapa.org

But the Association of Paraná Judges said in a statement that the “offensive content” in the articles suggested the presence of illegalities in the judicial branch and led to criticism of judges. They also denied having agreed on a number of individual lawsuits by its members, and that these actions threatened the freedom of press.

However, by forcing the accused to travel from town to town, some of them up to 500 kilometres away from the newspaper office in Curitiba, Gazeta do Povo’s reporting was undermined, as three of its seven political reporters were kept away from their jobs for many days.

“This happened precisely in the midst of political upheaval in the country, jeopardising the sustainability of the newspaper and revealing a great potential (for a wave of lawsuits) to cause irreversible damage, when the press already faces serious economic difficulties,” said Mendes Junior.

“It is interesting to note the concept of ‘judicial censorship’ mentioned by Carmen Lucia Rocha, the new president of the Federal Supreme Court, to describe the sequence of actions that keep away from their jobs a significant part of (a newspaper’s) journalists,” he said.

Each trip made by the defendants around the state to appear in hearings cost the newspaper about 25,000 reals (7,800 dollars), estimated Galindo, adding up costs of transport, hotels, meals and attorney’s fees, let alone the lost hours of journalistic work.

With the suspension of the legal proceedings, the journalists expect a final decision from the Federal Supreme Court, which is to take up the case as requested by Gazeta do Povo, arguing that judges in Paraná cannot try these cases since they are interested parties.

“Some of the judges have acknowledged that they cannot decide these cases, but most have not,” said Mendes.

This is an extreme case, in which justice system officials hand down rulings in their own interest, while punishing their alleged attackers with forced trips and proceedings that limit their freedom.

But the abuse of the right to sue journalists who report on awkward issues has become a common practice in Brazil.

In 2007 and 2008, the Universal Church of the Kingdom of God brought a total of 107 legal actions, filed by its followers around the country, to smother Elvira Lobato and Folha de São Paulo, Brazil’s most widely circulated newspaper. It does not really matter that the journalist and the paper won every case; the punishment preceded the judgment.

Lucio Flavio Pinto had to study law to defend himself, which took time away from his one-man publication, the Jornal Pessoal. The sales of the bimonthly newsletter, with a print run of 2,000 copies, is his source of income, since he accepts no advertising.

The legal proceedings against him lasted four to five years on average. But four lawsuits, filed 11 years ago, are still pending. Having been convicted twice, he counted on the solidarity of people all over the country to pay the monetary penalties.

In many cases, those suing him are not seeking the implementation of the sentences, he said. “They prefer to keep the sword hanging over my head, by dragging out the proceedings,” the journalist, whose investigative reporting prevented illegal appropriations of vast extensions of land in Pará, while costing him several physical assaults, told IPS.

“Recurrent legal actions are the most efficient form of censorship,” said Pinto, recognised as an “information hero” by the Paris-based Reporters without Borders.

In his case he did not receive solidarity from business organisations such as the National Association of Newspapers, which granted the 2016 Freedom of the Press award to Gazeta do Povo, reinforcing the general reaction from the journalism sector to the harassment from judges and prosecutors in Paraná.

There have been other “attempts to curtail freedom of the press that in turn help to prevent new cases” with their strong repercussions, Ángela Pimienta, head of the Institute for Journalistic Development that maintains the internet portal Press Observatory, told IPS.