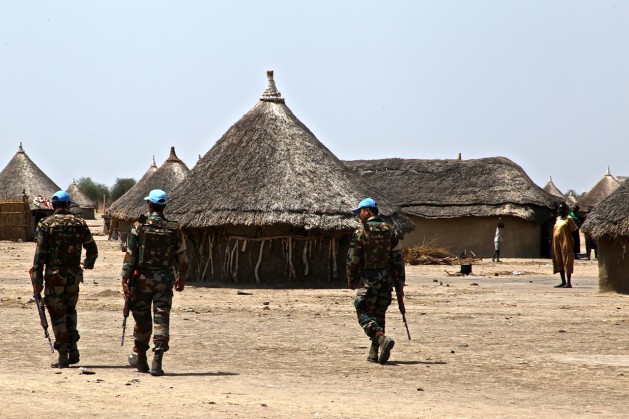 UNITED NATIONS, Oct 11 2016 (IPS) - UN peacekeepers were reportedly unable and, at times, unwilling to respond effectively to violent clashes in Juba, South Sudan in July 2016 according to a new report by the Center for Civilians in Conflict (CIVIC).

The report details how the UN Mission in South Sudan (UNMISS) failed to protect civilians during the outbreak of violence, between government and opposition forces.

UNMISS forces were generally unwilling to protect civilians because they were “out-manned and out-gunned and found themselves having to fight against the South Sudanese military while faced with so much obstruction from the government,” Matt Wells, CIVIC’s Senior Advisor for Africa and Peacekeeping told IPS.

“(In) such dangerous situations, a lack of adequate medical care makes the peacekeepers less proactive in pushing out and protecting civilians, “ said Wells.

About 37,000 Internally Displaced Persons (IDPs) live in two major camps, known as Protection of Civilians (POC) sites, in Juba. From 8 to 11 July 8, heavy fighting occurred near the two camps – posing a major threat to civilians both inside and outside the camps. Several rounds of gunfire were fired into the camps, according to the report:

“Even given the difficult environment, UNMISS clearly underperformed in fulfilling core parts of its mandate, including the protection of civilians both inside and outside the POC sites.”

UNMISS were “out-manned and out-gunned and found themselves having to fight against the South Sudanese military while faced with so much obstruction from the government.” -- Matt Wells, CIVIC.

UNMISS was unable to protect civilians largely because its movements and functioning have been obstructed by the South Sudanese government. However, poor contingency planning and insufficient training prior to the crisis meant that UNMISS was “ill-prepared to respond to threats against civilians”.

As a result, when the fighting intensified, “peacekeepers responsible for protecting the POC sites performed unevenly and were confused regarding the missions mandate to protect civilians,” said the report.

The peacekeepers reactions were similar to those in a previous attack on a POC camp in Juba, in February 2016, where some peacekeepers abandoned their posts along the camp’s perimeter, refused to follow orders, did not understand or were unwilling to follow the mandate – according to a UN investigation into the February crisis.

The UN investigation results were released in August, a month after the July crisis, says the CIVIC report. Therefore, no necessary changes were made after the February attack and UNMISS remained vulnerable.

The CIVIC report details how a series of events in July led to a breakdown in the UNMISS chain of command.

During the July fighting, six Chinese peacekeepers were injured after a rocket-propelled grenade exploded next to their armed vehicle. Two of them died of their injuries because of lack of adequate medical care.

Consequently, other Chinese peacekeepers completely abandoned their posts, says the report. The camp gates were left open and unguarded.

“While fleeing, some peacekeepers left behind weapons and ammunition that were temporarily taken by IDP youth.”

Some Ethiopian peacekeepers in one of the POC camps remained at their posts, helped evacuate casualties, gave safety instructions on how to take cover from crossfire and occasionally fired back at the soldiers. Rwandan peacekeepers assisted in providing initial humanitarian assistance such a medical care, water and shelter- according to the report.

An estimated 5000 civilians fled over fences and barbed wire into the main UN base. UNMISS forces allegedly “fired tear gas on the civilians with little or no warning.”

UNMISS was unable to, and in several cases unwilling to, protect civilians outside the camps after the crisis unfolded.

For example, on 11 July, UNMISS received information about an ongoing attack in a compound in Juba. Although orders were given to respond, “the Ethiopian and Chinese peacekeepers refused to go…and were unwilling to try to intervene.” About 100 SPLA government soldiers allegedly gang-raped at least 5 international aid workers, assaulted at least a dozen others and executed a South Sudanese journalist allegedly based on his Nuer ethnicity.

UNMISS was likewise unwilling to protect critical storage warehouses or provide escorts for water trucks and ambulances. As a result, SPLA soldiers looted $30 million dollars’ worth of goods including 4,500 tons of food, enough food to feed about 220,000 people for a month from one warehouse alone.

The threat against civilians continued without an effective response by UNMISS even after a ceasefire was declared on 11 July.

In the immediate aftermath of the crisis, women and girls experienced high levels of widespread sexual violence when they left the sites to look for food for their families, according to many reports.

“There was a logic that it is better to die outside the camp or go out and be raped than to die inside…The hunger was visible,” said a senior UNMISS official, in the CIVIC report.

UNMISS was slow to respond to sexual violence outside the camps. Both vehicle and foot patrols were of poor quality because peacekeepers were “reluctant to put themselves in harm’s way particularly given the mission’s medical care problems.”

Many peacekeepers were also unwilling to patrol in unarmed vehicles. The SPLA had restricted the use of armed vehicles in certain areas.

Additionally, a lack of communication between UNMISS and the camps’ communities undermined effective patrolling.

CIVIC’s Africa and Peacekeeping Program Officer, Lauren Spink, told IPS that “many women in the camps did not know the patrol times or patrol areas and this limits the ability of the patrols to be an effective protection mechanism.”

However, in one incident, according to the report, SPLA soldiers abducted a woman in front of both an armed Nepalese Police Unit post and a Chinese military peacekeeping post in one of the camps. “Neither group tried to intervene despite being aware that the abduction was taking place.” Neither group was on patrol.

The CIVIC report called for the South Sudanese government to “cease obstruction of UNMISS activities and movements” and for UNMISS to investigate and report underperformance in protecting civilians.

Further, the report emphasizes the need for an immediate arms embargo on South Sudan to “limit the use of weapons against civilians and to respond to the government’s continued obstruction.”

“The UN failings began before guns were fired in July and the Security Council has not taken meaningful action.”

The UN Security Council’s 15 members remain divided over the arms embargo and have therefore not acted on this option.

“What we would like to see is less condemnation and more action,” said Wells to IPS, referring to the tendency for Security Council statements to condemn violence without concrete responses.

Farhan Haq, UN Deputy Spokesman for the Secretary-General told reporters on 6 October that the UN is waiting for the release of its own report on the Juba violence, which, he said, is expected to be finalised soon.

“A decision was taken to replace commanders in a unit following the crisis,” said Haq, noting that “in the current context of South Sudan, where the UN Mission in South Sudan is overstretched, it was decided not to replace an entire unit without immediate replacement and leave the protection of civilian site with even less resources to be protected.”