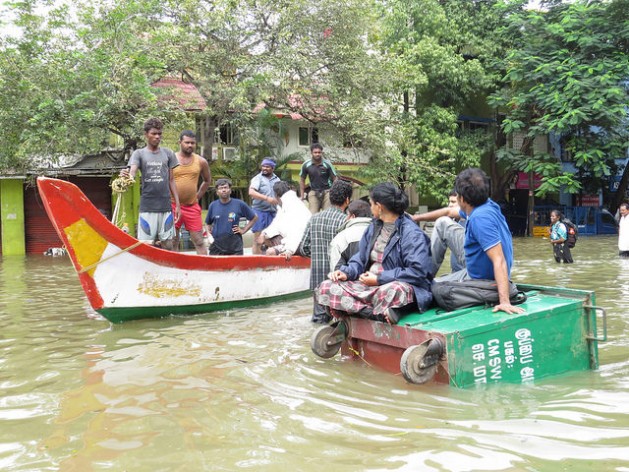 A couple wait on an overturned garbage bin to be rescued by boat during the Chennai flooding of December 2015. Credit: R. Samuel/IPS

CHENNAI, India, Oct 19 2016 (IPS) - “The rain was our nemesis as well as our saviour,” says Kanniappan, recalling the first week of December 2015 when Chennai was flooded.

“Kind neighbours let us stay in the upper floors of their houses as the water levels rose. The rainwater was also our only source of drinking water,” he added.

“Urban planners value land, not water.” -- Sushmita Sengupta of the Centre for Science and Environment

Kalavathy, another resident, isn’t very familiar with the links between extreme weather events and climate change. All she knows is that in December, her house was completely submerged in 15 feet of water. Now, after working night shifts, she gets up at 4am to pump water, supplied by the administration during fixed timings.

The simple lives of Kalavathy and her neighbours, who live in row houses behind the 15-foot-high wall built on the embankment of Adyar River, seem to revolve around water. Either too much or too little.

Chennai, the capital city of the southern Indian state of Tamil Nadu, literally became an island in December 2015. The airport was inundated. Trains and flights had to be cancelled, cutting off the city for a few days from the rest of India.

The Chennai floods claimed more than 500 lives and economic losses were pegged at 7.4 billion dollars, with similar figures for all flood-affected Indian cities.

Urban flooding in India and other countries is one of the issues being discussed at the Habitat III meeting in Quito, Ecuador this week. The Indian government has also released a draft for indicators of what a “Smart City” would look like.

While the extreme rainfall that Chennai experienced was attributed to El Nino, scientists predict that with climate change, extreme weather events will increase. “There will be more rain spread over fewer days, as happened in Chennai in 2015, Kashmir in 2014, Uttarakhand in 2013,” says Sushmita Sengupta of the Centre for Science and Environment (CSE), a Delhi-based research and advocacy organisation. This concurs with the IPCC fifth assessment report that predicts that India’s rainfall intensity will increase.

According to India’s National Institute of Disaster Management, floods are the most recurrent of all disasters, affecting large numbers of people and areas. The Ministry of Home Affairs has identified 23 of the 35 Indian states as flood-prone. It was only after the Mumbai floods of 2005 that the National Disaster Management Authority (NDMA), a government body, distinguished urban floods as different from riverine floods. The cause of each is different and hence each needs a different control strategy.

The Chennai city administration was ill-prepared to cope with the freak weather, in spite of forecast warnings from Indian Meteorological Department. Jammu & Kashmir had neither a system for forecasting floods nor an exclusive department for disaster management when it was hit by floods in 2014. While a different reason can be attributed for the flooding and its aftermath for each of the Indian cities, the common thread that connects  them is extremely poor urban planning.

As per a report by Bengaluru-based Indian Institute for Human Settlements (IIHS), in 1951, there were only five Indian cities with a population of more than one million. In 2011, this number rose to 53. To cater to the increasing population, the built-up area increased, roads were paved and open spaces dwindled.

But an IIHS analysis shows that the built-up area has been increasing disproportionately compared to population growth. Between 2000 and 2010, Kolkata’s population grew by about 7 percent, but its built area by 48 percent. In the same period, Bengaluru’s built area doubled compared to its population, indicating the commercial infrastructural development.

The open spaces that disappeared, giving way to concrete structures, are primarily water bodies that act as sponges, soaking up the rainwater. Increasing population also led to increased waste and the cities’ water bodies turned into dumping grounds for municipal solid waste, as was the case with Chennai’s Pallikaranai marshland. They also became sewage carriers like the River Bharalu that flows through Guwahati, Assam.

A 1909 map of Chennai shows a four-mile-long lake in the centre of the city. It exists now only in street names such as Tank Bund Road and Tank View Road. T.K. Ramkumar, a member of the Expert Committee on Pallikaranai appointed by the Madras High Court, told IPS that in the 1970s, the government filled up lakes within the city and developed housing plots under ‘eri schemes’, eri in Tamil meaning lakes.

In fact eris are a series of cascading tanks, where water overflowing from a tank flows to the next and so on till the excess water reaches the Bay of Bengal. But the marsh and the feeder channels have been blocked by buildings, leading to frequent floods. NDMA suggests that urbanisation of watersheds causes increased flow of water in natural drains and hence the drains should be periodically widened. Not only are the water courses not widened, but heavily encroached upon.

Encroachment of water bodies is a pan-India problem. The water spread of all its cities have been declining rapidly over the years. “Of the 262 lakes recorded in Bengaluru in the 1960s, only ten have water. 65 of Ahmedabad’s 137 lakes have made way for buildings,” says Chandra Bhushan of CSE. Statistics reveal that the more a city’s water spread loss, the more the number of floods it has experienced.

After the Chennai floods, the government-appointed Parliamentary Standing Committee demanded strict action against encroachments. It directed the Tamil Nadu administration to clear channels and river beds to enable water to flow, to improve drainage networks and to develop vulnerability indices by creating a calamity map. The Committee’s direction applies equally well to all the cities.

The Indian government has allocated 164 million dollars to restore 63 water bodies under its Lakes and Wetlands Conservation Program. But urban flood statistics reveal that the efforts need to be speeded up.

Yet in the Draft Indian Standard for Smart Cities Indicator, there is no indicator to measure the disaster preparedness and resilience of a city.

“Catchment areas and feeder channels should be declared ecologically sensitive and should be protected by stringent laws,” says Sengupta.

As for Chennai, “The retention capacity of Pallikaranai should be enhanced by suitable methods after hydrological and hydrogeological studies says,” said Dr. Indumathi M. Nambi of the Indian Institute of Technology.

She adds that the Buckingham Canal should be connected to the sea to facilitate discharge during floods. Plans are afoot to demonstrate this with the cooperation of industries and NGOs.

The plans are sure to work as Jaipur has created a successful public-private partnership model. Mansagar Lake, which had turned into a repository of sewage, received 70 percent funding from the central government for restoration. The state government raised the balance with the help of the tourism industry by allocating space for entertainment and hospitality spots, successfully restoring the lake.

The restoration of water bodies and flood mitigation measures will need to be site-specific, taking the extent and topographical conditions of catchment area, existing and proposed storm water drains, status of embankments and bunds of water bodies and permeability of soil conditions into account. But with such measures and political will, experts believe the safety of inhabitants and urban resilience can be accomplished.