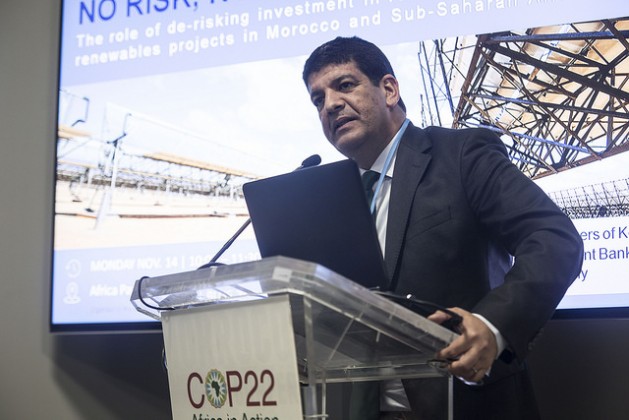 Mustapha Bakkoury, President of the Moroccan Agency for Solar Energy (MASEN), speaking at the COP22 in Marrakesh. Credit: Friday Phiri/IPS

Mustapha Bakkaoury, president of the Moroccan Agency for Solar Energy (MASEN), says his country’s renewable energy revolution would not have been possible if multilateral partners such as the African Development Bank had not come on board to act as guarantors for a massive solar energy project, tipped to be one of a kind in Africa.

The multi-billion-dollar solar power complex, located in the Souss-Massa-Drâa area in Ouarzazate, is expected to produce 580 MW at peak when finished, and is hailed as a model for other African countries to follow.

“Africa has legitimate energy needs, and development of Africa will happen through mobilisation of energy resources,” Bakkaoury told IPS at COP 22 after a roundtable discussion on de-risking investment in realising groundbreaking renewable energy projects.

Bakkauory believes it is possible for Africa to develop its energy sector while respecting the environment. “What we say is that there is no fatality between having energy resources and respect towards the environment, and Africa has abundant resources to do this through its key partner—the African Development Bank,” he said, noting the instrumental role of Africa’s premier multilateral financier to renewable energy in Africa.

And in affirming its continued commitment to universal access to energy for Africa, Alex Rugamba, AfDB Director for Energy, Environment and Climate Change, told IPS that “the Bank’s commitment has shifted gear as it has now a fully-fledged vice presidency dedicated to Power, Energy, Climate and Green Growth.”

Rugamba added that the Bank has learnt valuable lessons from various initiatives it is already supporting, and knows what is required to move forward with the initiatives without many challenges.

“Private sector cannot be ignored because the money they have is more than what is available under public financing,” she says.

But the risk is believed to be too high for private investors to off-load their money into Africa’s renewables, a relatively new investment portfolio with a lot of uncertainties. German Parliament State Secretary Thomas Silberhorn says the highest risk in Africa is politically related.

“It’s not about economic risks alone, but also political risks,” said Silberhorn. “You don’t need to convince German investors about solar energy because they already know that it works, what they need is reliability on the political environment and sustainability of their investments.”

Silberhorn, who gave an example of a multi-million-dollar project in Kenya currently on hold due to political interference, added that ways to reduce political risks should be devised for Africa to benefit from private sector investments in renewables.

But even as risk factors abound, World Bank’s Tuck believes there is hope for Africa, citing Zambia, where record cheap solar energy has been recorded.

“Through a competitive bidding process, we have in Zambia under the Bank’s ‘Scaling Solar’ program, recorded the cheapest price at 6.02 cents per KWh,” she said, heralding it as a model to follow in de-risking climate investments for Africa’s growth.

And in keeping with the objective of universal energy for all, experts note the need to ensure that the end users are not exploited at the expense of investors.

“While the state should not interfere in this business model to work, modalities have to be put in place to ensure that the people for which energy is needed, afford it, otherwise, the project becomes useless,” said MASEN’s Bakkaoury.

Following up on this key aspect and responding to the political risk question, Simon Ngure of KenGen Kenya proposes a key principle to minimise political interference—involvement of the local communities.

“If you involve the local communities from the onset, regardless of whether governments change, the projects succeed because the people will have seen the benefits already,” said Ngure, who also noted policy restructuring as another key component to de-risk climate investments.

Agreed that de-risking investment is a crucial component, small grants are another issue that the African Union Commission’s implementing Agency, the New Partnership for Africa’s Development (NEPAD), believes could unlock the continent’s challenge of access to climate financing.

NEPAD Director of Programmes Estherine Fotabong told IPS that it was for this reason that the agency established the NEPAD Climate Change Fund to strengthen the resilience of African countries by building national, sub-regional and continental capacity.