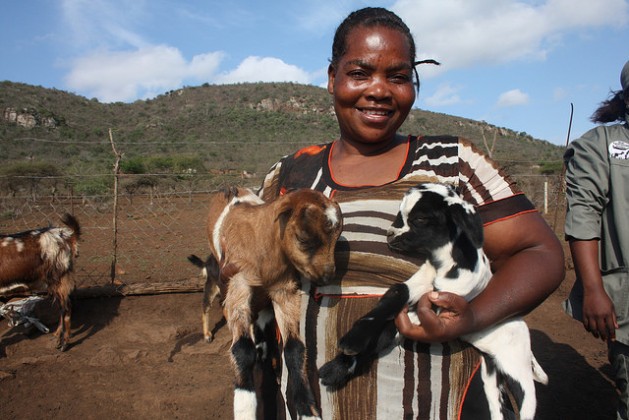 In money value, the drought deprived Ndimande of more than 21,000 dollars. Each goat would be worth an average of 714 dollars if they had survived in the dry, hot and rocky environment in her village of Ncunjana in the KwaZulu Natal Province, which has been stalked by a drought that swept across Southern Africa.

Goats are much better at dealing with drought, vulnerability and a changing environment than cattle. They're also easier for women to herd.

More than 40 million people are in need of food following one of the worst droughts ever in the region, with the Southern African Development Community launching a 2.8-billion-dollar emergency aid appeal.

Smallholder farmers in South Africa’s KwaZulu Natal Province have shifted to goat production to adapt to climate change. Their fortitude could be a success story for African agriculture in need of transformation to produce more food to feed more people but with fewer resources.

Livestock farmers like Ndimande are making good of a bad situation. They need help to cope with worsening extreme weather events which have led to increased food, nutrition and income security in many parts of Africa.

Adapting agriculture to climate change and climate financing are pressing issues at the seminal 22nd meeting of the Conference of Parties (COP 22) which opened this week in the Moroccan city of Marrakesh. Morocco – already setting the pace in implementing the global deal to fight climate change through innovative projects – has unveiled the Adaptation of African Agriculture (AAA), a 30-billion-dollar initiative to transform and adapt African agriculture.

The transformation of the agricultural sectors in addressing climate change is essential to tackling hunger and poverty, José Graziano da Silva, director-general of the Food and Agriculture Organization (FAO) of the United Nations, said in a message in the run-up to the COP 22 following the entry into force of the Paris Agreement on Nov. 4. Agricultural sectors are uniquely positioned to drive sustainable development through climate-smart sustainable agriculture approaches, da Silva emphasised.

Almost all African countries have included agriculture in their climate action plans, known as Nationally Determined Contributions (NDCs), highlighting the grave risk that climate change poses both to food security and economic growth on the continent, said Bruce Campbell, director of the CGIAR research programme on Climate Change, Agriculture and Food Security (CCAFS).

Science, innovation and technology will be at the core of adaption in African agriculture, he said.

According to the African Development Bank, 315 to 400 billion dollars will be needed in the next decade to implement the continent’s agricultural transformation agenda.

Harnessing technology is one of many solutions in addressing the impacts of climate change if smallholder farmers are to sustainably produce food, while rearing livestock. The Technical Centre for Agricultural and Rural Cooperation (CTA) – which has launched a regional project to improve farmer’s access to technologies to lift them out of hunger and poverty – has identified diversifying livestock-based livelihoods as one of four proven solutions that cereal and livestock farmers in Southern Africa can adopt to transit to climate-resilient agriculture.

Swapping cattle for goats has allowed Ndimande to grow her flock from 30 goats three years ago to 57 goats and 15 kids. Last year, she sold six goats at an average price of 67 dollars each and invested the proceeds in a new three-bedroom tile and brick house.

Ndimande is one of several farmers in KwaZulu Natal Province who, through training in goat management under a collaborative agribusiness and Community Animal Health Worker project, are helping transform livestock farming.

In addition, the project seeks to create 270 micro-businesses and generate 7.1 million dollars in revenue within five years.

“Goats have given me food and income because I am able to sell them within a short space of time unlike cattle,” Ndimande told IPS, explaining that better livestock management skills have improved her flock.

Goats are much better at dealing with drought, vulnerability and a changing environment than cattle. They’re also easier for women to herd, said Rauri Alcock, a director of the Mdukatshani Rural Development Project.

“Women are our priority attention because they are in charge in many households and are the vulnerable people we are trying to get to, so goats, women, global warming come together very well,” Alcock told IPS during a tour of agribusiness project organised jointly by CTA and the Southern Africa Confederation of Agriculture Unions (SACAU) for livestock farmers from across Southern Africa.

Alcock explains that Mdukatshani Rural Development Project’s main entry point has been helping farmers avoiding kids’ deaths in their flocks. Despite being productive, the high mortality of kids at weaning lowers productivity for a farmer to be able to start selling their goats.

“Goats are an adaptation strategy as we talk about climate change. We see that male farmers who have had cattle and lost them are now moving towards keeping goats because goats are actually more resilient and better animals for a harsh changing environment,” said Alcock.

Another farmer, Sikhumbuzo Ndawonde (46), a former steel factory worker in Johannesburg until he was retrenched, has supported his family through keeping goats even though he does not eat them.

“I never eat any goat meat but I love keeping them because I get good income from them besides being able to have a goat for traditional ceremonies. They are now my job,” said Ndawonde, who has a flock of 33 goats and sells at least 10 goats each year.

Climate change has winder implications for livestock keepers in Southern Africa but with management, this is a route to sustainable livelihoods, says Sikhalazo Dube, a livestock specialist and the Southern Africa regional Representative for the International Livestock Research Institute (ILRI).

“One of the challenges caused by elevated levels of carbon in the atmosphere is increase in the woody component of the vegetation. Goats as largely browsers are best suited to reduce bush encroachment and in the process benefit nutritionally,” said Dube, adding that in declining feed availability due to drought, keeping goats is ideal.

Small stock can be produced in small areas and require less feed, making them ideal for women and youth who are often landless or not supported to own land to use as an entry point for income generation and Small Medium Scale Enterprises, Dube said.