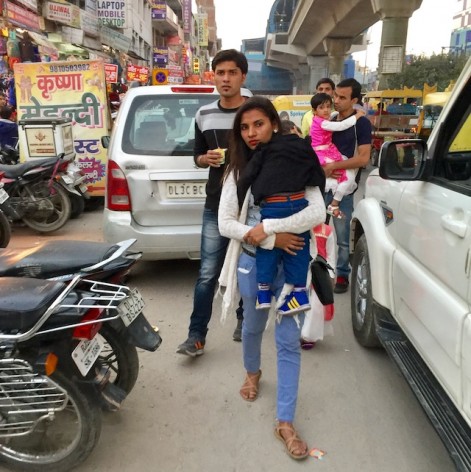 A family in New Delhi. Given India's high infant mortality rate, one of the highest in the world, many women are not keen on sterilisation since they feel that it shuts out their option of having children later if required. Credit: Neeta Lal/IPS

NEW DELHI, Nov 29 2016 (IPS) - The Indian government’s decision to make injectable contraceptives available to the public for free under the national family planning programme (FPP) has stirred debate about women’s choices in the world’s largest democracy and second most populous country.

The controversial contraceptive containing the drug Depot Medroxyprogesterone Acetate (DPMA) is currently being introduced at the primary and district level. It is delivered in the form of an injection and works by thickening the mucous in a woman’s cervix which stops sperm from reaching the egg, thereby preventing pregnancy. It is also much cheaper than other forms of contraceptives available across the country.

Injectables have been part of family planning programs in many countries for the last two decades. They have also been available in the private sector in India since the early 1990s though not through government outlets. Advocates of injectable contraceptives say that their inclusion in the government’s programme will now offer women more autonomy and choice while simultaneously whittling down the country’s disquieting maternal mortality rate (MMR).

Nearly five women die every hour in India from medical complications developed during childbirth, according to the World Health Organization (WHO). Nearly 45,000 mothers die due to causes related to childbirth every year in India, which accounts for 17 percent of such deaths globally, according to the global health body. The use of injectable contraceptives is also backed by the WHO, which has considered the overall quality of the drug with evidence along with the benefits of preventing unintended pregnancy.

However, Indian civil society seems splintered on the issue. Several bodies like the Population Foundation of India and Family Planning Association of India support the government’s move. The Federation of Obstetric and Gynaecological Societies of India (FOGSI), an apex body of gynaecologists and obstetrics in the country, is also supportive of their use based on scientific evidence.

However, women right activists have opposed the initiative as a part of the national programme. They point to a report by the country’s premier pharmaceutical body — Drugs Technical Advisory Board (DTAB) — which has noted that DPMA causes bone loss. The report emphasizes that the osteoporotic effects of the injection worsen the longer the drug is administered and may remain long after the injections are stopped, and may even be irreversible. The DTAB had advised that the drug should not be included in the FPP until discussed threadbare with the country’s leading gynaecologists.

Several health groups, women’s organizations and peoples’ networks have also issued a joint statement protesting the approval of the injectable contraceptive. As far back as 1986, Indian women’s groups had approached the Supreme Court regarding serious problems with injectable contraceptives. based on a study by the country’s premier medical research organization — the Indian Council of Medical Research

Advocates of women’s health and reproductive rights add that the contraceptive is harmful to women as it leads to menstrual irregularity, amenorrhea, and demineralization of bones as a result of its long term use. Users have also reported weight gain, headaches, dizziness, abdominal bloating as well as decreased sex drive, and loss of bone density. The latest evidence from Africa now shows that the risk of acquiring HIV infection enhances because the couple is less likely to use a condom or any other form of contraception to minimise infection.

However, experts iterate that the real issue isn’t just about women’s health but about a human rights-based approach to family planning.

“Why should we control women’s access to choice? Is it not time to re-examine the issue and initiate a fresh debate?’’ asks Poonam Muttreja, Executive Director of the Population Foundation of India, who has opposed the introduction of DMPA.

Others say that while they are all for enlarging the basket of choices for women, and empowering them, pushing invasive hormone-based technology upon them is hardly the way to go about it. Besides, with the incidents of arthritis and Vitamin D deficiency in India already worrisome, demineralization of bones caused by DPMA will make matters a lot worse.

The total Contraceptive Prevalence Rate (CPR) in India among married women is estimated at 54.8 percent with 48.2 percent women using modern methods. This is comparatively lower than neighbouring countries like Bhutan, Bangladesh and Sri Lanka whose CPR stands at 65.6 percent, 61.2 percent and 68.4 percent, respectively.

In India, the primary method of family planning is female sterilization – at 65.7 percent, which is among the highest in the world. One of the key reasons for this is the limited availability of a wide range of contraceptive methods in the public health sector in the country, say family planning experts. Some fear that the new method might also result in poor women being used as guinea pigs for public healthcare.

“Women’s reproductive health has always been contentious and has had a fraught history, plagued by issues of ethics, consent, and the entrenched vested interests of global pharma companies and developed nations,” says Mukta Prabha, a volunteer with Women Power Connect, a pan-India women’s rights organization. “So we need to tread with caution on DPMA so that women can make informed choices and their health isn’t compromised.”

Indian women suffer from a host of problems associated with unwanted pregnancies from unsafe abortions to maternal mortality and life-long morbidity. The paucity of trained medical personnel in the public health system adds to their woes.. Besides, India has always had a troubled history of sterilisation. In 2014, over a dozen women died as the result of contaminated equipment in a sterilisation camp in the central Indian state of Chhattisgarh.

The resulting media uproar pressured the government to re-examine its policies and its long-held dependence on sterilisation. But in 2015-16 again there were 110 deaths due to botched sterilisation procedures. Given the high infant mortality rate, many women are wary of sterilisation. They also feel it restricts their choice of having children later if required. Despite this, over 1.4 m Indian women were sterilised in 2014 as against 5,004 men.

Worse, the controversial DPMA — which is aimed only at women — isn’t gender sensitive either. What should be pushed instead, say women activists, is male sterilisation which is a far simpler and minimally invasive procedure which also minimizes health risks for women.

As Prabha puts it, “Indian men’s participation in family planning has always been dismal even though they’re the ones who determine the number of children a women has. The current debate is a good opportunity to involve the men in the exercise and set right the gender skew.”