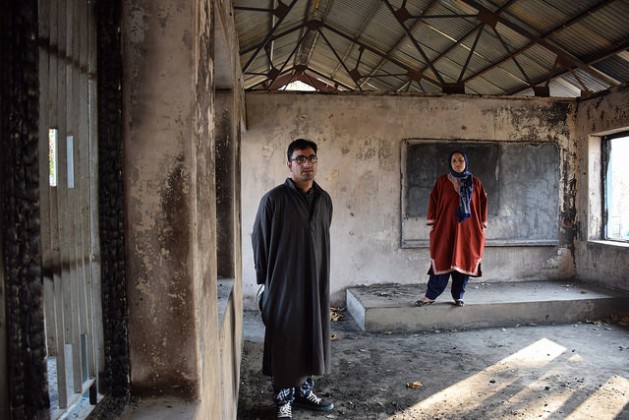 Shugufta Barkat, a former teacher, and her brother Rasikh Barkat, a former student, stand in the charred remains of the Nasirabad Government High School in Kulgam – one of the many schools in India’s Kashmir that have been recently burnt down. Credit: Stella Paul/IPS

KULGAM, Kashmir, India, Nov 23 2016 (IPS) - In the fading light of a November afternoon, 12-year-old Mariya Sareer bends over a textbook, trying to read as much as she can before it gets dark. It’s been nearly five months since the seventh grader from Shurat, a village 70 kms south of Srinagar city, last went to school, thanks to a raging political conflict.

“Studying like this is hard. I don’t know where to focus. My scores won’t be as good as before,” says the young student, who has always been top of her class. Her siblings Arjumand, 9, and Fazl, 6, both students at the same school, nod in agreement.

Unlike other terror attacks, the arsons have remained a mystery, with no one claiming responsibility.

Mariya is still luckier than many of her friends. Although her school – the Taleem-Ul-Islam Ahmadiyya Institute – has been closed for the past four and half months, the building is still standing. But for thousands of others, there will be no classrooms to return to when the shutdown ends because their schools have been destroyed in fires.

Burning down a generation’s future

Schools across Kashmir were closed for Eid ul Fitr, which was celebrated on July 6. They were expected to reopen soon after the festival. But violence erupted across the valley after Burhan Wani, a young militant, was gunned down by security forces on July 8. Amidst mass rallies, stone-throwing and renewed demands for “freedom” from India, the pro-separatist parties called for a total shutdown of the valley.

The shutdown effectively kept the valley’s 1.4 million students from returning to their classrooms.

A few weeks later, on Sep. 6, the first news of a school fire was reported in Mirhama village of Kulgam district. Soon, similar reports began to pour in from all over the valley. So far, nearly three dozen schools – both government-run and privately-owned – have been burnt down. A majority of these schools are in South Kashmir where Burhan Wani was killed.

One of them is the Nasirabad Government High School in Kulgam. The building was set on fire on the evening of Oct. 16 and although locals and police tried to douse the flames, the library, gymnasium, computers, laboratory and desks were destroyed. Locals allege that the arsonists wanted to prevent the school from reopening – a reason why they burnt the upper floor, instead of the ground floors that had little equipment.

Shugufta Barkat, a former teacher at the school, says it was among the best in the district. “They are burning down the children’s future,” a visibly shaken Barkat told IPS. Mariya, Arjumand and Fazl Sareer, students from the village of Shurat in India’s Kashmir valley, study at their home. Educational institutions have been closed for four and half months due to political unrest in the state. Credit: Stella Paul/IPS

Surprisingly, unlike other terror attacks, the arsons have remained a mystery, with no one claiming responsibility. Separatists and the government have both blamed each other, while some locals say they are the work of “fringe elements” in society who just want to cause disruptions. The police have made some arrests, but in each case, the accused has been identified as a “pro-separatist” without any clear link with any terror group.

With the increased cases of arson, the government has asked teachers to protect their schools during the nighttime hours. Accordingly, schools have created charts of teachers on “night duty”. Female teachers have been asked to send a male relative to patrol on their behalf.

Unease in a minority community

Basharat Ahmed Dar is the head of Asnoor, a village of the minority Ahmadiyya Muslim community in Kulgam. In a state of long political turmoil, violence, murders and torture, this is a community campaigning for love, peace and harmony. Their unique principles have earned them global respect, as well as scorn from many, especially the radicals.

The community strongly advocates for education as a healthy path to progress and also runs five schools in South Kashmir. The schools – which admit both Ahmadiyya and non-Ahmadiyya students – are known for a high standard of education and superior infrastructure.

Since the shutdown began, the Ahmadiyya youths, including some of the teachers, have been guarding their schools to repel possible attacks and arson. The patrolling will continue until the snow begins to fall, says Dar.

“It has not rained here for several months, so everything is very dry and prone to catching fire. But once snowfall begins, setting fire will not be as easy,” he explained.

In Kashmir, a study year begins in April and ends in November- just before the three-month long winter vacation begins. The annual examinations are held in late October. However, this year, none of the schools could conduct the final examinations. With no signs of an end to the shutdown, government this week declared a mass promotion for students from first to ninth grade across the valley.

Private schools have decided to conduct examinations, even though they had completed only about 40 percent of the syllabus.

“In 2014 also, after a flood hit the valley, the students had a mass promotion although only two to three percent of all schools were affected. In future, we will definitely see a vacuum of knowledge and skills in the state’s labour force,” he warned.

High school students are also not pleased with the government decision. Ishfaq Ahmed, an eleventh grade student in Kulgam, says, “I had joined a coaching institute to prepare for the engineering college entrance test next year. But because of the shutdown, all the coaching institutes are closed. Unless those are allowed to function, nothing else is going to help.”

Meanwhile, Mariya Sareer is praying for an end to the shutdown and the burning of schools so she can get her life back. “I just want to return to school, study and play cricket,” she says.