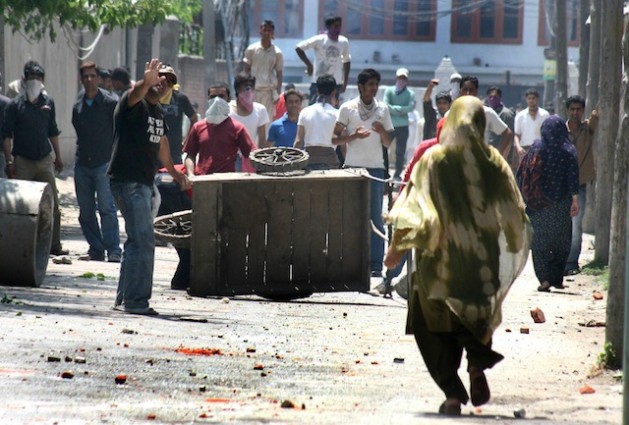 Protests against human rights violations have been a hallmark of the armed conflict in Kashmir. Credit: Athar Parvaiz/IPS

SRINAGAR, Dec 15 2012 (IPS) - Amid growing scepticism among Kashmiri people that the separatist leadership has lost relevance in the region’s fast-changing political landscape, the All Parties Hurriyat (Freedom) Conference – an alliance of separatist political parties and religious and social groups – is making a Herculean effort to reclaim some relevance in this disputed region.

Kashmir, the northwestern most region of South Asia, has long been the site of a territorial dispute between India and Pakistan.

Ever since the partition of India in 1947, Pakistan has held control over one-third of Kashmir’s territory, while India administers the remaining two-thirds, including the Kashmir valley.

In the six decades since Indian independence, the two South Asian neighbours have fought three wars over Kashmir, but neither one has ever been able to claim complete control over the territory or its people.

Formed as a political front in 1993 with the goal of realising Kashmir’s right to self-determination, guaranteed by United Nations Security Council Resolution 47, Hurriyat was once the voice of Kashmir’s resistance movement, encompassing members from the Jammu and Kashmir Liberation Front (JKLF), Jamaat-e-Islami, the Awami Action Committee, the Peoples Conference, the Jammu and Kashmir People’s League (JKPL), the People’s Democratic Front and the Islamic Students League.

But the inability to resolve some of Kashmir’s most basic political questions resulted in the Conference being edged out of its central spot in the political sphere, replaced by more mainstream parties.

A delegation representing the Hurriyat Conference, led by its chairman, Mirwaiz Umar Farooq, is in Islamabad today for talks with the Pakistani government, which has supported Kashmir’s freedom struggle since its inception in 1989.

India, in turn, has accused Pakistan of supplying arms to Kashmiri freedom fighters.

Throughout decades of talks and failed negotiations, Pakistan has pushed to resolve the territorial dispute according to the wishes of the Kashmiri people, while India – which currently has tens of thousands of troops stationed at intervals across Indian administered Kashmir – has fought to maintain the status quo.

Meanwhile, Kashmiris themselves want to be included in the dialogue that has, hitherto, been primarily a bilateral exchange between India and Pakistan. 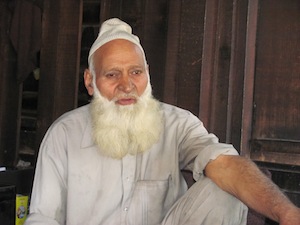 People like Ghulam Rasool Malik, who lost his only son to the conflict, are desperate for the freedom struggle to yield results. Credit: Athar Parvaiz/IPS

“We want to go to Pakistan to resolve the Kashmir issue and make the dialogue a vibrant one, with Kashmir at the top of the agenda for the Indo-Pak talks, along with active participation of Kashmiris,” Farooq said last week in Srinagar, before leaving for the Indian capital, New Delhi, to board a flight bound for Pakistan.

“We will urge Pakistan to (increase) its support for Kashmiris so that India will feel pressure to initiate a meaningful dialogue for the solution of this issue.”

Analysts say that Hurriyat’s visit will not yield much for the coalition, nor even for the overall political situation in Kashmir.

Commenting on Hurriyat’s visit, Reyaz Wani, a leading Srinagar-based political commentator, told IPS, “The visit is taking place at a time when Pakistan is preparing for national polls next year. And at the same time there has been little headway in the ongoing talks between India and Pakistan to warrant consultations with Kashmiri leadership.”

According to Wani, Hurriyat’s demand that it be given “legal sanctity” for its third party role in the resolution efforts is, simultaneously, well past its time and ahead of its time.

“It is past its time as Hurriyat has lost its political centrality in Kashmir, being reduced to a spectator to the fast-changing political (landscape). And it is ahead of its time because India and Pakistan seem to have moved away from tackling their political issues, towards nurturing a long-term trading relationship.”

Recently, Pakistan has shown eagerness to build trade relations with India and is on the brink of granting India the long-awaited Most Favoured Nation (MFN) status by the end of December.

“Besides,” Wani added, “not only has the separatist leadership itself splintered into different groups but the two-thirds of the political space it once dominated has been appropriated by the mainstream parties (such as the pro-Indian National Conference and the Peoples Democratic Party),” who not only have electoral sway but also occupy a substantial space in the minds of most Kashmiri people, he said.

Still, the visit will undoubtedly bring Hurriyat, which has long been stagnating on the margins of Kashmiri politics, back into the mainstream discourse.

“The meetings with Pakistani leaders and those from Pakistan Administered Kashmir will allow Hurriyat to bask in some media attention. Hurriyat will also get a chance to be active on a larger plane, playing the role of the de facto third party without being acknowledged as such by New Delhi,” Wani said.

According to Shamas Imran, a professor at Kashmir’s Central University, the visit “provides a good opportunity” for Hurriyat to pluck itself and the Kashmir issue from obscurity.

“The recent successful elections for grassroots-level government (village heads and Panchayat members for local governance) and the growing influence of mainstream politics is presently the most worrying situation for the pro-freedom political parties,” Imran told IPS, referring to the fact that the average Kashmiri and most of civil society have grown sceptical about Hurriyat’s role.

Addressing Hurriyat leaders during one of their seminars last Thursday, Siraj Ahmad, general secretary of Kashmir’s Economic Alliance, pointed out, “You have to bear in mind that people do come out in large numbers to cast their votes during polls held by the Election Commission of India, despite your boycott calls.”

“The movement for seeking the resolution of the Kashmir issue should not be confined to giving sermons and holding deliberations; actions should speak louder than words,” Doctors Association President Dr Nisar-ul-Hassan told participants at the same seminar.