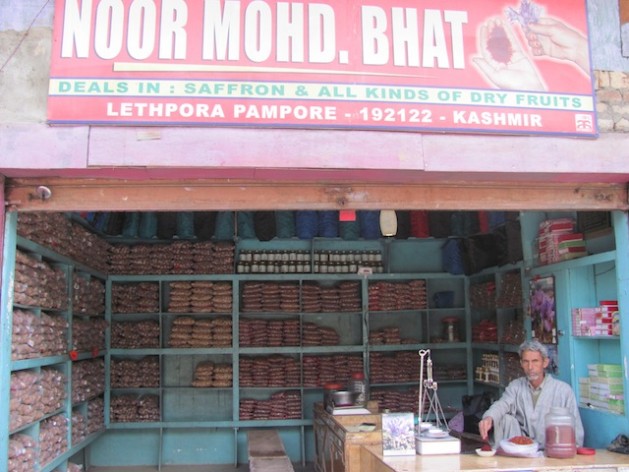 A Kashmiri trader who deals in saffron and almonds. Credit: Athar Parvaiz/IPS

SRINAGAR, Jul 30 2012 (IPS) - As part of recent confidence building measures aimed at minimising tensions between India and Pakistan, which arose largely due to conflicting claims over Kashmir, the two countries have decided to make the Valley an economic bridge, rather than a bone of contention.

But merchants who have long been trading across the Line of Control (LoC), which separates Indian-controlled territory from Pakistan Administered Kashmir (PAK), are fearful that efforts to normalise relations between the two countries will be disastrous for small traders, who will effectively be cut off from the benefits of bilateral trade.

Soon after the inception of a composite dialogue in 2004, initiated after a war crisis in 2001-2002, both states agreed to reopen the Srinagar-Muzaffarabad road in April 2005 to allow families splintered by the LoC to visit each other.

Still, merchants continue to lament the lack of adequate trade-related infrastructure, which they say limit what could otherwise be a highly lucrative flow of goods.

The nuclear neighbours have already fought three full-scale wars over Kashmir while an armed insurgency and counter-insurgency in Indian Kashmir that erupted in 1989 has claimed 47,000 lives to date, according to official estimates.

The insurgency fanned hostility between the two states, but in recent years, especially in the aftermath of the September 11th attacks on the United States, the relationship has been changing.

In October 2008 a series of confidence building measures (CBMs) that included resumption of cross-LoC trade for the first time in over 60 years began to ease restrictions in the flow of agricultural and horticultural products like rice, maize, fresh fruits, vegetables, wooden furniture, medicinal herbs, handicrafts, mattresses, pillows and cushions out of Kashmir. At the close of 2011 trans-LoC trade amounted to roughly 37 million dollars.

But more than three and a half years down the line, cross-LoC traders say they are yet to enjoy basic trade facilities.

“When trade between the two sides was first announced, international media equated it with the falling of Berlin Wall,” Rashid Wani, a trader who uses the barter system to send consignments of wooden handicrafts to PAK in exchange for mattresses, cushions and pillows, told IPS.

“But nothing much happened after that media-hype. Doing trade without basic facilities in the 21st century makes no sense.”

“Our traders can’t even make a phone call to their counterparts in PAK as the government of India is yet to lift the ban on telephonic communication from this side to Pakistan,” Mubeen Shah, president of the Joint Chamber of Commerce and Industries (JCCI), a committee comprised of members from both sides of the LoC, told IPS. “Similarly, we can’t make any transactions through banks.”

“This is the first time since 1965, when India and Pakistan fought the second war, that trade ties seem to be improving between them,” Khursheed Mahajan, professor of commerce at the Kashmir University, told IPS.

Early this year, the two countries decided to phase out the negative-list trade regime, which had previously included thousands of items, and limited the number of restricted products to just 1,200.

The move was a bid to normalise trade relations between the two sides, but it only caused consternation among Kashmiri traders who fear that competition from large-scale industries will threaten cross-LoC trade.

“We have been observing that both the countries are working towards improving bilateral trade, which will have a negative impact on cross-LoC trade,” said Zulfikar Abbassi, former president of the JCCI.

Earlier this month, Abbassi led the traders’ delegation from Pakistan Administered Kashmir to Srinagar for a two-day conference to discuss the two sides’ future trade strategy.

“The principles that are applicable to Indo-Pak trade should be made applicable to cross-LoC trade also. They have developed bilateral trade to the extent that few items are in the negative list now. We hope the same policy is applied to our trade as well,” Abbassi told IPS.

However, early signs indicate that this may not be the case.

“Even among the 16 items that they have declared (legal) for cross-LoC trade, three to four of them, like gabba (woolen mats) and khraw (wooden footwear) have absolutely no demand on our (Pakistan’s) side of the LoC.”

According to Abbassi, the two-decades long conflict in Kashmir has turned the paradise on earth into a hell of extreme poverty. According to the 2011 census, 3.2 million people, 21 percent of the total population of Kashmir, live below the poverty line, while the unemployment rate is a staggering 11 percent.

“So the governments of India and Pakistan need to encourage trans-LoC trade. This would enable Kashmiris to overcome the economic deprivation of decades,” Abbassi said. While no comprehensive research exists, modest estimates say cross-LoC trade could be in the millions of dollars if allowed without restrictions, employing thousands of youth.

Abbassi’s counterparts in Indian Kashmir are equally vehement in their demands.

“The traders from this part of Jammu and Kashmir are not being allowed to visit PAK. There has to be actual trade and it would only happen when the traders of both the parts of the State are allowed to interact and meet each other,” Shah told IPS.

Currently, the entire LoC trade system operates on a barter basis. Since bartering requires physical marketplaces, the entire operation is held hostage by restrictions on freedom of movement.

Only those 10,000 “broken” families, with members on either side of the LoC, manage to barter their goods on a regular basis.

If not for the many hurdles, cross-LoC trade would have created “great economic dividends”, Shah told IPS. “During the 18th century, this route would handle trade worth millions of dollars in present value.”

According to Shah, the trading community in 2008 supported opening cross-LoC trade on the premise that transit trade would eventually be allowed.

“We had hoped that our goods would travel to central Asia, Russia, China, Turkey, Indonesia, Afghanistan, Iran and the Middle East. This would surely have made trade flourish. But nothing of the sort happened,” Shah added.

After the joint conference, traders from both sides of the LoC prepared a list of recommendations for the meeting of the India-Pakistan working group on cross-LoC confidence building measures, held in Islamabad on Jul. 19.

But Kashmiri traders say that they have heard these statements several times, though without any positive action.

“We still hope that something positive emerges. Let us wait and see,” Shah told IPS.