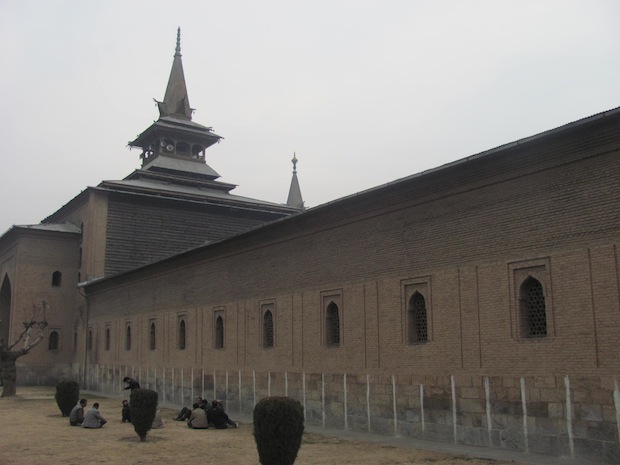 SRINAGAR , Dec 5 2012 (IPS) - Nestled in a valley between the Great Himalayas and the Pir Panjal mountain range, Kashmir is an idyllic and culturally rich region, a cradle of Muslim, Hindu, and Buddhist religious relics and architectural sites.

But a decades-long conflict has overshadowed the region’s heritage and produced a new generation of Kashmiris who are ignorant of the unique history and culture of their land.

A recent survey by the New Delhi-based Indian Trust for Art and Cultural Heritage (INTACH), based on extensive interviews with a sample population of 1,600 people, combined with broad field research, found a significant “cultural disconnect” in 98 percent of the youth polled.

“We are most concerned about the fact that the majority of the respondents were unaware about the rich cultural heritage of Kashmir,” Saleem Beig, who heads INTACH in Jammu and Kashmir, told IPS.

This cultural isolation was evident in the number of youth engaged in any kind of community service (only two percent of respondents), the number of residents seeking to leave their homes in the historic ‘old city’ due to a lack of civic infrastructure (30 percent) and ignorance about the many world-renowned religious and architectural sites in the region – a group of school children who were taken on a ‘heritage tour’ as part of INTACH’s research could only name, at most, two of Kashmir’s heritage sites and were unable to identify places like the Jamia Masjid and the Hazratbal shrine.

According to Beig, the respondents had very little knowledge about the significance of the River Jhelum, the largest river in Kashmir. A historically significant area of the River Jhelum, which served as the tax collection centre for goods ferried into the region. Credit: Athar Parvaiz/IPS

“River Jhelum has tremendous economic, cultural and religious significance. Until very recently it used to be the only means of transporting goods and it has religious significance for Kashmiri non-Muslims (Kashmiri Pandits). But for most of the respondents, it was just a river flowing nearby,” Beig added.

And despite widespread international awareness about increasing pollution levels in the Jhelum, 70 percent of the residents who live on its banks said they had not noticed “any change” in the water body.

“A majority of the respondents could not even describe what cultural heritage was and felt that they should be educated about it by the media and local government,” according to the survey, which also found that 91 percent of inhabitants view cultural heritage as the practice of traditional crafts like carpet weaving, shawl making, papier mâché, embroidery and woodcarving.

Experts like Bashir Ahmad Dabla, a leading sociologist and professor at Kashmir University, have blamed this worrying trend on the ravages of conflict, which has its roots in the 1947 partition of India.

As India concretised its independence from the British Raj, the Muslim-dominated areas of Kashmir were absorbed by the newly established state of Pakistan.

Meanwhile a United Nations resolution gave the remaining population the option of either joining Hindu-dominated India, Muslim-majority Pakistan or becoming independent – but Kashmiris have never been allowed to exercise the third option.

As a result, Pakistan took control over about a third of modern Kashmir, leaving the rest to Indian military and political administration.

Generations of Kashmiris have challenged this arrangement and demanded independence from both countries. A ‘pro-freedom’ uprising in 1989 signalled the beginning of an armed insurgency that continues to simmer today.

Government agencies and a host of non-governmental organisations that have monitored the situation closely over the years have put the death toll of the conflict at well over 50,000.

The struggle for freedom has usurped interest or the ability to participate in cultural and social life. Between 1989 and 2004, young people between the ages of 20 and 35 flocked to the resistance movement, taking up arms in lieu of pursuing higher education, professional development or any kind of hobbies or social activity.

Data from the INTACH survey estimates that 98 percent of youth over the age of 18 have no involvement in any kind of formal sporting activity.

A dearth of cultural education in the school system has compounded the problem, given that the first casualties of the armed insurrection were basic government sectors like health and education. Tagore Hall, the nerve-centre of cultural activities in Kashmir, was recently renovated after being destroyed by a bomb blast in 1990. Credit: Athar Parvaiz/IPS

In the early days of the resistance movement, militants bombed Tagore Hall, the nerve-centre of cultural activities in the region, to send the message that the population should not participate in cultural activities, as they were considered ‘un-Islamic’.

“The heavy impact of conflict and insecurity crushed normal life. So education of all types, including cultural education, became almost impossible”, due to the presence of the Indian army and frequent encounters between army personnel and militants, Abdul Gani Madhosh, a former professor at Kashmir University, told IPS.

The Academy of Art, Culture and Languages, which used to organise cultural programmes in the Kashmir valley prior to 1989, was forced to cease its operations.

Now that the resistance movement has laid down its arms and embarked on a road of peaceful protest, the need to nurture cultural life is urgent.

Since early 2000, youth resistance to the military occupations by both India and Pakistan has followed a non-violent path, employing such tactics as peaceful demonstrations and the use of social networking sites to discuss the political situation.

“Remember: education, including cultural education, is an activity of peace,” Madhosh stressed, referring to the fact that 80 percent of youth from the 15-35 age group are in favour of freedom and are still frustrated by the level of military presence in the region.

Tens of thousands of troops are stationed at intervals across Indian-administered Kashmir to oversee a population of 7.5 million people. The Association of Parents of Disappeared Persons (APDP) says that 10,000 people have been disappeared since the inception of militancy in 1989. Unless these issues are addressed, it will be very difficult for Kashmir’s residents – especially the younger generation, which has known nothing but war – to find the time for cultural appreciation.