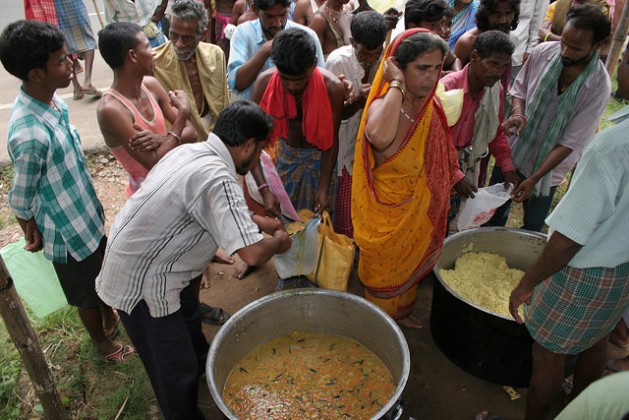 Flash floods carried away everything except the clothes on their backs. People take emergency food in plastic bags in a coastal village in India’s eastern state Odisha. Credit: Manipadma Jena/IPS

NEW DELHI, Dec 13 2016 (IPS) - Tasura Begum straightens up from picking a bushel of green chilis and looks at the mighty Padma River flowing by, wondering whose life it ruined today.

She remembers how she and her husband fretted about the river getting closer and closer to their thatched hut and tiny farm in Bangladesh’s Beparikandi village until, on that fateful day, they watched it engulf all their hopes and dreams.

“Despite the clear writing on the wall, the magnitude of climate change as an additional ‘push’ factor remains largely invisible in the migration discourse.” --Harjeet Singh of ActionAid

Soon her husband had to take a job as an unskilled construction worker in Saudi Arabia to repay the loan they had meanwhile taken to buy food and rebuild another hut further back from the river. Her teenage son left for the capital Dhaka, leaving Tasura Begum with her youngest 4-year-old boy and an adolescent daughter who dreamt of becoming a doctor so she could cure her mother’s painful kidney ailment.

The three international organisations warn of the devastating and escalating strain climate change places on migration, particularly in Bangladesh, India, Nepal and Sri Lanka, and call for governments to recognise and fill the policy gap before it blows up into mass migration, unrest and large-scale conflict over resources.

Sudden events such as cyclones and flooding can lead to temporary displacement. However, if these events happen repeatedly, people lose their savings and assets, and may eventually be forced to move to cities or cross borders, even illegally, to find work, several studies have shown. 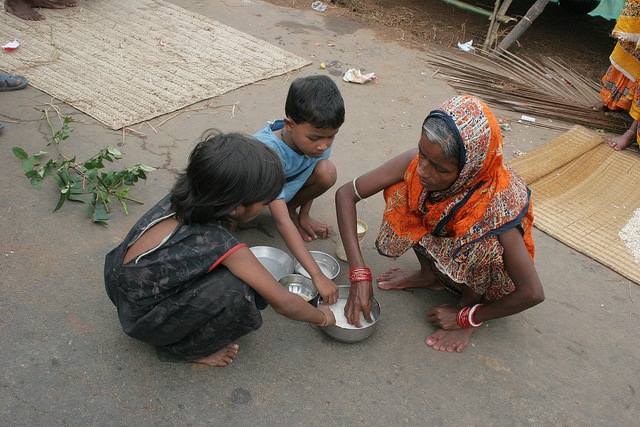 A week after losing their home to flood waters, this homeless family in Odisha still lives on an asphalt road. The father has left to work in a brick kiln in the neighbouring state of Andhra Pradesh. Credit: Manipadma Jena/IPS

Slow onset events such as salinization from rising sea levels and loss of land to erosion also push people out of their homes in South Asia, where livelihood dependence on natural resources – as well as poverty – is high.

The impact of drought and crop failure this year was spread across India, Nepal, Bangladesh and Sri Lanka, affecting 330 million people in India alone.

In 2015, South Asia – recording 52 disasters and 14,650 deaths, a staggering 64 percent of the global fatalities – was the most disaster-prone sub-region within Asia-Pacific, which itself is the world’s most disaster-prone region, according to the UN Economic and Social Commission of Asia and the Pacific (UNESCAP).

The UN Global Environment Outlook (GEO-6) 2016 warns 40 million Indians and 25 million in Bangladesh (approximately 3 percent and 16 percent of respective populations) will be at risk from rising sea levels by 2050.

“Despite the clear writing on the wall, the magnitude of climate change as an additional ‘push’ factor remains largely invisible in the migration discourse,” Harjeet Singh, ActionAid’s Global Lead on Climate Change, told IPS.

“The invisibility of those forced away from their homes as a result of climate change means that they are falling through gaps in policy, and they may not be granted the same protections and rights granted to internally displaced persons or refugees,” Singh added.

“Populations forced to migrate, driven by desperation and lack of options, are least secure when they leave home for unknown lands. They have to opt for lower jobs, are often exploited and face harassment from enforcement agencies,” Sanjay Vashist, Climate Action Network – South Asia’s Director, told IPS.

The report also flags the growing and alarming trend of women and girls trafficked into sexual exploitation as a result of migration, as well as the disproportionate burden placed upon women left behind at home like Tasura Begum, whose husbands are forced to migrate.

Women migrating alone across borders are most vulnerable to exploitation and abuse. Young Nepali and Bangladeshi females, migrating alone to seek work in India, have no other contact except those of local ‘agents’ who promise to arrange employment, mostly as housemaids. But in many cases, these agents are in fact traffickers. Once the migrating girls arrive in cities they may be forced to work in brothels against their will.

While this phenomenon has been taking place for years and is widely recognized, the extent to which climate change is contributing to this and further threatening girls’ safety is not yet fully understood, the report points out.

According to the World Bank 12.5 percent of households in Bangladesh, 14 percent in India and as much as 28 percent in Nepal have a female head and many of these are as a result of male migration.

Farm or other work-related stress, increased childcare and household burdens, high occurrence of poor health and threat of physical and sexual violence are faced by women left behind, according to a 2015 UN Women documentation of the experiences of Tasura Begum and others.

“Clearer definitions are needed for climate migration and displacement, and these need to provide the basis for data gathering, analysis and clear right-based policies,” Singh told IPS from the Global Forum on Migration and Development in Bangladesh where civil society organizations, policy makers, UN bodies and migration experts met over Dec. 8-12 to find solutions to migration issues.

“The UN’s Warsaw International Mechanism on Loss and Damage must work to ensure legal protection for people forced to migrate or displaced by climate change,” Singh said.

The Ganges, Brahmaputra and Indus rivers originate in the Himalayas region and pass through two or more countries. These rivers provide critical water, ir­rigation, livelihood, food security and culture to hundreds of millions of people in river basins.

India, Nepal, Bangladesh, Pakistan and China have tried to navigate these trans-boundary water flows through a series of treaties and ongoing negotiations. However, amid geopolitical power tussles, the implementation of these legally binding bilateral agreements is often being contested. New dam or hydropower developments constantly bring newer dimensions to the debate.

“The governments of South Asia must recognize that climate change knows no borders,” Vashist said, adding, “governments have a responsibility to use our shared common ecosystems, rivers, mountains, history and cultures to seek common solutions to the droughts, sea-level rise and water shortages being experienced.”

“South Asian solidarity will also put the lid on regional xenophobia before it can rear its ugly head,” he added.