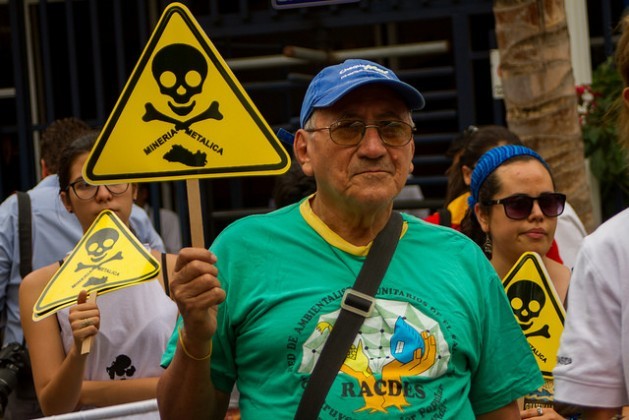 César Augusto Jaco, a member of an environmental community network, takes part in one of the demonstrations in support of the new law that bans metal mining in El Salvador, on March 29, in front of parliament. The measure, the first of its kind in the world, responds to a lengthy struggle by environmentalists and local communities. Credit: Edgardo Ayala/IPS

SAN SALVADOR, Apr 3 2017 (IPS) - El Salvador, Central America’s smallest country, has become the first country in the world to pass a law banning metal mining in all its forms, setting a precedent for other nations in the world to follow, according to activists and local residents.

“This is historic; we are sending a signal to the world that countries can take a different path and say ‘no’ to the mining industry,” Edgardo Mira, an environmental activist with the National Council Against Metal Mining, an umbrella group of local organisations, told IPS.

With 69 votes out of 84, the members of the single-chamber Legislative Assembly passed on March 29 the landmark law, whose 11 articles amount to a blanket ban on mining, whether underground or surface.

Dozens of jubilant activists gathered early that day outside parliament to demand the approval by the plenary session of the ban agreed the day before by the legislature’s Environment and Climate Change Committee.

““This is historic; we are sending a signal to the world that countries can take a different path and say ‘no’ to the mining industry.” -- Edgardo Mira

“I have visited the old mines which were active last century, where you can clearly see the impacts, such as acid drainage in the rivers, which would happen in the rest of the country,” retiree César Augusto Jaco, from the populous neighborhood of Cuscatancingo in the capital, told IPS.

Holding a sign with a yellow background and an image of a skull in black, the 76-year-old member of the Network of Community Environmentalists of El Salvador, said outside parliament: “Mining is disastrous, there’s no way it’s not going to damage our water sources.”

The risk of damaging the country’s groundwater reserves has been one of the main reasons driving the struggle of activists against the extractive industry, which uses millions of litres of water to obtain gold.

El Salvador is one of the most environmentally vulnerable countries, according to international agencies.

The law also prohibits the use of cyanide, mercury and other elements used in mining But it offers a two-year grace period to small-scale miners, so they can find another source of income.

Mira, from the National Council, estimated the number of artisanal miners at about 300, mostly in the San Sebastián mine in Santa Rosa de Lima, in the eastern department of La Unión.

Because the law is retroactive, it blocks all pending exploration permits.

The 2015 report “The Threat of Metal Mining in a Thirsty World,” written by McKinley and published by the UCA, documents the cases of countries where the activity has been restricted, but not banned outright.

In 2002, the government of the province of Oriental Mindoro, in the Philippines, passed a 35-year moratorium on mining projects, and in 2011, the province of Zamboanga did the same with open-pit mining.

In 2014, the U.S. Environmental Protection Agency (EPA) vetoed the Pebble mine in the state of Alaska, to protect the largest habitat in the world of red or sockeye salmon (Oncorhynchus nerka).

Earlier, in 1989, the then president of Venezuela, Carlos Andrés Pérez, imposed a 50-year moratorium on all mining activity in the southern state of Amazonas. But that did not stop the expansion of illegal mining in that jungle region, while the current government reverted the measure de facto, allowing mining activity in the area.

“El Salvador is the first country in the world to evaluate the costs and benefits of the mining industry for the country and to exercise its right to say no,” McKinley told IPS.

The approval of the law was a product of many factors that combined to convince lawmakers to finally respond to the longstanding call from activists and local communities for a ban.

Among them, the pressure from environmentalist organisations that have struggled to that end for over a decade, and from the Catholic Church, which endorsed the popular demand.

On March 9, San Salvador’s archbishop, Luis Escobar Alas, led a march against metal mining to parliament, where they handed over a bill drawn up by the UCA, which formed the basis of the law that was finally adopted.

“The Catholic Church has enormous power in El Salvador, and its support for the struggle by local communities did not start this year, but in 2007, when it took a stance, at the Episcopal Conference, with its document Let’s Take Care of Everyone’s Home,” said McKinley.

The law is the culmination of years of struggle by environmental organisations and community leaders against, above all, the El Dorado mine in the central department of Cabañas, operated by the Pacific Rim company, now OceanaGold since it was acquired in 2013 by the Australian-Canadian corporation.

The company sued El Salvador for 250 million dollars in the International Centre for Settlement of Investment Disputes (ICSID), after the rightwing Salvadoran government of the time cancelled its exploration permit in 2008.

The two successive governments of the leftist Farabundo Martí National Liberation Front have maintained this de facto moratorium since 2009.

In October 2016, ICSID ruled in favour of El Salvador, and ordered the company to pay eight million dollars in legal expenses, which it has failed to do.

And in a new setback, the body ruled on March 28 that the corporation must also pay interest on the debt, at a monthly rate between two and five per cent, on back payments dating to October.

These rulings also contributed to generating a climate conducive to approval of the ban.

“We are celebrating the triumph of our struggle, and our celebration continues out there in the communities where the people have been fighting,” Rina Navarrete, the coordinator of the Friends of San Isidro Cabañas Association, told IPS.i

She added that the accomplishment was a vindication of the work by “the fallen martyrs in this struggle against the mining corporation” – a reference to Ramiro Rivera, Marcelo Rivera (not related) and Dora Alicia Sorto, environmentalists killed by hitmen between June and December 2009, in the town of Cabañas.

Navarrete, a single mother of two who lives in the municipality of Llano de la Hacienda, in Cabañas, has taken up the work of the late Marcelo Rivera.

The activists were shot presumably because of their opposition to the activities of Pacific Rim in that area, although this has not been confirmed by the legal authorities.