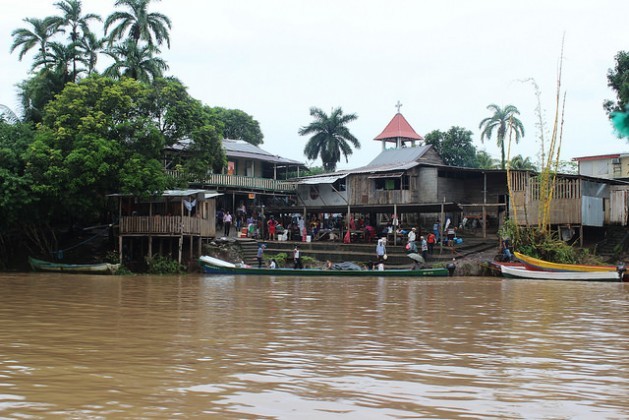 A dock in the coastal community of Laguna de Perlas, in the municipality of Bluefields, which owes its name to its location along the longest coastal lagoon in Nicaragua, 40 km north of the city. Coexistence with maritime, river or lake water is part of life in the South Caribbean Region, but climate change is compelling the local population to make changes. Credit: José Adán Silva/IPS

BLUEFIELDS, Nicaragua , Apr 22 2017 (IPS) - The effects of climate change have hit Nicaragua’s Caribbean coastal regions hard in the last decade and have forced the authorities and local residents to take protection and adaptation measures to address the phenomenon that has gradually undermined their safety and changed their way of life.

Bluefields, the capital city of Nicaragua’s South Caribbean Autonomous Region, has endured a series of hurricanes, floods due to heavy rains or storm surges, droughts, environmental pollution and general changes in temperatures, which have caused economic damages to the local population.

The latest catastrophic event along Nicaragua’s eastern Caribbean coast was Hurricane Otto, which was a category 2 storm on the five-point Saffir-Simpson scale when it hit in October 2016.

The structural damages and heavy flooding were the same as always, but something changed for the better: there were no fatalities, wounded or missing people in Nicaragua.

“The population in this area has suffered a lot due to climate change, not only because of the hurricanes and flooding from the sea and rivers, but due to the climate variability. They have lost crops because of droughts or too much rain. They used to know how to interpret the signs of rain, but not anymore.” -- Guillaume Craig

The 10,143 people from the 69 coastal communities directly affected in the South Caribbean Region survived with no injuries, having taken refuge in shelters set up by the governmental National Agency for Disaster Management and Prevention (SINAPRED).

This was due to the gradual development of social awareness in the face of climatic events, according to Ericka Aldana, coordinator of the non-governmental international organisation Global Communities’ climate change project: “Citizens Prepared for Climate Change”.

“Historically, Nicaragua’s South and North Caribbean regions have been hit by natural disasters due to their coastal location and environment surrounded by jungles and big rivers which have served as means of transport. But with climate change the vulnerability increased, and it was necessary to make an effort to change the mindset of the population,” Aldana told IPS.

Her organisation, together with the civil and military authorities, have organised conferences, discussion forums and environmental awareness campaigns, in addition to prevention and coastal community rescue plans in the entire South Caribbean Region.

The two autonomous Caribbean coastal regions represent 52 per cent of the territory of Nicaragua and are home to 15 per cent of the country’s 6.2 million people, including a majority of the indigenous and black populations.

Aldana said that in the coastal communities, especially Corn Island and Little Corn Island, located in the Caribbean Sea off the coast of Bluefields, the waves changed due to the intensity and instability in wind patterns.
This makes it difficult to maneuver fishing boats, alters fishing cycles, drives away the fish, and erodes the coasts of the two small islands.

On Little Corn Island, local resident Vilma Gómez talked to IPS about the threats posed and damages caused by the change in ocean currents, winds and waves.

As an example, she said that she has seen almost four km of coastline submerged due to the erosion caused by waves over the last 30 years.

The municipality of Corn Island, comprised of the two islands separated by 15 km, with a total area of 13.1 square kilometres, is one of the most populated areas in Nicaragua’s South Caribbean Autonomous Region, with about 598 people per square kilometre. 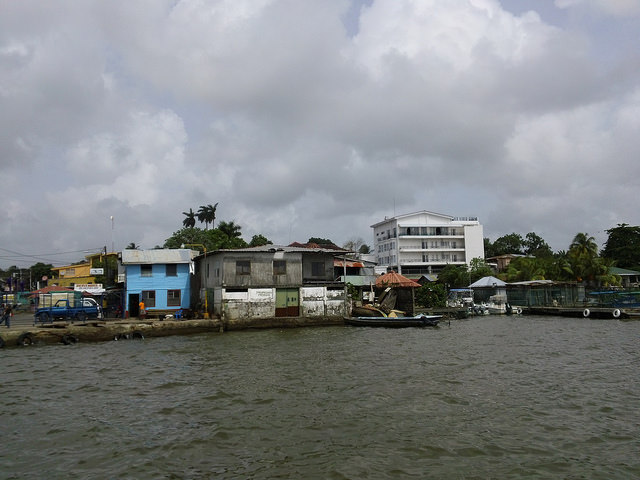 Part of the central region of the city of Bluefields, in Nicaragua’s South Caribbean Autonomous Region, from the access pier to Bluefields lagoon, with buildings at the water’s edge. The municipalities’ urban and rural residents learned to raise their houses on pilings, among other measures to face the increasingly frequent floods. Credit: José Adán Silva/IPS

Gómez said that on her island, infrastructures such as seawalls was built with government funds, to contain the coastal erosion, the damage in wetlands, the shrinking of the beaches and the impact on tourism, which together with fishing make up 90 per cent of the municipality’s economic activity.

But in her opinion, they are futile efforts in the face of the strength of the sea. “I believe that if this continues this way, in a few years the island will become uninhabitable, because the sea could swallow it entirely after contaminating the water sources and arable lands,” lamented Gómez.

Other communities located near Bluefields Bay and its tributaries suffer ever more frequent storm surges and sudden floods, that have destroyed and contaminated the wetlands.

But once the shock and fear were overcome, the population started to try to strengthen their capacities to build resilience in the face of climate change, said Aldana.

Guillaume Craig, director of the environmentalist organisation blueEnergy in Nicaragua, is involved in the project “Citizens Prepared for Climate Change”, in which authorities, civil society and academia together in Bluefields carry out campaigns to strengthen the Caribbean communities’ response capacity to the impacts of climate change.

“The population in this area has suffered a lot due to climate change, not only because of the hurricanes and flooding from the sea and rivers, but due to the climate variability. They have lost crops because of droughts or too much rain. They used to know how to interpret the signs of rain, but not anymore,” Craig told IPS.

As a result, he noted that “the wells dry out in January, when that used to happen in April, the rains in May sometimes fall in March, or do not occur until July. It is crazy, and the local people did not know how to handle it.”

After years of training and campaigns, the locals learned to apply techniques and methods to save water, plant crops resistant to the changes, and techniques for building in coastal areas, which started to suddenly flood due to storm surges or heavy rains.

Climate change has already cost the communities a great deal: a fall in the production of basic grains, a loss of biological diversity and forest resources, water shortages, degradation of soils, salinization of wells, floods in low-lying coastal areas and landslides, among other phenomena.

“The rise in temperatures is affecting people’s health and producing cardiac problems, increasing the populations of vectors that carry diseases, erosion by sea waves and loss of soil, and increasing energy consumption and the risk of fires. The rise in the water level is driving up the risks,” said Craig.
Bluefields, originally a pirate base of operations, is 383 km from the capital city, Managua, and can only be reached by air or by boat along the Escondido River from the El Rama port, located on the mainland 292 km from the capital.

The population of just over 60,000 people is multi-ethnic: Creoles, mestizos (mixed-race), Rama and Garifuna peoples, and descendants of English, French or Asian immigrants.

It faces a bay that serves as a barrier to the sea’s direct waves, and is surrounded by rivers and lakes that connect the region with the Pacific Ocean and the North Caribbean. The elevation above sea level is barely 20 metres, which makes it especially vulnerable.

Marlene Hodgson, who lives in the impoverished coastal neighborhood of El Canal, on the outskirts of the city, told IPS that she and her family have been suffering from the bay’s swells for years.

“Sometimes we did not expect it and all of a sudden we had water up to the waist. Now we have raised the house’s pilings with concrete and dug canals and built dikes to protect it. But we have also become aware of when they come and that allows us to survive without damages,” said the woman of Creole ethnic origin.

After the storms, many houses in the area were abandoned by their occupants, who moved to higher and less vulnerable lands.

The phenomenon also disrupted the economy and the way of life of the traditional fishers, said Alberto Down.

“Just 20 years ago, I would throw the net and in two hours I would get 100 fish,” he told IPS. “Now I have to spend more in fuel to go farther out to sea and I have to wait up to eight hours to get half of that. And on some occasions I don’t catch anything,” said the fisherman from the 19 de Julio neighbourhood, one of the most vulnerable in this area forever threatened by the climate.