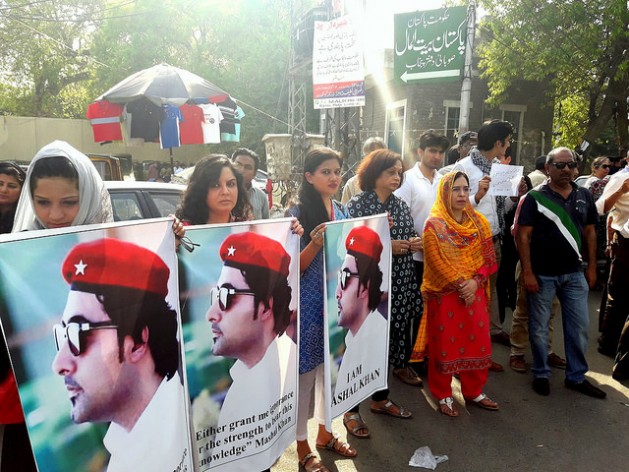 KARACHI, May 5 2017 (IPS) - Aimal Khan, 27, an airman in Pakistan’s Air Force, warns the country will end up in the throes of mayhem if the state does not do something about the abuse of the blasphemy laws. “People will use it to settle personal scores,” he said.

He should know. His younger brother, Mashal Khan, 25, was brutally killed by a mob roused to a frenzy by allegations he had committed blasphemy. “They became the judge, the jury and the executioner,” Aimal said.

"It's pretty obvious that religious passions are easily ignited because day in and day out all we hear about is religious sermonizing in one form or the other." --Dr. Pervez Hoodbhoy

Studying at the Abdul Wali Khan University in Mardan, in Pakistan’s Khyber Pakhtunkhwa province (KPK), Khan was known for speaking out against corruption and injustices prevalent in society. On April 13, he was shot, stripped and not satisfied with that, the mob then beat up his corpse as shown in the graphic video footage.

The police investigation following his killing, however, found no evidence he had committed blasphemy. The government has since arrested 47 of the 49 accused.

Political activist and lawyer Jibran Nasir told IPS that the country’s blasphemy laws are not just used by the land mafia to evict people, but often for raising funds and recruiting members by rogue organisations. “The social media has become a more potent tool where one fake account with just one blasphemous tweet can kill someone,” he said alluding to the fake account created in the name of Mashal Khan to falsely establish he’d committed blasphemy.

According to opposition leader Syed Khursheed Shah, since 1990, 65 people have been killed on allegations of committing blasphemy and no one was executed for the crimes.

A month later, Aimal says the family continues to receive phone calls expressing condolences from all across Pakistan. Ordinary people to celebrities and even politicians have visited their home to offer comfort.

“After my brother’s murder, we thought humanity had fled from this country, but I tell you, it’s quite the opposite. We have been given unconditional support,” Aimal said, his voice filled with emotion, over the phone from his village Zaida in Swabi district, KPK.

He hopes his family’s loss can open the door to a meaningful debate on reviewing the infamous laws. 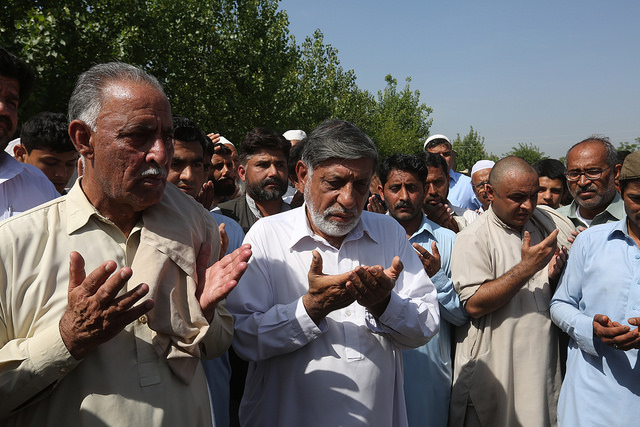 Muhammad Iqbal Khan (left), the father of Mashal Khan, who was murdered by a religious mob in Pakistan. The men offer prayers. Credit: Abdul Hameed Goraya/IPS

Aimal’s sentiments are echoed by Reema Omer of the International Commission of Jurists. “If Mashal’s most tragic killing could revive the debate and lead to blasphemy reform, that would be a fitting tribute to his bravery and courage,” she told IPS.

“The law should have been reviewed and reformed a long time ago. These incidents are latest but not the first,” pointed out Nasir. While exploitation of these laws can be corrected through procedural reforms, he said what was innately wrong was that they are in violation of Hanafi jurisprudence [followed in Pakistan] which gives no death penalty to non-Muslims for blasphemy but Pakistani law does.

Asia Bibi, a Christian, has been on death row for the last seven years. International Christian Concern  has termed her case one of the most “controversial” and best examples of the abuse of blasphemy laws.

While a complete scrapping of the law is unlikely, many see this as an opportunity to revive a debate. In 1986, to ‘Islamise’ the country, Pakistan’s then leader General Mohammad Zia ul Haq enacted these laws.

But anyone who has tried to even tried to open debate has either been censured or silenced.

In 2011, Salmaan Taseer, the then governor of Punjab, was assassinated for supporting Asia Bibi, accused of blasphemy. His murder was followed by that of Shahbaz Bhatti, a minister who had talked of misuse of the laws.

Jamiat Ulema-e-Islam (Fazal) chief Maulana Fazalur Rehman, enjoying a huge following in the KPK, while condemning Khan’s lynching, said he was well aware that liberal forces would use this incident and call for amendment in the laws, but warned that no one would be allowed to touch it.

“For a few days when there was such an outcry it was felt the time for a critical review of the blasphemy laws had arrived,” said I.A. Rehman, noted rights activist, speaking to IPS. “The clerics were on the defensive.”

This euphoria was short-lived.

Rehman said the lawmakers belonging to religious parties disowned the resolution in the assembly which they had earlier backed.

In fact, soon after Mashal’s lynching, the legislative assembly of Pakistan-administered Pakistan passed two resolutions regarding the finality of Prophet Mohammad (Peace Be Upon Him) and respect of his family and companions. 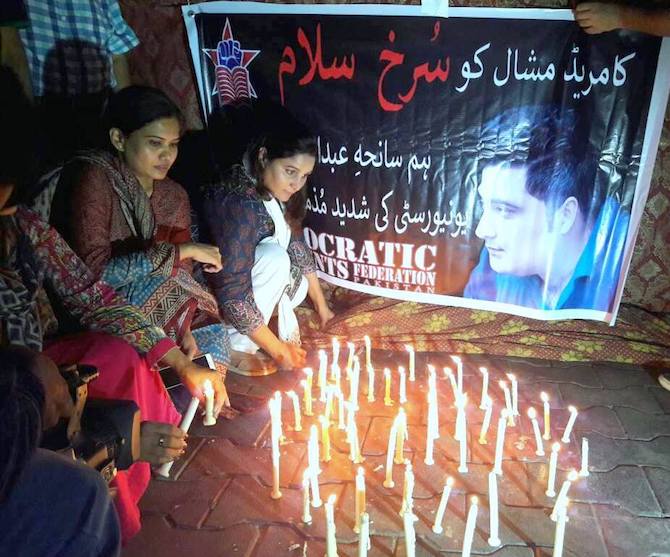 The resolution also stated that if Ahmadis (declared non-Muslims by the constitution of Pakistan) claim themselves to be Muslims, they should be charged with blasphemy.

He has little hope in Prime Minister Nawaz Sharif, who himself narrowly survived ouster and was saved by a supreme court verdict last month, after the opposition had taken him to court on charges of corruption.

“It [ruling Pakistan Muslim League — PML-N] will not take on the clerics at this stage,” Rehman said, lamenting: “The chance of doing something about blasphemy will again be missed.” But then he never had much hope attached to Sharif in the first place. “The PML-N is an accomplice to orthodoxy therefore there is no hope of a change for the better.”

However, there are others who say the laws have nothing to do with the recent episodes of lynching. The laws were not even invoked once.

Following the killing of Khan, in another part of Pakistan, a man was shot dead by his three sisters. He was accused of blasphemy in 2004 and the sisters in their confessional statement said they were incited by the imam of their neighbourhood mosque.

The same day a mob attacked a man after Friday prayers in northern Pakistan town of Chitral, and was saved in time by the mosque imam and the police officers who intervened and rescued him. The man was mentally ill and was on his way to Islamabad for treatment.

“It’s not the law, it’s the people, a people that have gone berserk,” said eminent educationist, Dr Pervez Hoodbhoy, who teaches physics at universities in Islamabad and Lahore.

That is why he insists on teaching Occam’s Razor in his classes. “It’s a metaphor for parsimony of assumptions. Start with the obvious, if that doesn’t work then assume that something more complicated is involved,” he explained, adding: “In this [lynching] particular case, it’s pretty obvious that religious passions are easily ignited because day in and day out all we hear about is religious sermonizing in one form or the other.”

But Omer thinks otherwise. “Killings in the name of blasphemy and mob violence after blasphemy allegations cannot be separated from the law and its mandatory death punishment; the impunity – even patronage – enjoyed by perpetrators in the past; and the state’s use of blasphemy to clamp down on dissenting/critical voices,” she said.

Recalling the climate just before Khan’s killing, she said there was renewed movement by various state institutions condemning ‘blasphemers; calling blasphemy ‘an act of terrorism; and urging people to report blasphemy so strict action could be taken against them.

Nasir, too, believed that when the parliament associates the death penalty with a crime it “does trickle down into society, socially and politically”. He gave the example of the arrest of three people for desecrating a Hindu temple and tried under section 295A (of blasphemy laws) which does not carry death penalty but shows clearly that blasphemy against other religions does not create a “huge social or political uproar”.

In addition, Omer said, the existence of the blasphemy laws in their current form gives a certain “cloak of legality” to such calls. “Which is why we shouldn’t lose sight of the connection between the existence of the blasphemy laws and the kind of violence we saw in Mardan, in Chitral, and before that in Kot Radha Kishan and other cases,” she said.

A large number of people accused of blasphemy, or even convicted of blasphemy by trial courts for defiling the Holy Quran, suffer from mental illnesses, said Omer. “This too is a common thread in how blasphemy laws play out in practice,” she said.”This is a damning indictment of the prosecution and police, who allow these cases to continue despite the fact that the accused do not have the requisite capacity to commit a crime.”