Global Devaluation of Work Drives Up Unemployment in Brazil 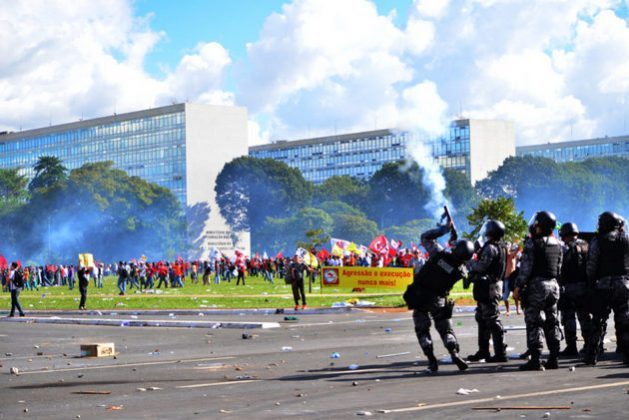 Police officers use tear gas to crack down on a May 24 trade union march heading towards the Brazilian Congress to protest the projected labour and social security reforms which cut social rights. Credit: UGT

RIO DE JANEIRO, Jun 24 2017 (IPS) - In addition to driving up the number of unemployed people to 14.2 million, the severe recession of the last two years led Brazil to join the global trend of flexibilisation of labour laws in order to further reduce labour costs.

Creating more jobs without affecting rights is the basic argument of the government and advocates of the reform that has made its way through the lower house of Congress but is pending a vote in the Senate, announced for the end of the month.

“Increasing job insecurity will be the consequence of this measure,” said Ricardo Antunes, sociology professor at the University of Campinas, in the southern state of São Paulo.

This process, which “completely undermines labour rights,” according to the academic, also includes a law on outsourcing in force since March, and a social security reform still in the initial stages in parliament, and whose approval is unlikely given the requirement of a special two-thirds majority in both houses.

“Outsourcing does away with the employee-employer relationship, with workers frequently moved from one worksite or job to another. Workers lose their identity, no longer knowing if they are steelworkers or service providers, or to which category they belong.” -- Wagnar Santana

“This is a global trend that advances in a country depending on the level of resistance it runs into: slower where the trade union movement is strong, like in Germany and France, and faster where trade unionism is weaker, such as Great Britain and the United States,” Antunes told IPS.

In Brazil, workers are facing this offensive already weakened by unemployment, which is projected to remain high for a long time to come.

According to the state Brazilian Institute of Geography and Statistics (IBGE), unemployment stood at 13.7 per cent in the first three months of 2017, or 14.2 million people in a country of 207.6 million with a workforce of 103.1 million.

But underemployment amounted to 24.1 per cent, or 26.5 million people who work part-time or just a few hours a week or are considered only “potential” workers, the IBGE reported.

In addition, the lineup of forces in Congress is highly unfavourable to labour rights, with the government of President Michel Temer enjoying a vast majority, although it is vulnerable to allegations of corruption against the president and almost all of the leaders of the ruling coalition, who face possible prosecution in the Supreme Court.

The legislation proposed by the government “de-regulates labour relations, with arguments that reveal ignorance or bad faith,” argued Wagnar Santana, president-elect of the Union of Steelworkers of the ABC region, an industrial region in greater São Paulo that gave rise to the Workers’ Party (PT) and the CUT central union.

“This de-regulation did not increase employment in countries such as Spain, Mexico and Portugal, but instead drove up the rate of informal work. In Mexico, people who work for Volkswagen need another job as well to have a decent standard of living,” said the trade unionist, who works for the German car-maker.

Keeping formal labour rights such as a weekly day off and health coverage on the books means little without the possibility of enforcing them, due to the growth of informal work, employment instability and outsourcing, and the weakness of the trade union movement, he told IPS.

“Outsourcing does away with the employee-employer relationship, with workers frequently moved from one worksite or job to another. Workers lose their identity, no longer knowing if they are steelworkers or service providers, or to which category they belong,” complained Santana.

Trade unions have trouble organising, in the construction industry for example, where job rotation is frequent, he said.

If collective bargaining agreements between workers and employers trump labour laws, as the government’s proposed reform stipulates, the rights of workers would be undermined.

The strongest and best organised trade unions, such as the ones in large industrial cities, could negotiate better agreements and ensure that they are respected, but many others would not be able to. “That would end up weakening all of us, since we are not isolated,” said the trade unionist.

There are other factors that conspire against labour in Brazil, besides the high unemployment and the economic crisis aggravated by political troubles. The process of deindustrialisation weakens even the most combative trade unions, such as the steelworkers union.

The union of ABC, which represented up to 150,000 workers in the 1980s, currently has only 73,000 members, based in the municipalities of São Bernardo do Campo, Diadema, Ribeirão Pires and Rio Grande da Serra, after many ups and downs over the two past decades, Santana noted.

From the steelworkers of São Bernardo do Campo emerged trade unionist and political leader Luiz Inácio Lula da Silva, who founded the Workers Party (PT) in 1980, which he led to power the first day of 2003 and with which he governed Brazil until the last day of 2011, when he handed over the presidency to his fellow party member Dilma Rousseff, who was removed from office in August 2016.

The crisis and international competition also contributed to the rise in unemployment and to lower participation by industry in Brazil’s GDP.

But it is the devaluation of work at a global scale which Antunes attributes to the transnationalization of large companies, the new modes of production and the hegemony of finance capital, which has led to the setback in labour standards that is being pushed through in Brazil.

It is a return to “archaic” labour relations that is almost like a return to slavery, according to the expert in the sociology of labour. “Slaves used to be sold, now they are rented” through outsourcing, he said.

In 1995, Antunes published the book “Goodbye to Work?”, in which he discusses the trend towards increasing informality and precariousness of labour, and “21st century slavery”. “Precarious work used to be an exception, now it has become the rule,” he said.

One example is the British “zero-hour contract” where the employer is not required to provide any minimum working hours. One million people in the UK are working under these contracts, which puts them at the disposal of the company, to be called in to work when needed, and earning only for the hours they work, without full labour rights, said Antunes.

In Brazil this modality was included in the labour reform as “intermittent employment”.

The incorporation to the labour market of China’s huge reserves of labour power contributed to the devaluation of work around the world.

“They are qualified workers that the revolution fed and educated. Five years ago China offered poor quality industrial goods, today they have cutting-edge technology,” said the sociologist, adding that Asia has an enormous cheap labour force in countries like India, Vietnam, Bangladesh and Indonesia.

The reduction of costs is widespread. “In Italy they are closing factories that are reopening in Poland or Hungary, cutting monthly wages from 2,000 to 300 euros,” he said, to illustrate.

“There is a new morphology of labour. In Brazil we have 1.5 million workers in ‘telemarketing’ that did not exist before. Remote work, through on-line connection by cellphone or computer, has become widespread,” he pointed out.

But the working class has grown, although it is “more fragmented and diverse than before, and subjected to online work”. New forms of protest are emerging, including “picketing and roadblocks”, in Argentina for example, instead of strikes, he said.

“The outlook for the future is one of struggle, rebellions, as well as repression, massacres. The 21st century will be one of social upheavals”, concluded Antunes.