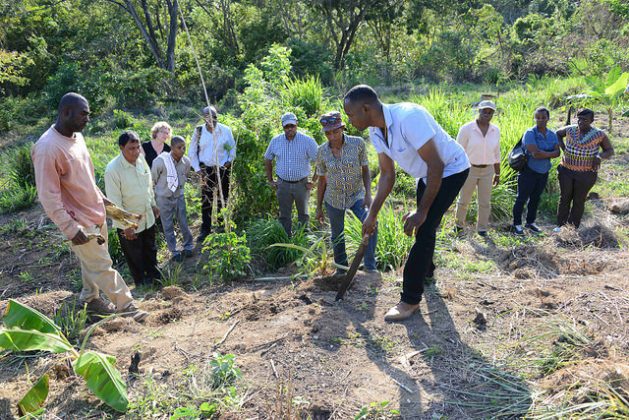 Caribbean farmers have been battling extreme droughts in recent years. A FAO official says drought ranks as the single most common cause of severe food shortages in developing countries, making it a key issue for Caribbean food security. Credit: CDB

BRIDGETOWN, Barbados, Jul 20 2017 (IPS) - The Caribbean accounts for seven of the world’s top 36 water-stressed countries and Barbados is in the top ten. The Food and Agriculture Organisation (FAO) defines countries like Barbados, Antigua and Barbuda, and St. Kitts and Nevis as water-scarce with less than 1000 m3 freshwater resources per capita.

With droughts becoming more seasonal in nature in the Caribbean, experts say agriculture is the most likely sector to be impacted, with serious economic and social consequences.

Expensive, desalinated water resources are also becoming more important in the Caribbean, accounting for as much as 70 percent in Antigua and Barbuda.

This is particularly important since the majority of Caribbean agriculture is rain fed. With irrigation use becoming more widespread in the Caribbean, countries’ fresh-water supply will become increasingly important.

In light of the dilemma faced by the region, the Caribbean Policy Development Centre (CPDC) is spearheading a climate smart agriculture project in which 90 farmers from three Caribbean countries, including Barbados, will participate over the next 18 months.

Executive director of the CPDC Gordon Bispham said the aim of the project, in which farmers from Grenada and St Vincent and the Grenadines are also involved, is to support sustainable livelihoods and reinforce that farming is serious business.

“Farming is not a hobby. It is a business where we can apply specific technology and methodologies, not only to be sustainable, but to be profitable. That is going to be very central to our programme,” Bispham said at the project’s launch last week.

“If we are going to be successful, it means that we are going to have to build partnerships and networks so that we can share the information that we learn from the project. We must not only upscale agriculture in the three countries identified, but bring more countries of the region into the fold,” he said.

According to the FAO, drought can affect the agriculture sector in several ways, by reducing crop yields and productivity, and causing premature death of livestock and poultry. Even a dry spell of 7-10 days can result in a reduction of yields, influencing the livelihoods of farmers.

Farmers, particularly small farmers, are vulnerable to drought as their livelihoods are threatened by low rainfall where crops are rain fed and by low water levels and increased production costs due to increased irrigation, the FAO said.

“Drought ranks as the single most common cause of severe food shortages in developing countries, so this is a key issue for Caribbean food security,” said Deep Ford, Regional Coordinator for FAO in the Caribbean.

He adds that the poor are vulnerable as food price increases are often associated with drought. Expensive, desalinated water resources are also becoming more important in the Caribbean, accounting for as much as 70 percent in Antigua and Barbuda, and this can impact the poor significantly.

The FAO official adds that rural communities are vulnerable since potable water networks are less dense and therefore more heavily impacted during drought, while children are at highest risk from inadequate water supplies during drought.

Bispham said the youth and women would be a focus of the climate smart agriculture project, adding that with their inclusion in the sector, countries can depend on agriculture to make a sizable contribution to their gross domestic product (GDP).

While throwing her support behind the agriculture project, head of the political section and chargé d’affaires of the European Union Delegation to Barbados and the Eastern Caribbean, Silvia Kofler, highlighted the threat presented by global warning.

“Nobody on this planet is going to be untouched by the impact of climate change. It is an all-encompassing threat, and the nature and scale of this global challenge that we are facing demands a concerted action of us all,” she said.

She gave policymakers in Barbados the assurance that the European Union was willing to assist the region in transforming their societies and sectors into smart and sustainable ones, whether in farming or otherwise.

FAO said climate change is expected to increase the intensity and frequency of droughts in the Caribbean, so countries must enhance their capabilities to deal with this and other climate related challenges to ensure food security and hunger eradication.

The Caribbean also experiences intense dry seasons, particularly in years with El Niño events. The impacts are usually offset by the next wet season, but wet seasons often end early and dry seasons last longer with the result that annual rainfall is less than expected.

Chief Executive Officer of the Barbados Agricultural Society James Paul said 2016 was an extremely tough year for farmers, as the limited rainfall affected the harvesting and planting of crops.

But he is encouraged by the fact that unlike last year there is no prediction of a prolonged drought for Barbados.

“Rain if still falling on some areas off and on, so that is a good sign. But the good thing is that we haven’t had any warning of a possible drought and we are hoping that it remains that way,” he said.

“With the little rainfall we got last year, farmers had some serious problems so we are definitely hoping for more rain this time around.”

“Figures showed that approximately 78 per cent or 1,099.1 mm (43.27 inches) of the total rainfall measured last year was experienced during the wet season (June-November) as opposed to 461 mm (18.15 inches) recorded during the same period of the 2015 wet season.

“However, rainfall data showed that 2015 started out significantly wetter than 2016, with accumulations of over nine inches recorded between January and April as opposed to a mere five inches, which was recorded January to April 2016. A similar rainfall pattern was reported from some of the other stations around the island.”