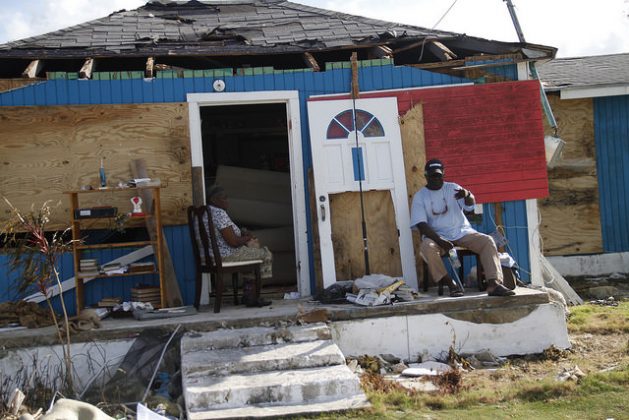 People wait for assistance after the devastation left by Hurricane Matthew in Low Sound, North Andros, The Bahamas in October 2016. A leading climate change mitigation and adaptation activist in the Caribbean says more climate-related disasters can result in climate refugees looking towards the United States for assistance. Credit: Kenton X. Chance/IPS

KINGSTOWN, St. Vincent, Jul 4 2017 (IPS) - A leading climate change mitigation and adaptation activist and former climate negotiator in the Caribbean says that the United States could protect its economic and political interest by helping the region to go green.

Further, James Fletcher, a former Minister of Sustainable Development, Energy, Science and Technology in St. Lucia, says that US President Donald Trump’s emphasis on the coal industry is an attempt to increase jobs that no longer exist, while ignoring numerous opportunities in renewable energy.

“President Trump does not understand, his administration does not understand, that the more that you invest in building resilience in countries like ours, the more it allows us to make that transition away from fossil fuels. It is less of a burden that it places on them.” --James Fletcher

On June 1, Trump announced that he would withdraw the United States from the global climate change deal reached in Paris in 2015, saying that the non-binding accord imposes draconian financial and economic burdens on the United States.

The US President was referring to the Green Climate Fund, for which advanced economies have formally agreed to jointly mobilise 100 billion dollars per year by 2020, from a variety of sources, to address the pressing mitigation and adaptation needs of developing countries.

Fletcher, who was the 15-member Caribbean Community’s lead negotiator for the Paris accord, told St. Vincent and the Grenadines’ Minister of Sustainable Development, Camillo Gonsalves’ “Firm Mediation” podcast, that Trump is wrong.

Former US President Barack Obama had pledged 3 billion dollars to the GCF and delivered 1 billion before leaving office.

“Now, it’s up to President Trump to decide whether he wants to honour that obligation, adjust it — we know he won’t increase it,” Fletcher said, noting that there is nothing compelling the United States to contribute any amount to the GCF.

“It’s just 100 billion that we hope to raise,” Fletcher emphasised.

“The Nationally Determined Contributions are precisely what they say they are: contributions. They are not commitments. No country is being held legally liable… You are not even allowed to name and shame. It is a kind of gentleman’s agreement that we all say yes we agree to do this, we all agree that there will be no backsliding so that we will increase ambition over time and I believe that’s one of the reasons that so many countries found it safe enough to join the Paris Agreement, because they knew there were no legal sanctions if they backed off on the agreement.

“So, to speak of the NDC as basically something that is putting an economic noose around the neck of the United States of America is anything but,” Fletcher said.

He said that the growth of the energy sector in the United States is in renewable energy.

“And if President Trump understood that sector a little bit better, he would understand that that is where he needs to be focusing his attention and not on a coal industry that really does not have any future, from an employment-generation perspective, for the United States.”

Fletcher said that contributing to the GCF “makes sense for the United States of America”.

He said that when there are natural disasters in the Caribbean, “our focus almost immediately turns to our closest wealthy neighbour, which is the United States of America for support.

“And the more you can reduce that burden by making us resilient and reducing the severity and frequency of those natural disasters, then the less of a burden there is on the United States of America.”

Fletcher said climate refugees will be a regular feature of the Caribbean landscape in years to come.

“Because people will lose their livelihoods, people’s home will be displaced, people’s habitats will be destroyed and these people have limited opportunities, particularly in small islands like ours.”

He noted that his country, St. Lucia is 238 square miles and is mountainous, with most of the settlements on the coast.

“When you have lost most of your coastland, where do you go? You don’t go inland. … There are limited opportunities to move inland, so people now start to migrate.”

He said that former US Vice President Joe Biden recognised these reality, and spoke to it in the two US-Caribbean summits that he organised.

“When he saw that the Caribbean was moving away from fossil fuels to renewable energy, he saw two things immediately. He saw an opportunity to lessen the influence of Venezuela in the region, and he saw it from a political vantage point, but he also saw an opportunity for US companies that are involved in renewable energy, in solar and in wind to basically sell their services to the Caribbean because he was concerned that our focus was on Europe any many of us for looking to Europe for technical assistance and support.

“So, there are opportunities there and it is very short-sighted on the part of President Trump to view this almost as a way of causing a resurgence of jobs that no longer exists.”

Fletcher said that while Trump speaks about coal mining jobs, all of the data suggest that there are fewer than 75,000 jobs in the coal industry in the United States and that it is a shrinking sector.

“There are over 650,000 jobs in the renewable energy sector in the United States, and that is growing. So it will make more sense to focus on a growing sector than a dying sector.”

Trump was also concerned that China and India, as large emitters, are allowed to continue to emit, while the US is restricted.

Fletcher said that on this point, what Trump says about China and India “is partially correct”, because they are significant emitters.

“But that’s where the issue of common but differentiated responsibility (CBDR) comes in,” Fletcher said, noting that countries like India and China say they have large sections of their population living in abject poverty and they need to be given some space to develop those sectors.

“And while they have committed — and India is making significant strides in renewable energy — they are saying, you can’t hold us to the same yardstick that you hold countries like Russia, like the United States, that are the cause of the problem that we have right now. Yes, we are working to address our problem but there is still a development trajectory that we are on that you can’t cause us to stop immediately and put us in an even bigger problem than we are right now.”

Fletcher said that if he were asked in an ideal world whether he would like to see India and China reduce their emissions of greenhouse gases more quickly, he would say absolutely and that he would love to see every country do the same thing.