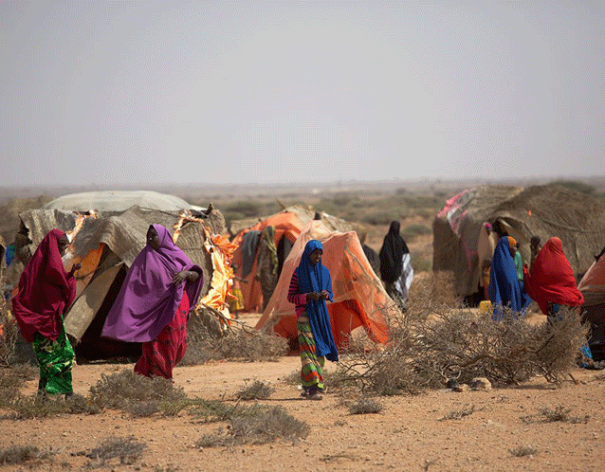 ROME, Oct 14 2017 (IPS) - The world is on the move. More people have been forced to flee their homes than at any time since the Second World War due to increased conflict and political instability, hunger, poverty, and an increase in extreme weather events linked to climate change.

Such a short paragraph hardly depicts the growing drama of migration, but much can be learned from World Food Day 2017, marked on 16 October, which this year proposes specific ways to address the huge challenge of massive human movement.

Large movements of people today are presenting complex challenges, which call for global action, says on this the UN Food and Agriculture Organization (FAO), adding that many migrants arrive in developing countries, creating tensions where resources are already scarce, but the majority, about 763 million, move within their own countries rather than abroad.

Ten facts you need to know about Hunger

1. The world produces enough food to feed everyone, yet, about 800 million people suffer from hunger. That is one in nine people. 60% of them are women.
2. About 80% of the world’s extreme poor live in rural areas. Most of them depend on agriculture.
3. Hunger kills more people every year than malaria, tuberculosis and aids combined.
4. Around 45% of infant deaths are related to malnutrition.
5. The cost of malnutrition to the global economy is the equivalent of USD 3.5 trillion a year.
6. 1.9 billion people – more than a quarter of the world’s population – are overweight.
7. One third of the food produced worldwide is lost or wasted.
8. The world will need to produce 60% more food by 2050 to feed a growing population.
9. No other sector is more sensitive to climate change than agriculture.
10. FAO works mainly in rural areas, in 130 countries, with governments, civil society, the private sector and other partners to achieve #ZeroHunger.

One key fact to understand the current reality is that three-quarters of the extreme poor base their livelihoods on agriculture or other rural activities.

Consequently, creating conditions that allow rural people, especially youth, to stay at home when they feel it is safe to do so, and to have more resilient livelihoods, is a crucial component of any plan to tackle the migration challenge, says the UN specialised body.

Meantime, one key solution is to invest in food security and rural development, which can address factors that compel people to move by creating business opportunities and jobs for young people that are not only crop-based (such as small dairy or poultry production, food processing or horticulture enterprises).

“By investing in rural development, the international community can also harness migration’s potential to support development and build the resilience of displaced and host communities, thereby laying the ground for long-term recovery and inclusive and sustainable growth,” according to the WFD 2017’s theme ”Change the future of migration. Invest in food security and rural development.”

Migration is part of the process of development as economies undergo structural transformation and people search for better employment opportunities within and across countries.

The challenge is to address the structural drivers of large movements of people to make migration safe, orderly and regular, FAO underlines, adding that in this way, migration can contribute to economic growth and improve food security and rural livelihoods.

Pope Francis has joined FAO Director-General José Graziano da Silva, a large number of agriculture ministers, including several from the Group of Seven (G7) most industrialised countries, and the European Commissioner for Agriculture and Rural Development to celebrate World Food Day 2017 at FAO on 16 October.

In an unprecedented gesture, Pope Francis on July this year donated 25,000 euro to the UN Food and Agriculture Organization’s “efforts supporting people facing food insecurity and famine in East Africa.”

World Food Day 2017 has been marked in the context of a world where global hunger is on the rise for the first time in decades. See: World Hunger on the Rise Again

The WFD is marked just a week after FAO launched its State of Food and Agriculture 2017 report, in which it recalls that population growth, increasing urbanisation, modern technologies, and climate change are transforming the world at a fast pace.

The report posed questions such as what direction are these transformations headed in? Are they benefiting the poor and the food insecure? And will the food systems of the future be able to feed and employ the millions of young people poised to enter labour markets in the decades to come? See: How to Eradicate Rural Poverty, End Urban Malnutrition – A New Approach The Day has also been preceded by a new study which reveals a widening gap in hunger. The 2017 Global Hunger Index (GHI) states that despite years of progress, food security is still under threat. And conflict and climate change are hitting the poorest people the hardest and effectively pitching parts of the world into “perpetual crisis.” See: Not True that Hunger Doesn’t Discriminate — It Does

Climate Change and the Migration Crisis

Climate change migration is reaching crisis proportions, they wrote on 10 October, noting that over the last 18 months, some 20 countries have declared drought emergencies, with millions forced off their land.

According to Glasser and Swing, while it may not be the first time, for many, it could be the last time they turn their backs on the countryside and try to make a life in urban slums and informal settlements, adding that for at least the last two years, more people have been forced from their homes by extreme weather events than by conflict.

“We need to set about the long-haul task of making the planet fit for purpose once more through the reduction of greenhouse gas emissions and, in the meantime, making it more resilient to disasters, limiting the damage already done.”

The State of Food Security and Nutrition in the World 2017, for it part, warned that exacerbated by climate-related shocks, increasing conflicts have been a key driver of severe food crisis and recently re-emerged famines.

Conclusion: the causes of growing human suffering have been clearly identified–conflict, political instability, hunger, poverty, and an increase in extreme weather events linked to climate change. Aemedies have been also presented. All is needed is for decision-makers to listen… and implement. The future of migration can in fact be changed.