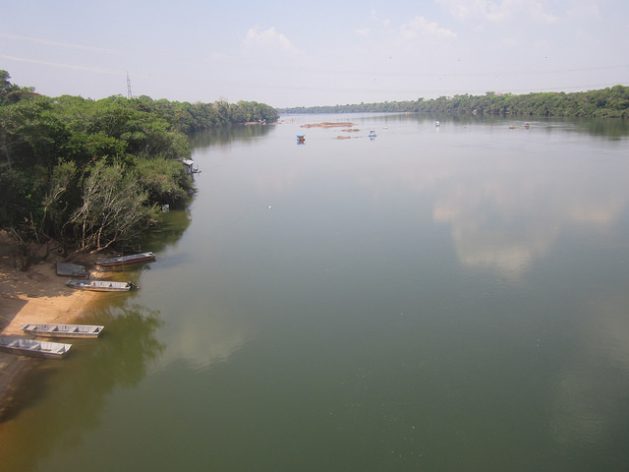 The Teles Pires river along the stretch between Sinop and Colider, two cities from which two new hydropower stations take their name, which are transforming the northern part of the Brazilian state of Mato Grosso, a major energy generator and producer and exporter of soybean, maize and beef. Credit: Mario Osava / IPS

ALTA FLORESTA, Brazil, Oct 16 2017 (IPS) - The dirty water is killing more and more fish and ‘Taricaya’ yellow-spotted river turtles every day. In addition, the river is not following its usual cycle, and the water level rises or declines without warning, regardless of the season, complained three Munduruku indigenous law students in the south of Brazil’s Amazon rainforest.

The change in the natural flow of the Teles Pires river, caused by the installation of four hydropower plants, one in operation since 2015 and the others still under construction, is apparently reducing fish catches, which native people living in the lower stretch of the basin depend on as their main source of protein.

“When the water level rises, the fish swim into the ‘igapó’ and they are trapped when the level suddenly drops with unusual speed,” explained 26-year-old Aurinelson Kirixi. The “igapó” is a Brazilian term that refers to the forested, floodable shore of Amazon jungle rivers where aquatic animals seek food.

That includes the yellow-spotted river turtle (Podocnemis unifilis), a species still abundant in the Brazilian Amazon, whose meat is “as important as fish for us,” the young Munduruku man told IPS during a tour of the indigenous territories affected by the hydroelectric plants.

“It’s even tastier than fish,” he agreed with his two fellow students. But “it is in danger of extinction; today we see them in smaller numbers and possibly our children will only see them in photos,” lamented Dorivan Kirixi, also 26.

“The fish die, as well as the turtles, because the water has gotten dirty from the works upstream,” said 27-year-old Isaac Waru, who could not study Administration because the degree is not offered in Alta Floresta, a city of 50,000 people in the north of the state of Mato Grosso, in west-central Brazil.

Local indigenous people avoid drinking water from the river, even bathing with it, after cases of diarrhea, itchy rashes and eye problems, said the three students who come from three different villages. To return to their homes they have to travel at least eight hours, half by road and the other half by river.

This year they began to study law thanks to scholarships paid by the São Manoel Hydroelectric Plant – also known as the Teles Pires Plant, which is the nearest to the indigenous lands – as part of the compensation measures for damage caused by the project.

They offered a total of seven scholarships for the three affected indigenous communities: the Apiaká, Kayabí and Munduruku, the latter of which is the largest indigenous group in the Tapajós river basin, formed by the confluence of the Teles Pires and Juruena rivers. 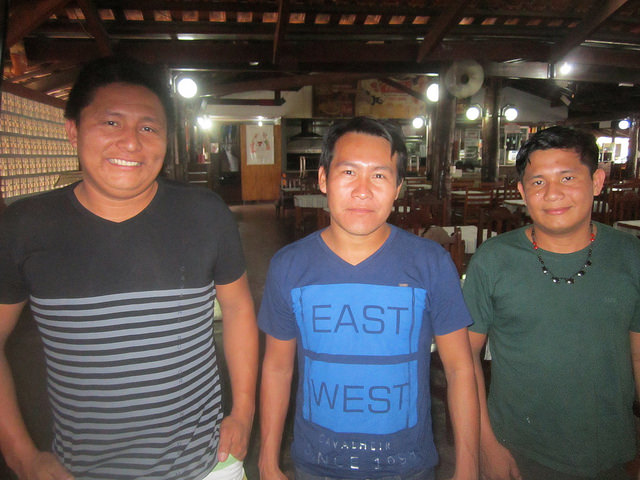 Three Munduruku indigenous students who study law in the city of Alta Floresta, in the southeast of the Brazilian Amazon region, thanks to scholarships from one of the companies building the hydroelectric plants on the Teles Pires river. They are highly critical of the impact of the new dams on their people. Credit: Mario Osava / IPS

The compensations for the indigenous communities were few in number and poorly carried out: “precariously built houses and health posts,” said Patxon Metuktire, local coordinator of the National Indigenous Foundation (FUNAI), the government body for the protection of indigenous peoples in Brazil.

“The companies believe that our problem is just one of logistics, that it is just a matter of providing trucks and fuel, and they forget that their projects damage the ecosystem that is the basis of our well-being and way of life,” he told IPS.

An oil spill further contaminated the river in November 2016. The hydroelectric plants denied any responsibility, but distributed mineral water to the indigenous villages, recalled Metuktire, whose last name is the name of his ethnic group, a subgroup of the Kayapó people.

Fisherpersons are another group directly affected by the drastic modification of the course of the river by the hydropower dams, because their lives depend on flowing water.

Since the vegetation in the river began to die off after the river was diverted to build the dam, fish catches have shrunk, said Solange Arrolho, a professor of biology at the State University of Mato Grosso in Alta Floresta, where she is head of the Ichthyology Laboratory of the Southern Amazon. 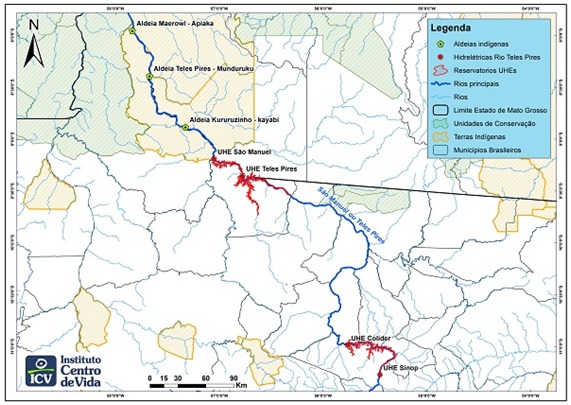 A map of the Teles Pires river, a source of hydroelectric energy in Mato Grosso, in the southeast of the Brazilian Amazon region. In red is the location of hydroelectric power plants that have damaged the way of life of indigenous people and riverbank communities that depend on fishing. Credit: Courtesy of Instituto Ciencia e Vida

The researcher, who said she has been “studying fish for 30” of her 50 years, led a project to monitor fish populations in 2014 in the area of influence of the Colider hydroelectric power station, as part of the Basic Environmental Program that the company that built and will operate the dam must carry out.

Colider, which will start operating in mid-2018, is the smallest of the four plants that are being built on a 450-km stretch in the middle course of the river, with a capacity of 300 MW and a 183-sq-km reservoir.

The others are the Teles Pires and São Manoel plants, downstream, and Sinop, upstream. The entire complex will add 3,228 megawatts of power and 746 square kilometers of reservoirs.

These works affect fishing by altering the river banks and the river flow, reducing migration of fish, and cutting down riverbank forests, which feed fish with fruit and insects that “fall from the trees into the water,” said Arrolho . “The fish do not adapt, they migrate,” he told IPS.

The Teles Pires river is suffering from the accumulated effects of polluting activities, such as soy monoculture, with intensive use of agrochemicals, livestock farming and mining, he pointed out.

The Colider and Sinop plants do not directly affect indigenous lands such as those located downstream, but they do affect fisherpersons.

“They killed many fish with their explosions and digging,” said Julita Burko Duleba, president of the Sinop Colony of Fisherpersons and Region (Z-16), based in the city of Sinop, the capital city of northern Mato Grosso.

“Fish catches in the Teles Pires basin have dropped: we used to catch over 200 kilos per week, but now we catch a maximum of 120 kilos and on average only between 30 and 40 kilos,” she said.

At the age of 68, she now does administrative work. But she was a fisherwoman for more than two decades, and her husband still works as a fisherman, the activity that allowed them, like other colleagues, to live well and buy a house. 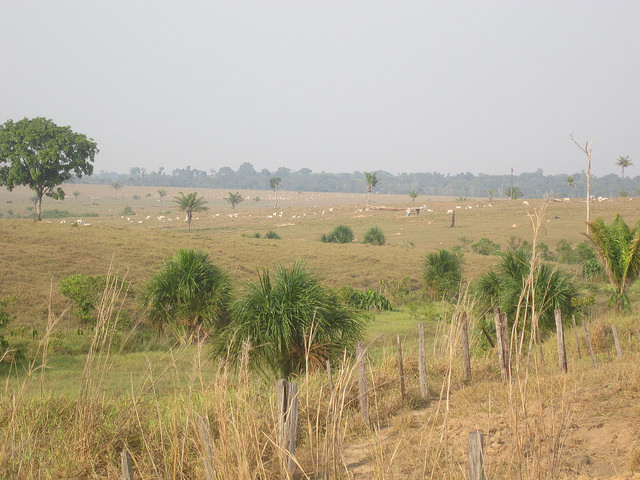 Deforestation due to the expansion of cattle ranches dominates the landscape in the vicinity of Alta Floresta, the city that is a southeastern gate to the Brazilian Amazon rainforest, and is also known as a center for ecotourism based on fishing and bird-watching. Credit: Mario Osava / IPS

They are currently struggling to obtain better conditions for the sector, such as a warehouse and a refrigerated truck that would allow them to ”collect” the fish from the widely spread members and sell them in the market.

One difficulty facing this colony is the dispersion of its members throughout 32 municipalities. The association at one point had 723 members, but now there are only 290, mainlyin the cities of Colider and Sinop, from which the nearby hydroelectric plants take their names.

Many have retired, others have given up. “We are an endangered species,” Duleba lamented to IPS.

The compensations offered by the hydroelectric companies for the damage caused do not include a focus on helping small-scale fisherpersons recover their livelihoods, as Duleba and other activists had hoped.

The headquarters of the Colony, which will be built by the Sinop Power Company, owner of the power plant of the same name, will be more of a tourist complex, with a restaurant, lookout, swimming pools and soccer field, on the river bank, 23 km from the city .

There will be a berth and an ice factory which could be useful for fishing, but not the fishing village, with its houses and infrastructure, which Duleba tried to negotiate.

In Colider, fisherpersons preferred compensation in cash, instead of collective projects, she lamented.

Northern Mato Grosso, where the land is the current source of local incomes and wealth, which is now based in agriculture, livestock farming and mining, after being based on timber, has now discovered the value of its water resources.