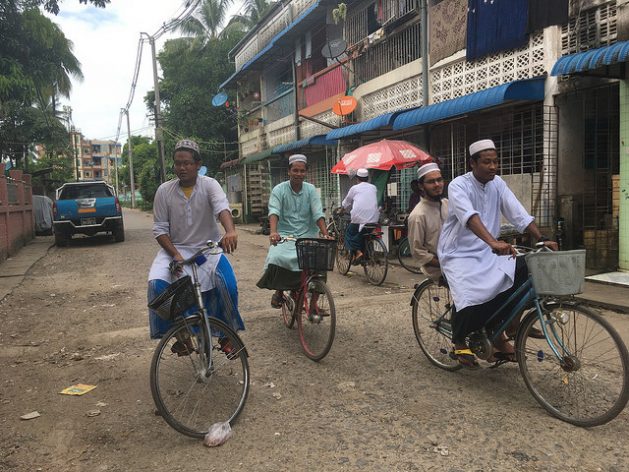 Muslims in the Thingangyun community of Yangon. They say extremist Buddhist monks sometimes try to provoke them by shouting nationalist slogans in their neighborhood. Credit: Pascal Laureyn/IPS

YANGON, Oct 25 2017 (IPS) - I try to hold on tight as my driver navigates his motorbike over a bumpy and muddy track. His helmet is decorated with a swastika and an eagle, part of an ill-inspired fashion trend called Nazi chic. It’s symbolic for a country where hate and racism seen to have become normalized.

For many years the Rohingya in Rakhine State have been suffering from state-sponsored discrimination and stigmatization. Today this hostility is spreading rapidly toward other Muslims in the country.

"We have the choice between a harmonious country and a failed state." --Tet Swei Win, director of the Centre for Youth and Social Harmony

We’re driving towards the outskirts of Dalla, a village on the Yangon River. I chose this place randomly, to sample the relations between Buddhists and Muslims. And it seems to go well.

“We don’t like what is happening in Rakhine. But here we have no problem with Muslims. There is mutual respect,” an elderly woman tells me. Most people I talk to confirm this.

A former soldier uses harsher language. “In Rakhine, Buddhists are being slaughtered. Muslims are burning down villages, cutting people’s throats and raping women. I don’t believe anymore that there is such a thing as a good Muslim.” His wife summarizes in her own fashion: “All Muslims must die.”

Because of disinformation, rumors and propaganda, these wrong ideas have penetrated all levels of society. Many people in Myanmar believe that all Rohingya are arsonists, rapists and murderers. As a result, they think that violence against them is acceptable. The fact that the Rohingya are not the instigators but the victims of an ethnic cleansing is being denied by many. 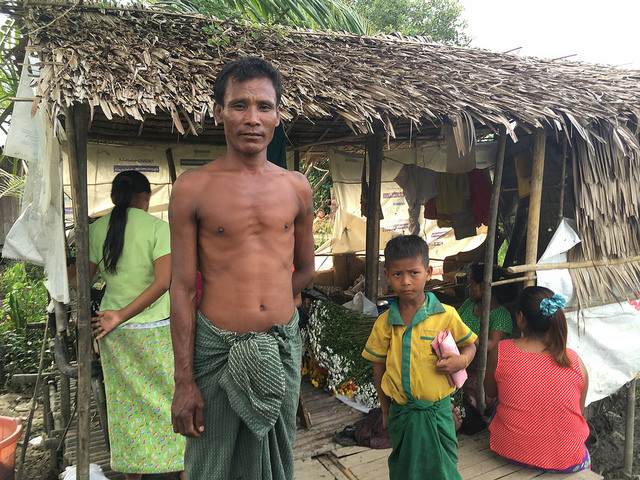 A former soldier in the Burmese village of Dalla who says he doesnʼt like Muslims because of what is happening in Rakhine State. Credit: Pascal Laureyn/IPS

The hatred towards the Rohingya is well known. But less documented is the spread of this hate towards other Muslims in Myanmar.

“Since the military coup in 1962, religion has been used to set up people against each other,” says U Aye Lwin, a Muslim and one the founders of the interreligious movement ‘Religions for Peace Myanmar’. I meet him in his mosque in Yangon. The building is well cared for but modest. Nothing would encourage visitors to suspect that it houses the tomb of Bahadur Shah Zafar, the last emperor of India.

“The dictatorial regime did not have the support of the population,” U Aye Lwin tells me. “So the army manipulated the Burmese sentiments of identity and religion. They told the Buddhist majority that the Muslims are a threat to their religion and country. That’s how Islamophobia has set in.”

The democratization of Myanmar did not change this. Hopes that Aung San Suu Kyi and the NLD would defend the minorities were soon dashed.

“When the NLD won the elections, it got even worse. Religion is now being used by the army to create instability. That’s how it clings to power,” the religious leader says.

The army wants to show it’s the only institution that can save Buddhist Myanmar. Aung San Suu Kyi is powerless, critics say, and her government has no control over the army. Moreover, she risks losing voters if she defends the Rohingya. 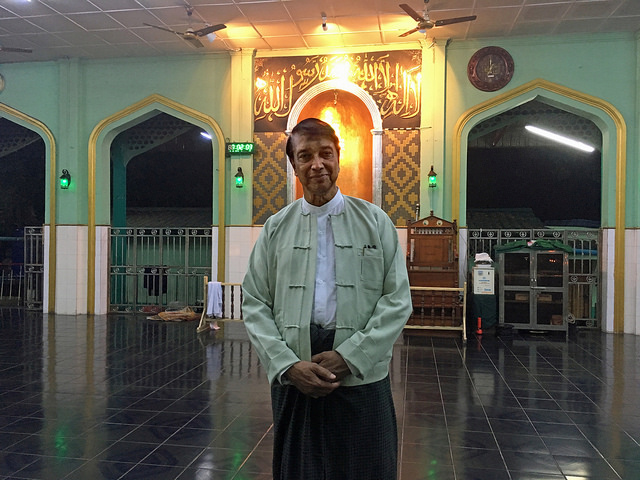 U Aye Lwin stands in Bahadur Shah Zafar Memorial Hall, which also functions
as a mosque, in Yangon. U Aye Lwin is a Muslim and one the founders of the
interreligious movement Religions for Peace Myanmar. Credit: Pascal Laureyn/IPS

“Buddha is not Burmese”

Kyaw Min Yu is an expert on prisons. He spent eight years behind bars after the student revolt of 1988. After a new uprising in 2007 he served five more years in detention. He is Rohingya and Muslim.

I meet the president in the small headquarters of his Democracy and Human Rights Party in Yangon. He walks with great difficulty, a consequence of his long periods of incarceration. “I used to believe in Aung San Suu Kyi. I worked for her. I protested for her. I have spent time in jail for her. But now I have had enough of her,” he says.

“Aung San Suu Kyi has become biased. She is using a language that doesn’t suit her function as the unofficial leader of the country. She speaks only for the Buddhist Bamar, the largest ethnic group of Myanmar.”

At the NLD, nobody wanted to talk to me. But I did get Htin Lin Oo on the phone. He is the former spokesperson for the NLD. He is Buddhist and defends religious tolerance. In December 2014 he dared to criticize the monks that spread hate: “Buddha is not Burmese. Burmese extreme nationalists should therefore not adhere to Buddhism if they wish to defend their own race.”

This provocation was answered by the military regime with two years of forced labor for insulting Buddhism. The party canceled his membership, under pressure from the monks who felt insulted.

But Htin Lin Oo is still optimistic. “Problems between migrants and natives will always exist. It does not stop our democratic development. Other countries had the same problems. The US fought a civil war. They still have problems with extremists.

“Therefore, the international community should not put us under pressure. They should help us. They should stop complaining about problems with the Bengali in Rakhine,” Htin Lin Oo says.

Although he preaches peace, he does refer to Rohingya as Bengali, illegal immigrants.

A gift from heaven

The international community produces statements but does not intervene. The United Nations is still investigating the events in Rakhine and still hasn’t decided whether the Rohingya are victims of a genocide or not. But it is a textbook example of an ethnic cleansing, says Zeid Ra’ad al-Hussein, the High Commissioner for Human Rights.

According to the International Organization for Migration (IOM), some 900,000 refugees are now being cared for by the Bangladesh government. Shelter is the most pressing priority, but many other critical needs must also be met, including protection, proper registration, food security, basic health services and water and basic sanitation facilities.

Speaking at an international pledging conference in Geneva this week, IOM Director General William Lacy Swing “[urged] international leaders to support the peaceful resolution of this decade long crisis in Myanmar and insist that the Myanmar authorities create conditions of safety, security and dignity in Rakhine state to one of the world’s most persecuted populations.”

On a local level, hundreds of activists are trying to avoid the contamination of violence from Rakhine State to the rest of the country. “All kinds of false rumors are being spread through social media. We are teaching people how to deal with one-sided information. It’s our way to prevent violence.”

Tet Swei Win is the director of the Centre for Youth and Social Harmony in Yangon. He takes me to Thingangyun, a predominantly Muslim district. Sometimes, extremist monks come to make mischief. “Those Buddhists come here with a hundred people to shout slogans. Then we have to react very quickly to prevent violence.”

When I step out of his little van in the contentious neighborhood, Tet Swei Win tells me not to mention to anyone that I am a journalist. That could create tensions. The peace is very fragile. He shows me the local school. According to the new manager it is full. “There is no place anymore for Muslim children. I try to fight this,” the activist tells me.

“Many people in Myanmar thought that democracy is something that falls from the sky. A gift from heaven. But they didn’t realize that democratization is a process. If you want democracy, you will have to work for it. The different religions will have to learn how to talk to each other. It could take decades before that problem is solved.”

Tet Swei Win thinks it could go either way. “We have the choice between a harmonious country and a failed state.”