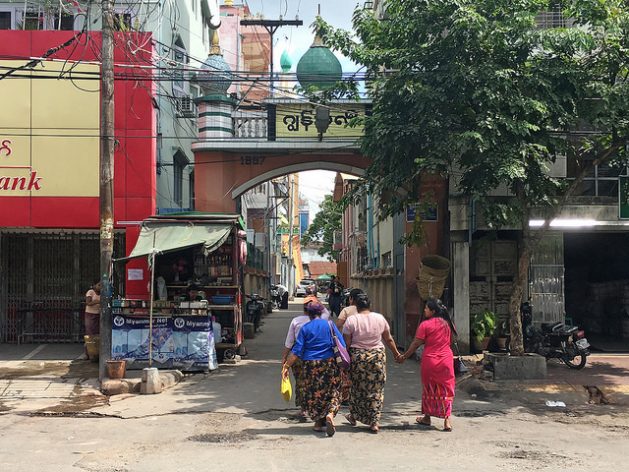 The entrance to the gated community of Joon, Myanmar. With tensions between Muslims and Buddhists rising, the gates are closed at night. Credit: Pascal Laureyn/IPS

YANGON, Oct 24 2017 (IPS) - In a quiet street, the sound of children’s voices can be heard from an open window. They are reciting verses of the Koran in unison. The small Islamic school lays hidden in a walled neighborhood where only Muslims live. This is an island of tranquility in Mandalay, the second-largest city of predominantly Buddhist Myanmar.

Calm seems to be the norm in the narrow streets leading to the Joon Mosque. But since a few years ago, the gates of this community have been locked at night. After centuries of peaceful coexistence, tensions between Muslims and Buddhists are building. Residents of the neighborhood don’t feel at ease anymore.

"Our shopkeepers are sometimes being harassed by monks. But when we call the police, they never show up." --U Wai Li Tin Aung

“Sometimes Buddhist monks try to intimidate us by shouting religious slogans. They call us ‘kalar’, an insulting word for Muslims,” says U Wai Li Tin Aung, secretary of the Joon Mosque, the biggest in Mandalay.

He thinks that the tensions are being provoked by the conflict in Rakhine State, in the west of Myanmar. There, the Rohingya – a Muslim minority group – is being persecuted and murdered by the military and by militias. Since August almost 600,000 Rohingya have fled to neighboring Bangladesh. The UN has labelled it ethnic cleansing.

The propaganda of the government and hostility of Buddhist nationalists are not exclusively reserved for the Rohingya in Rakhine. According to some Burmese, all Muslims are terrorists who want to take over the country. Since the gradual democratization of Myanmar, the authoritarian controls on media have disappeared, giving extremist ideas a free and unfiltered forum. In large parts of society, racism has become normalized. Many fear violence against Muslims has become acceptable.

U Wai Li Tin Aung is worried. “The government does nothing. Our shopkeepers are sometimes being harassed by monks. But when we call the police, they never show up. Laws are only in favor of Burmese Buddhists.”

It used to be different. The Muslim area around the Joon Mosque has a respectable history. Mindon Min, the penultimate king of Burma, gave this neighborhood to the Muslims in 1863. The monarch had founded the new capital in Mandalay and his administration was run mainly by Muslims. But that recognition seems to be forgotten, and now the inhabitants are victims of discrimination. 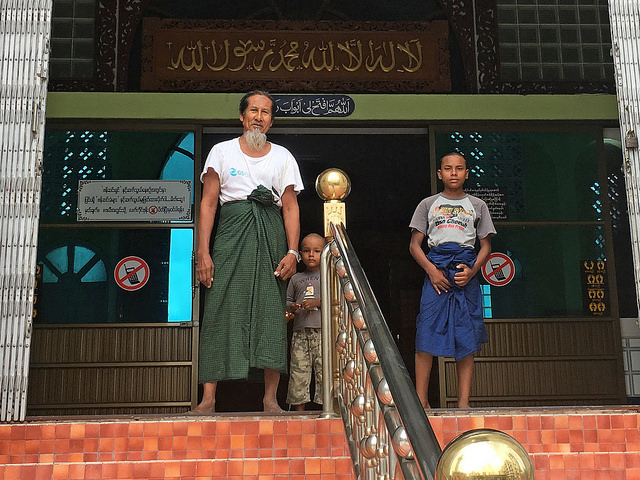 U Wai Li Tin Aung, secretary of the Joon Mosque, the biggest in Mandalay, Myanmar, stands on the entrance steps with two of his children. Credit: Pascal Laureyn/IPS

Pathe Aye Maung shows his identity card and the one of his son. Both are officially registered as Muslims. The ID card of the father says that he is a member of the Panthee, a recognized ethnic group in Myanmar. But the son is registered as an ‘Indian’, which means he is considered an illegal foreigner. “When my son went to complain about this, he was put in jail,” Maung says.

This is a problem that the Rohingya know all too well. They have been living in Rakhine for centuries, but they have been discriminated against since independence in 1948. The media and the government never use the word Rohingya. Naming them correctly would be interpreted as a recognition of their historical rights. Instead, most Burmese people consider them Bengali: illegal immigrants who should return home.

A large group of Buddhists feel that their culture and religion is being threatened by ‘foreigners’. They are afraid of so-called Islamification. They fear that Myanmar will evolve the same way as Indonesia, a Buddhist country that later became Islamic. So for many, all Muslims are viewed with suspicion. Some religious leaders have tried to turn these anxieties into violence against Muslims.

“We don’t let ourselves be provoked,” says secretary U Wai Li Tin Aung. “Whatever the extremist monks say, we stay calm and keep the peace. We have learned that from our religion. We don’t use violence.”

But that does not always work. In 2014 riots erupted in Mandalay, the bastion of Burmese Buddhist culture. The violence was ignited by false rumors of the rape of a Buddhist woman by a Muslim. Nationalist monks had spread these rumors with lightning-fast speed through social media. In the resulting street fighting, a Buddhist and a Muslim were killed.

During those tumultuous days, the police raided the Joon Mosque. They seized sticks, rods and marbles hidden in the prayer room. The secretary stresses that they were only to be used in case of an attack on the mosque. “Everybody was scared at that time. We couldn’t expect any protection from the army or the police.”

The violence placed Muslims and Buddhists in a polarized position, with simmering religious tensions and identity politics. And critics say the army and consecutive governments have used it to divert the attention away from their faltering policies.

The conflict with the ‘foreign jihadis’ signals to Myanmar’s citizens that the army is the only trustworthy protector of the country. It is a way to tighten the military’s grip on the economy, even after the rise of Aung San Suu Kyi and the NLD party. For the Muslims, the much-lauded democratization has not delivered much yet. For the first time in the history of independent Myanmar, there is no Muslim presence in parliament anymore.

Still, not everyone agrees with the extremists, and most Buddhists still get along nicely with their Muslim neighbors.

One Buddhist fruit vendor strolls through the Muslim neighborhood with her merchandise on her head. “It’s a pity that there’s a conflict going on. I have been coming here for years and I never had problems. Why should there be problems now? That’s bad for business.”

Meanwhile, the international donor community announced pledges on October 23 for more than 344 million dollars to address the mounting humanitarian crisis of Rohingya refugees in Bangladesh. The pledging conference in Geneva was co-organised by the International Organization for Migration (IOM), the UN Refugee Agency (UNHCR), the Office for the Coordination of Humanitarian Affairs (OCHA) and with Kuwait and the European Union as co-hosts. They noted that the ongoing exodus is the fastest growing refugee crisis in the world.

“Today’s pledges from the international community will help rebuild Rohingya refugees’ lives. Without these vital funds, humanitarians would not be able to continue providing protection and life-saving aid to one of the most vulnerable groups in the world. While we are thankful, I hope that the end of this conference does not mean the end of new funding commitments. We have not reached our target and each percentage point we are under means thousands without food, healthcare and shelter,” said William Lacy Swing, IOM Director General.