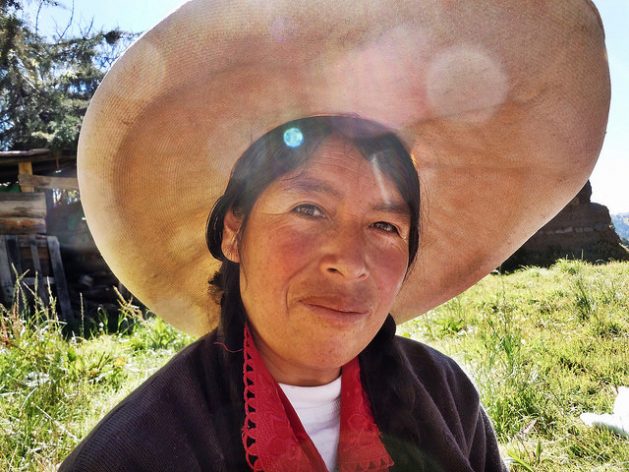 Celestina of Porcón Alto, a rural region high in the Andes, whose family has lived on the same plot of land for generations. Credit: Andrea Vale/IPS

PORCÓN, Peru, Oct 6 2017 (IPS) - Good healthcare can be hard to get – particularly when one lives on top of a mountain. The road to Porcón in the Cajamarca region of Peru, therefore, is as breathtaking as it is sobering. With every step further into its isolated natural beauty, a group of volunteers sent to deliver healthcare essentials are reminded how long the trek would be in an emergency.

After a bus has taken the volunteers as far as it can, to the rim of a sweeping valley dipping into the basin of a ring of mountains, they start their hike.

“We have a lot of fear,” Celestina says. “The doctors are always telling us that they’re going to help us and heal us, but we can’t always get to them and they’re not able to get to us."

It’s not very long mile-wise, but they stumble over unforgiving drops in a rocky wind that leads them through tilted pastures resting on the sides of the mountains. The looming brown stillness is disrupted by their panting, at a loss of breath from the gasping altitude.

At the end lies a community of artisans who live in close proximity to one another in Porcón Alto, a rural region high in the Andes.

They’ve been waiting. Once the volunteers arrive, several women filter out into the pasture where they’ve set up shop and sit cross-legged around them, all accompanied by toddlers clutching at their long skirts and babies peeking out of the tops of the shawls slung over their backs to carry infants, or vegetables.

They have a flood of questions ready, about basic nutrition, exercise, disease prevention. They have a waiting list of ailments to look at – my child has this rash. My child can’t say his R’s. It hurts when I stand up from bed.

Immediately put to work, volunteers begin taking their blood pressure, weighing them, measuring their heart rates and their blood glucose levels. Under the shadow cast by one woman’s tall brimmed hat her skin is wrinkled in layers, leathery and toughened from years of work in the sun. She looks anywhere between 40 and 60, balancing a squirming toddler in her lap while she squints at the volunteer helping her with rapt attention and concern. But a glance at her chart reveals that she is only 22.

One woman sits in the center of the others, shucking corn with a baby tied to her back. Her eyes crinkle with smile lines and her elements-exposed skin is a mosaic of black freckles and brown creases. Her name is Celestina.

Porcón is home to her in a deep sense – her family has lived on this exact plot of land for generations.

“The house over there was taken down, but that’s where my grandmother and her mother lived,” she says in Spanish, gesturing out towards a rolling plot of land.

As to what life has been like, living high up here: “Sometimes it’s good, sometimes it’s bad. Sometimes I get worried. My daughter is sick right now, so I’m sad right now,” Celestina says, touching her daughter’s face as the baby girl plays in her lap. Baby Analee, she says, was bit by an insect just this morning. Analee’s cheek is already massively swollen with a red welt.

Fearing for her daughter is a constant reality of existence for Celestina.

“When I’m sleeping I can forget, but otherwise there’s always that worry for my child,” she says. “She needs to go to school, she needs to work, and I’m always worried about her, to know that she’ll be okay.”

Despite how long her family has lived on this land, Celestina says without a hint of hesitation that she wishes Analee could grow up in an urban area, perhaps the city Cajamarca below.

“Of course I want to live out in the city, but we don’t have land. Where would we build a house? Here, being out in the country, we just cook, we clean, we try to bathe, and we wait. All we can do is wait for the proper transportation to get to Cajamarca to try to get the proper attention if someone is sick.”

She says that there are no home remedies that she or anyone in the community uses to try to treat illness. Their best defense is simply the best level of hygiene they can achieve, and oftentimes it isn’t enough.

Celestina is 38 years old. She has the health of a 60-year-old. Plagued with health struggles since childhood, she currently suffers from chronic eyesight and stomach trouble.

But she brushes this acknowledgement off and automatically returns her attention to her baby.

“My daughter is sick and I am worried,” she says. “Always, I am scared for her.”

Celestina may worry about emergency illness striking, but what her and the other community members don’t realize is that the real threat of living in such isolation is not one-time tragedies, but rather chronic health problems. Of the children screened in Porcón, one-fourth were underweight and one-fourth were either at risk of being overweight or actually overweight. Of the adults screened, 33% were obese and 42% were overweight.

Most of the people examined during the health screenings, both in Porcón and across Cajamarca, had hypertension and were overweight. An inordinate number had diabetes and were completely unaware of it, ignorant to what caused the disease. One woman’s blood glucose level was close to 230 – the volunteer who tested her was so shocked that she tested the level twice more, sure that that initial reading couldn’t be possible.

Uneducated on signs of cancer and prevention techniques, many have had parents and grandparents pass away from the disease and simply chalked it up to having ‘just died,’ without a known cause.

According to the World Health Organization, the current national Human Resources for Health Density in Peru – meaning doctors, nurses and midwives – is 17.8 per 10,000 population. That distribution, however, is extremely inequitable, with rural areas usually having an HRH density of below ten. Lima, for instance, has three times more physicians per population – 15.4 – than Huancavelica, one of the poorest cities in Peru and populated in majority by indigenous peoples. 89.1% of births in urban regions are assisted by a professional – while only 42.9% of births in rural areas are.

Consequently, it’s perhaps not surprising that child mortality rates in Peruvian rural areas are almost twice that of urban areas – 40% to 26%.  According to the Pan American Health Organization, 35.3% of adults in rural areas of Peru are overweight, and 16.5% are obese. Only 40% of them perform any “moderate physical activity” – all of the health screenings concluded with group exercise classes.

Without doctors nearby, without easy and reliable transportation to get to the closest doctors, and without health education, Celestina has to live in constant fear. There is fear for her neighbors and for herself – but above all, fear for her baby. There is fear that disease will strike, that accidents will happen, that unexplained illness will come. Because when it does, Celestina and the rest of the community are left alone on top of the Andes with only their best abilities as a defense – uneducated, unequipped and without adequate and reliable transportation.

For now, all that Celestina and the rest of Porcón can do is wait.