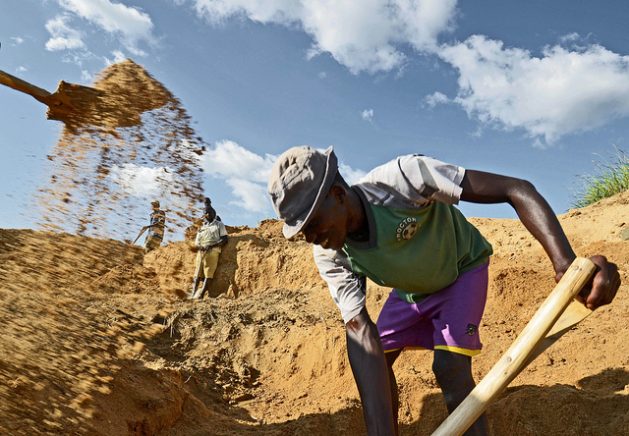 UNITED NATIONS, Feb 27 2018 (IPS) - How many people know where their gold and diamond jewelry comes from?

How many people consider the human cost of its production?

Not many consumers ask these questions, and, shockingly, neither do many of the world’s leading jewelry brands.

It’s a trend that Human Rights Watch (HRW) is trying to change with a new social media campaign, #BehindTheBling.

“We want people to think about where their jewelry comes from,” Jo Becker, Advocacy Director of the Children’s Rights Division at HRW, told IPS.

“Importantly, we want people to tell the brands that. We want them to write, to tweet, to call the big companies to put pressure on them to guarantee that their gold and diamonds are not coming from places that are committing human rights abuses,” she said.

Whilst the campaign has been running for over a year, it was earlier this month that HRW introduced the hashtag “Behind the Bling”.

“When we started the campaign before, the big brands in jewelry told us that [responsible sourcing] was not something that consumers cared about. We wanted to show them otherwise,” Becker said.

At the time of writing, #BehindtheBling has been used on twitter over 20,000 times since its launch.

Additionally, more than 6,000 letters asking for full disclosure on sourcing practices have been sent to jewelry companies from the general public.

Knowing which companies to target was made easier thanks to HRW, who released their in-house assessment of the sourcing practices of 13 major jewelry and watch brands.

HRW compared the gold and diamond sourcing practices of the brands and ranked them according to specific criteria, including efforts to assess and respond to human rights risks, establish traceability, and publicly report the company’s actions.

The results showed that whilst some companies have taken considerable steps to address human rights risks in the gold and diamond supply chain, others have not.

HRW found that a majority of the companies do not have full traceability for their gold and diamonds, and do not assess human rights risks, with many not even providing the names of their suppliers.

Tellingly, none of the companies ranked as “excellent”.

HRW estimate that there are millions of people working in small-scale, artisanal gold and gem mines. They say that in many cases the men, women and children working in them are subject to human rights abuses.

“There’s little to no pay, horrendous conditions, child labour is frequent…there is nothing glamorous about the gold and diamonds that are sourced like that,” Becker said.

The latest statistics from HRW puts the number of children working in mining at over 1 million globally with a majority working in gold and gem mining.

Many of the nations that have extensive documentation of child labour are concentrated in West and Central Africa.

For instance, in Sierra Leone thousands of boys and young men work as diamond miners where they are provided free housing, food and work tools, in return for their labour.

Reports are similar in the Ivory Coast where children have been reportedly trafficked from neighboring Burkina Faso to work in artisanal gold mines. The HRW report on their plight described their living conditions as “slave like”.

Farai Maguwu is man who does not have to read about child abuses in African gold mines. As the executive director for Zimbabwe’s Centre for Natural Resources Governance, he has witnessed first-hand the horrors that some children have endured.

Talking to IPS, Maguwu described a “mounting problem for Zimbabwe” of children engaging in artisanal mining in “deadly” conditions and often abandoning education in order to do so.

“I remember in 2012 I saw three young men who had returned from Marange diamond fields. They told me they were panning diamonds when a tunnel collapsed and killed their friend,” he recalled.

“It’s not uncommon that type of story and the image of those boys will haunt me as long as I live.”

But the plight of child mining isn’t just a scourge in Africa.

In Myanmar, international trade sanctions were put on the sale of their rubies and gems after reports that their mining industry relied on forced, child and trafficked labour. Reports of industry abuses continue.

Similarly, HRW is concerned about the working conditions in India, where much of the world’s jewelry undergoes the refining processes of being cut and polished.

HRW believe thousands of children could be working further along the supply chain there with many facing unfavourable conditions.

“We need to look at the whole supply chain and make sure it’s clean – we need consumers to make it clear to the companies that it’s non-negotiable,” Becker said.

Becker says the campaign has already resulted in positive outcomes. For instance, German jeweler Christ recently agreed to work with HRW to make sure its responsibly sourcing.

“We’ve made it clear to all of them that we will continue to be checking in and holding them accountable for their sourcing. Consumers need to also,” she concluded.