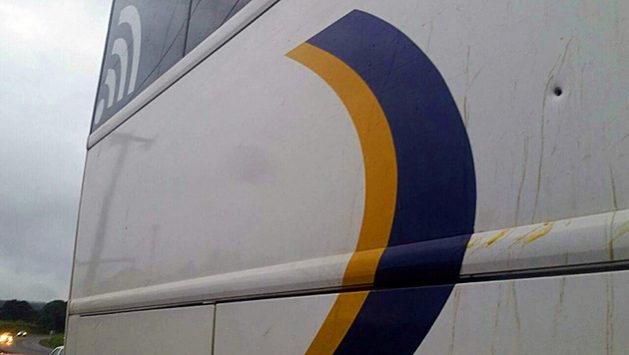 A bullet hole (right), in one of the buses hit on Mar. 27 by gunfire during a caravan for former President Luiz Inácio Lula da Silva’s campaign tour to the south of Brazil, in the tense days before his imprisonment on corruption charges. The caravan suffered attacks and harassment along its journey. Credit: AGPT / Public Photos

RÍO DE JANEIRO, Apr 14 2018 (IPS) - Gunshots, eggs and stones thrown, blocked roads and other forms of aggression against politicians and journalists in recent weeks generated fears that the violence will increase the uncertainty over the October elections in Brazil.

Before going to prison, former President Luiz Inácio Lula da Silva was the main target, during the caravan he led through the country’s three southern states, which suffered attacks from adversaries that culminated in gunshots against two buses on Mar. 27, without any injuries.

On the other hand, the demonstrations in support of Lula in the days before he began serving his 12-year sentence on Apr. 7 targeted journalists.

"The main source of aggressions against journalists since 2013 has been the State, its security forces, as well as the judiciary, with actions that restrict freedom of the press." -- Maria José Braga

In the space of a few days there were “17 cases of attacks, intimidation and curtailment of professional activity,” said the Brazilian Press Association (ABI), in an official note of protest.

The threat to freedom of expression affects journalists and politicians alike, victims of harassment in the months leading up to the official start in August of the electoral campaign for the presidential, parliamentary and regional elections.

“The tendency seen in recent years has been a reduction in violence against journalists,” acknowledged Maria José Braga, president of Brazil’s National Federation of Journalists (Fenaj).

In 2017, there were 99 cases of attacks against journalists, 38.5 percent less than in 2016, when there were 161 acts of violence, according to Fenaj’s annual report on violence against reporters.

In fact, the violence had returned to the levels seen before 2013, when the figure had climbed to 181 attacks, against 81 in the previous year. The outbreak that year coincided with massive protests, throughout the country, against poor urban public services, which turned violent towards the end.

“In 2018 we have a different political scenario, with the country in a de facto state of emergency, in which the judicial branch and part of the media have been taking part, and this may result in an increase in attacks against journalists,” Braga told IPS.

The president of Fenaj shares the view of much of the left, especially of the Workers Party (PT), founded by Lula, and which ruled the country between 2003 and 2016, that the removal of former president Dilma Rousseff two years ago amounted to a coup d’état, with the complicity of judges and the major media outlets.

“Since then, institutions and the rule of law have been subject to threats, including freedom of expression, social movements, society in general, and that is a factor leading to more violence,” said the journalist.

“The main source of aggressions against journalists since 2013 has been the State, its security forces, as well as the judiciary, with actions that restrict freedom of the press,” she said. A “democratic vigil” held Apr. 11 by supporters of former President Luiz Inacio Lula da Silva, near the headquarters of the federal police where he has been imprisoned since Apr. 7, in the southern Brazilian city of Curitiba. Some journalists who covered events in defense of the leftist leader, who was sentenced to 12 years in prison on corruption charges, have been victims of assaults. Credit: Ricardo Stuckert / Public Photos

For years, the police have been the main perpetrator of such violence, accounting for 19.2 percent of the total, Fenaj’s 2017 report says.

The second group of perpetrators of aggression are politicians, sometimes through their aides, and the third are judicial authorities, who use their power to restrict freedom of the press.

“We are now, six months before the elections, at the height of political tension,” which increases the abuses, violence and fears, said Fatima Pacheco Jordão, a sociologist who specialises in public opinion.

“The strong polarisation between the left and the right, aggravated by the great unpopularity of the government of President Michel Temer and the uncertainty with respect to the elections, accentuate the pessimism, but once it is clear who the candidates will be, and the electoral process is on track, the tension and violence will decrease,” Jordão told IPS.

In general terms, “elections contribute to freedom of expression, and reduce censorship in newspapers and newscasts,” she said. But when this is not the case, what happens is that the violence is accentuated and this can prevent the elections themselves, “which is worse for everyone,” she said.

The absence of Lula, who has become legally ineligible after his conviction was upheld on appeal, “reduces the polarisation since he exited the electoral battle at a moment of decline (of his leading role on the political scene), as his PT has been losing electoral strength for years,” she argued.

Supporters of Lula as candidate to president – about 35 percent of respondents according to the polls – “will be divided between several possible candidates, not just from the left,” when it is confirmed that the former president is out of the race, said the sociologist.

For Jordão, this confirms that Lula’s popularity is due more to his personal leadership than to a leftist idea or programme, since he is the poll favorite.

In addition, society in this country of 208 million people has shifted toward more conservative positions, as evidenced by the fact that 60 percent did not approve progressive ideas in recent polls, she said.

A change that, in her opinion, “seems natural in rich countries, such as in Europe, but not in Brazil, where we have so much inequality, violence against women and violations of rights, where the voice of society is outside the parties, which do not address their most pressing demands.”

Violence against politicians and journalists sometimes becomes lethal. One victim who shook the country was Marielle Franco, a city councilor for the leftist Socialism and Freedom Party in Rio de Janeiro, who was shot dead on Mar. 14, near the center of the city.

The apparent motive was her denunciation of crimes committed by police against poor Rio communities, although the investigations have not made progress in clarifying the murder of the emerging political leader.

“Violence tends to happen more in municipal elections than in national or state elections,” said Felipe Borba, who teaches politics at the Federal University of the State of Rio de Janeiro and is the author of a study that identified 79 candidates killed in Brazil from 1998 to 2016.

Of them, a majority of 63 were running for the municipal councils in small cities.

This year’s elections should be less violent because the heads of the executive and legislative branches are chosen at a national and state level, but the situation “is unpredictable, given the polarisation between ideologically opposed currents, which fosters violence,” he told IPS.

“It will depend on the attitude of the more radical candidates, who can fuel animosities,” said Borba, mentioning the case of Jair Bolsonaro, a far-right candidate who ranks second in the polls, where Lula is still favorite even after being imprisoned.

Bolsonaro is a retired army captain who openly defends the 1964-1985 military dictatorship, including its torturers.

That freedom of expression is often a victim of electoral violence, as well as of police repression against political demonstrations, is reflected by the notable increase in attacks suffered by journalists in 2013 and 2016, years of massive street protests in Brazil.