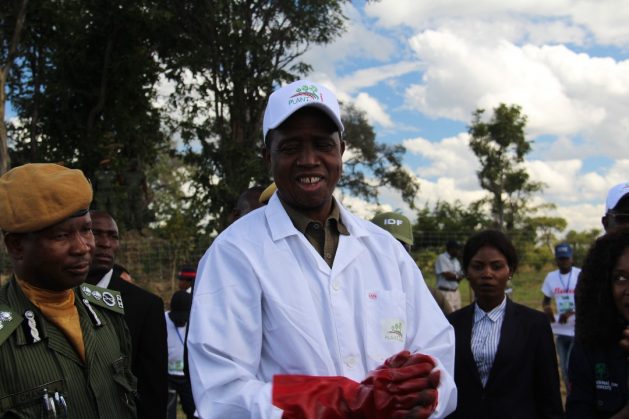 CHINSALI, Zambia, May 3 2018 (IPS) - As global climate experts meet in Bonn this week to discuss how to take climate action forward, Zambia counts itself amongst the leaders as President Edgar Lungu officially launches the Plant a Million (PAM) trees Initiative.

In fact, the initiative is even more ambitious than its name implies, and aims at planting at least two billion trees by 2021. According to President Lungu, the initiative is in line with the country’s Seventh National Development Plan whose aim is to diversify the economy from copper dependency.

President Lungu says the initiative, which targets young people through schools, colleges and universities, will be used as a vehicle for mindset change among Zambians to begin to value the importance of planting trees as a tool for economic diversification.

“This initiative marks the beginning of growing money through trees and government stands ready to support it and ensure that it succeeds,” he said during the launch at Kapasa Makasa University in Muchinga Province, Northern Zambia.

In line with the country’s commitments to international treaties, especially the landmark Paris Agreement on Climate Change, President Lungu said government envisages not only creating a tree-based economy, but also mitigating climate change through the initiative.

He is particularly concerned with the country’s alarming deforestation rate of 276,021 hectares per year, making Zambia one of the most deforested countries in Africa.

“The Plant A Million initiative will significantly contribute to reducing deforestation which has earned Zambia a bad name of being one of the most deforested countries in Africa as a result of uncontrolled harvesting of trees,” he said.

The Zambian president added that he was impressed with the youth involvement model through schools, colleges and universities, saying it will help push the agenda of mindset change because “when our learners appreciate the importance of trees, it will in turn create a positive impact in families and the communities at large.” Speaking earlier, Higher Education Minister Nkandu Luo said her Ministry would use the initiative to redefine the education system from exam-based to real-world practices.

“Over the years, the thinking in our school system has been that education is passing exams but we are redefining this thinking, so that people know that education is total transformation of a human being, and this programme is one of the ways to do it,” she said.

As one of the brains behind the initiative, Professor Luo said that Zambia was aiming to break the world record of planting the most trees, which is currently held by India. Last year, Volunteers in India planted more than 66 million trees in just 12 hours in a record-breaking environmental drive.

About 1.5 million people were involved in the huge campaign, in which saplings were placed along the Narmada river in the state of Madhya Pradesh throughout Sunday.

India committed under the Paris Agreement to increasing its forests by five million hectares before 2030 to combat climate change.

“We are aiming to beat the world record, to go above 66 million trees done by India. We aim to plant at least a billion trees by 2019, and another billion plus by 2021; and I am positive that with universities’ involvement, it is doable,” she said.

Meanwhile, Minister of Lands and Natural Resources Jean Kapata is optimistic that the initiative will not only add value to people’s livelihoods through income from the sale of fruit and other forest products, but also contribute to the country’s ambitious mitigation targets as set in the Nationally Determined Contributions (NDC).

“As you may be aware, tree planting plays an important role in addressing impacts of climate change, and mitigating effects of climate change. In this regard, the Zambia Plant A Million initiative is also responding to national efforts of reducing greenhouse gas emissions,” she said.

Zambia has undertaken, and is still implementing, several tree planting and preservation projects across the country. Central to such initiatives has been the goodwill of the country’s first president, Dr. Kenneth Kaunda, who was a pioneer of tree planting during his time in office.

And according to Emmanuel Chibesakunda, PAM initiator and project manager, the initiative wants to build on this foresight and activism of the 94-year-old freedom fighter and founding father of the nation.

“I am pleased to announce this morning that Dr. Kenneth Kaunda has kindly agreed to be the goodwill ambassador for this initiative,” announced Chibesakunda amid thunderous applause from those who gathered to witness the ceremony in a district which is also home to Dr. Kaunda. “Dr. Kaunda did not only lead our country into independence, but also pioneered tree planting in Zambia.”

Chibesakunda shared his inspiration for the initiative, which he said was from his father who taught him that talent was like a seed which needed to be planted in the right soil to germinate into beautiful fruit. This led to his passion for trees, and especially the involvement of children and young people.

“My father told me that we all have talents, but what matters is where we plant them,” he told the gathering. “And my desire for this project is that we plant the knowledge in the young generation, let us put the future into their hands.”

So far, tree nurseries have been set up at 12 schools in Lusaka, and the project expects to reach 720 schools in the next two years in 60 districts across the country.