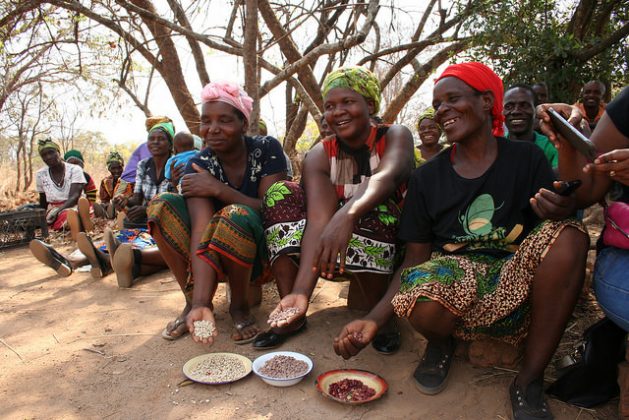 BRUSSELS, Jun 8 2018 (IPS) - Lawmakers at the highest levels urgently need a “revolution in thinking” to tackle the twin problem of sustainable food production and migration. Starting with an inaugural event in Brussels, then travelling on to New York and Milan, an international team of experts led by the Barilla Center for Food and Nutrition (BCFN) is urging far-reaching reforms in agricultural and migration policy on an international scale.

“We should be scared about the situation that is in front of us, but we should also be fascinated by the solution,” Paolo Barilla, BCFN Vice Chairman, said at the start of the first International Forum on Food and Nutrition which took place June 6 in Brussels.

"As we see it right now, there is no strategy at all at governmental levels in the EU to deal with migration, let alone how food policy might help.” --Lucio Caracciolo

Barilla and several experts speaking at the event pointed out the many problems lying ahead involving world-wide sustainable food production.

“One third of all food worldwide is thrown away, nearly one billion people go to sleep hungry every night and in the meantime, 650 million are obese. We urgently need new comprehensive, multi-stakeholder food systems to fix this situation,” said Andrea Renda, Senior Research Fellow at the Centre for European Policy Studies, organizer of the event together with BCFN and the United Nations Sustainable Solutions Network (UN SDSN).

“In thirty years we will need to feed nine billion people. But at the same time, because of climate change the arable land is diminishing. The Sahara desert has increased ten percent in size the last decade and the South of Italy and Spain are drying up. How will we feed everyone?” asked Lucio Caracciolo, geostrategist and President of research company MacroGeo.

Moreover, they called upon the EU to change the focus of its agricultural policies from simply increasing production to focusing on new systems that assure healthy, nutritious, affordable diets for everyone. Instead of a “Common Agricultural Policy,” the EU should shift to a “Agri-Food Policy.”

“In the current EU Common Agricultural Policy, two-thirds of the subsidies have nothing to do with sustainable development,” Andrea Renda tells IPS, “and one third is spent on innovation in agriculture, in a broader, more holistic approach. This must at least be reversed.”

The authors state that there is a particularly strong link between migration, food and conflicts. “Refugee outflows per 1000 population increase by 0.4 percent for each additional year of conflict and by 1.9 percent for each percentage increase of food insecurity,” the MacroGeo authors write, referring to recent research by the World Food Program.

“That might not seem a lot but in a country of fifty million that amounts to one million refugees per year,” said Valerie Guarnieri, assistant executive director of the World Food Program who repeated the statistics in front of the audience of 600 attendees on Wednesday.

“The connection between migration and food is heavily neglected in policy, this is a way to push it into the agenda,” Lucio Caracciolo told IPS, “because as we see it right now, there is no strategy at all at governmental levels in the EU to deal with migration, let alone how food policy might help.”

The contentious matter of dumping of European surplus produce – often named as one of the causes of hunger, food insecurity and migration – in Africa was accordingly dealt with in a talk with EU Commissioner for Agriculture Phil Hogan, not coincidentally just ahead of long-awaited negotiations on the reform of the EU’s agricultural policy. The Commissioner pledged that the new Common Agriculture Policy 2021-2027 program will reduce spending on production of commodities often dumped in the developing world. At the same time, he said Europe was ending trade barriers on imports of food from the developing world.

As part of its ambitious list of policy recommendations, BCFN also calls for more awareness of the illegal exploitation of migrants in EU agriculture. According to the experts, specific EU programmes should provide funding for the fight against unethical practices. And spreading a message which does not go well with the current Italian government, MacroGeo’s Lucio Caraciolo called for a “normalisation of the presence of migrant labour. European agriculture in the South cannot survive without their help. So it is up to us to assure that their rights are respected,” he told IPS.

In its report, MacroGeo proposes a circular and seasonal migration model, in which temporary workers are contacted directly from their country of origin on a yearly basis and for determined periods. The workers are granted permits and ensured that they can return to their home country. “Intended results include disincentivizing unregulated economic migration, ensuring employees are granted work conditions as per the law, and the possibility to return to the same farms, enhancing human resources effectiveness,” the report says.

Bob Geldof, musician, activist and organizer of 1984’s Live Aid. closed the event with an at times bitter speech broadening the discussion. “We had a 1200 percent increase in consumption in the last eighty years and we’re talking about sustainability?” he asked. “Sustainability is simply impossible with this irrational economic logic, which boils down to ‘more for ourselves all the time.’”

In September, the International Forum will travel to New York to coincide with the United Nations General Assembly. In November, it will hold a third and final event in Milan.