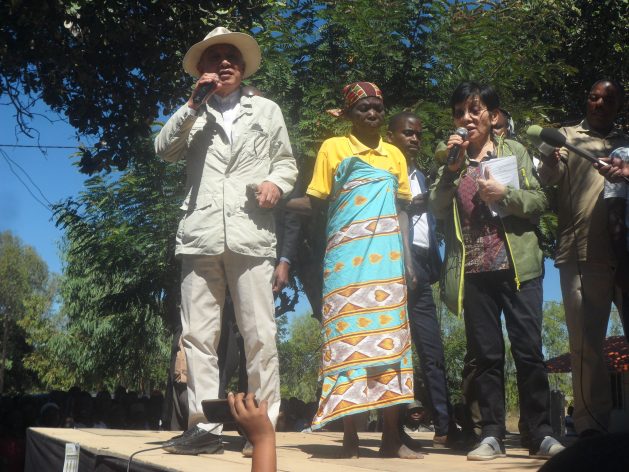 World Health Organization goodwill ambassador for Leprosy Elimination and chair of the Nippon Foundation, Yohei Sasakawa (left), holds the hand of a leprosy patient. Sasakawa visited Mozambique’s rural Namaita Centre to assess the progress of leprosy patients. The Nippon Foundation has been providing funds and medication in order to eliminate leprosy in Mozambique. Credit: Elísio Muchanga/IPS

NAMPULA PROVINCE, Mozambique, Jul 28 2018 (IPS) - It takes Faurito António, 42, from Lalaua district, Nampula Province, two hours to reach his nearest health centre in order to receive the drugs necessary for his treatment of leprosy. António, whose foot has become affected by the muscle weakness that occurs when leprosy goes untreated, says this long walk while ill is the reason why many don’t continue treatment – which can take between six to 12 months.

“There are people who drop out of treatment for alleged fatigue from going long distances to gain access to a hospital,” he tells IPS of the rural distribution of Mozambique’s health centres.

In the deeply rural and poor northern province of Nampula, some six million people, according to the Mozambique ministry of health, are serviced by one health centre in each of the 23 districts.

The lack of development—many of the villages in the region do not have electricity or even paved roads—also often makes these centres difficult to access.

This southern African nation was in a 16-year civil war that ended in 1992 and ranks 181 out of 188 countries on the United Nations Development Programme’s Human Development Index, sharing its place with conflict-ridden South Sudan. World Bank data shows that more than half, 63 percent, live below the poverty line of USD1.90 a day.

A source in the health ministry says that on average, about 5,000 people are treated in Nampula’s health centers, leaving the remaining population without access.

Nampula Province was ranked in a study as one of the areas with the highest number of villages located 60 minutes away from a health centre. The province’s main 500-bed Nampula Central Hospital, in Nampula City, serves a population of approximately 8.5 million from the three provinces of Nampula, Cabo Delgado and Niassa.

This province has the most cases of leprosy in the country. In the first half of this year, the ministry of health registered a total of 553 cases, most of them from the districts of Lalaua, Meconta, Mogovolas and Nampula, in Nampula Province. This was followed by Zambezia and Cabo Delgado with 121 and 84 new cases respectively.

Leprosy is a chronic disease. Initial symptoms are patches of skin that are paler than normal, and this makes the disease difficult to diagnose. But if left untreated, the World Health Organization (WHO) says it “can cause progressive and permanent damage to the skin, nerves, limbs, and eyes.”

Last year, Mozambique’s national director of public health, Francisco Mbofana, raised concern that the disease was still going undiagnosed and untreated. Club Mozambique quoted him as saying that often patients appeared for the first time at health centres already suffering from second degree malformations “where mutilations of their fingers and toes are evident.”

The disease, which is transmitted via droplets, from the nose and mouth, during close and frequent contact with untreated cases, is curable with multidrug therapy (MDT), and early treatment averts most disabilities. The WHO has provided MDT for free since 1995 thanks to intial funding from the Nippon Foundation. The Nippon Foundation, a non-profit philanthropic organisation from Japan, is active in many countries across the globe in eliminating leprosy, including here in Mozambique.

The MDT treatment that António is on was donated by the Nippon Foundation and is available for free for all leprosy patients across the country.

António has been on the therapy for two weeks now, and says that he can report an improvement. 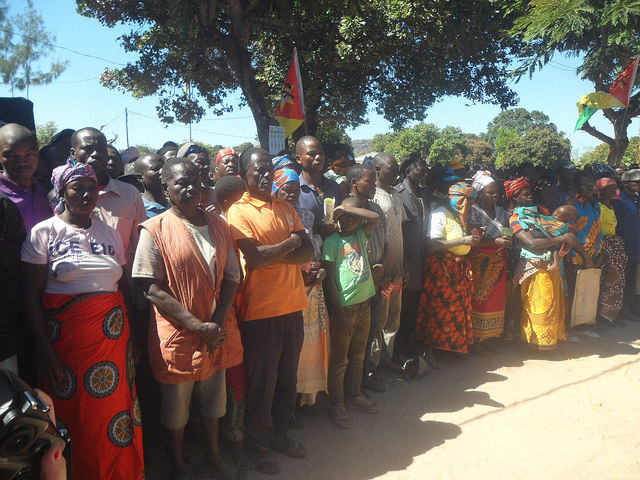 A community in Mozambique’s Nampula Province listen to a talk about identifying and treating leprosy. This province has the most cases of leprosy in the country. In the first half of this year, the ministry of health registered a total of 553 cases, most of them from the districts of Lalaua, Meconta, Mogovolas and Nampula, in Nampula Province.Credit: Elisio Muchanga/IPS

Promoting early identification of the disease through education

Unlike António, Ermelinda Muelete, 23, was fortunate enough to have been diagnosed early on when white patches appeared on her body. But Muelete, who had been on medication for the disease for some weeks, stopped the treatment because she felt that the patches on her skin were not going away quickly enough.

But she regrets the decision.

“I want to return to the treatment,” she tells IPS from the Namaita Centre, a small clinic in Mozambique’s district of Rapale, Nampula province. Muelete says that while members of the small rural community here have not rejected her outright, she felt that some of their attitudes and actions discriminated against her.

But this Thursday Jul. 26, as a small rally was held in the area to sensitise people about the disease, she felt more confident.

The WHO goodwill ambassador for Leprosy Elimination, Yohei Sasakawa, visited Namaita Centre to evaluate how funding from the Nippon Foundation, of which he is chair, has been able to assist treating Mozambicans with leprosy.

The foundation has been on the forefront of combatting the disease. In 2013, along with WHO, Nippon Foundation held a leprosy summit during which 17 countries that reported more than 1,000 new cases a year issued the Bangkok Declaration to reaffirm their commitment to achieve a leprosy-free world.

Here in Mozambique, the foundation has provided both funds and medication to the health ministry to implement post-elimination interventions at community level in the endemic districts of the central and northern parts of the country, especially for the active search for patients for early diagnosis and treatment. The Nippon Foundation initiative, which began last year, will continue until 2020.

According to Sasakawa, the process of diagnosis of this disease has been difficult, because the symptoms can take a significant time to present and they are not specifically painful. This long incubation period, on average five years, but in some cases up to 20 years according to WHO, means that people don’t always seek treatment immediately.

However, he challenged communities to be vigilant, and to try to identify if their relatives have any skin discoloration so that they can be referred to a hospital for screening and treatment.

“In fact, the appearance of white patches on the patient’s body is one of the main forms of suspicion that may lead to a specific diagnosis to determine the disease,” he says.

“Do not take long with symptoms of leprosy you have to see a doctor in the nearest health centre to get treatment, which is free.”

In addition to providing money and MDT, Nippon Foundation also support public awareness campaigns that sensitise local populations about leprosy, how to identify it and where to receive treatment.

In rural areas, poor understanding of the disease makes it difficult for people to identify it and obtain necessary treatment. Only nine percent of the country’s 28 million people have internet access, according to the World Bank data.

So the education rally made a difference to Muelete.

“Now I don’t feel rejected because of my situation. I feel strong to overcome discrimination and go ahead with the treatment,” she says.

The struggle to eliminate leprosy

Sasakawa says that Nippon Foundation has been struggling to eliminate the disease. There over 210,000 new leprosy cases registered globally in 2016, according to official WHO figures from 145 countries.

Mozambique had been declared free from leprosy in 2008. However, a few years later, it experienced an outbreak of the disease.

The country’s health minister Nazira Abdula, says that just in the first six months of this year, Mozambique registered about 951 new cases of leprosy, compared to 684 cases in 2017.

“The cases may increase, but mini-campaigns are foreseen in the provinces that register some cases of leprosy,” she says from her office in Maputo as she received the foundation delegation.

Manuel Dias, a community leader in Namaíta reiterated the request for support to combat leprosy.

“We ask Mr. Sasakawa to continue bringing the leprosy drug here in Namaíta, because there are many people suffering from this disease.”

Sasakawa reaffirmed his commitment to continue supporting communities with a view to eradicating the disease, particularly in rural areas.