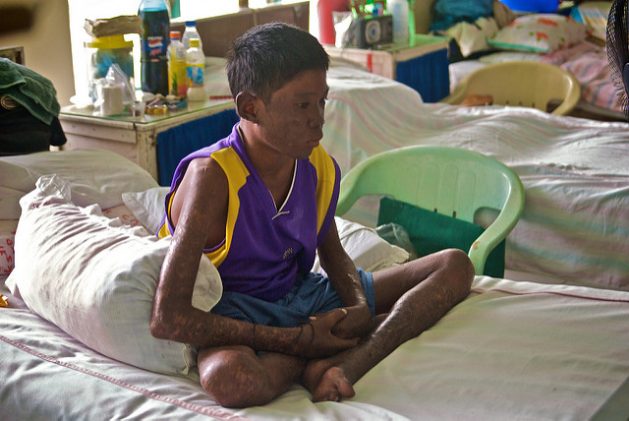 A young boy from the Philippines with leprosy. The chronic disease is curable, and if treated in time disabilities related to the disease can be averted. Courtesy: moyerphotos/CC By 2.0

MAPUTO, Jul 30 2018 (IPS) - In the first six months of this year, the southern African nation of Mozambique has already registered 300 more cases of leprosy, some 951 cases, than it registered for the whole of 2017.

The country, which had previously eliminated the chronic disease in 2008, is receiving funding from the Nippon Foundation—a non-profit philanthropic organisation from Japan that is active in many countries across the globe in eliminating leprosy—to provide free multi-drug therapy (MDT) to leprosy sufferers. Leprosy is curable, and if treated early enough disabilities related to the disease can be averted. But treatment can take between six to 12 months.

The chair of the Nippon Foundation and the World Health Organisation (WHO) goodwill ambassador for leprosy elimination, Yohei Sasakawa, recently visited the country to assess Mozambique’s progress in identifying and treating leprosy.

He told IPS that the increased attention by health authorities on relatively new endemic diseases such as Malaria, HIV and Tuberculosis (TB) may have contributed to the increase of new leprosy cases in the world.  This is despite the fact that treatment for the disease remains free. The WHO has provided MDT for free since 1995 thanks to initial funding from the Nippon Foundation.

Sasakawa said that while the WHO has indicated that a prevalence rate of one leprosy case per 10,000 inhabitants indicates elimination of the disease, “this indicator is simply a milestone. Eradication has not yet been achieved, so we must continue to work towards eradication and elimination.”

Inter Press Service (IPS): There has been a massive decline in the prevalence of leprosy following the global implementation of MDT in the 1980s by the WHO. However, there are still over 200,000 new leprosy cases recorded every year. And we have seen the emergence of multi-drug resistant leprosy in recent years. How has this affected the prevalence rate?

Yohei Sasakawa (YS): Both in the past and now, MDT is supplied by our foundation and distributed free of charge. Although the medication continues to be distributed free of charge, there are many patients with HIV, Malaria and TB, and these diseases get more attention from ministries of health than leprosy. This fact increases new cases of leprosy. There was a complication caused by multi-drug resistant leprosy, which also contributes to the increase in the number of patients, but it is a very small number, a much lower percentage.

IPS: How can Zero Leprosy be achieved?

YS: It starts from talking about the disease by using a social approach, because leprosy is a social problem. So the leaders of a country, teachers in schools etc, must work to spread the knowledge that leprosy is a curable disease. It is possible to cure with the correct treatment, which starts with the diagnosis of the skin. (Initial symptoms are patches of skin that are paler than normal.) If this message is spread exhaustively, for sure leprosy will be zeroed.

IPS: Do you find it difficult to reach the level of Zero Leprosy?

YS: Achieving Zero Leprosy is not such a difficult process. As I have said, we just need an exhaustive dissemination of the message that it is possible to treat the disease and that the medication is free at health centres. This is the only way that Zero Leprosy will be reached because this disease is not so difficult to diagnose, it is easy to identify.

IPS: Treatment of leprosy costs nothing. But we are seeing a shift towards complacency about the disease among government policy makers, and hence an increase in the prevalence of the disease in some areas. This is unfortunate. Why is this the case? And how do we address this?

YS: Leprosy is not a medical disease it is a social problem. This disease has no symptoms like pain, and this fact alone makes some people chose not to go to hospital when they come across spots on their skin etc. But with time, deformation takes place and then the person feels ashamed to go to hospital because of discrimination… For a long time, history has shown that people with leprosy were highly discriminated against.

And this discrimination still exists quite strongly amongst almost every population…I had the opportunity to see in Nampula (northern Mozambique) that those recovered from leprosy work as volunteers in the search for other people with leprosy in need of treatment. I think this is very good and would be even better if it were spread throughout the country. 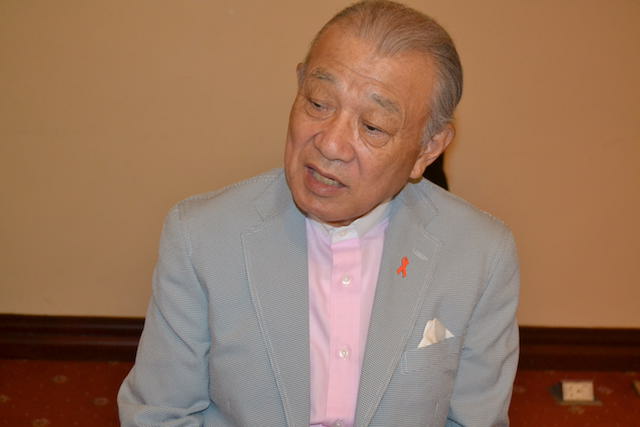 The chairman of the Nippon Foundation and the World Health Organisation (WHO) goodwill ambassador for Leprosy Elimination, Yohei Sasakawa, recently visited the country to assess Mozambique’s progress in identifying and treating leprosy. Credit: Elisio Muchanga/IPS

IPS: What concrete actions is your foundation carrying out, especially in Africa, to eliminate leprosy.

YS: Over the last 40 years the foundation has been working to provide the necessary assistance to people with leprosy through the WHO, and we will continue providing this assistance.

In Africa, specifically in countries with cases of leprosy, I try to talk to the top leader, the president. I explain the situation to them in order for them to take action. I think in talking to presidents it makes it easier for a ministry of health to get a bigger budget and carry out its activities.

The number of people with leprosy is much lower than those with HIV, Malaria and TB. So it is very difficult for the government to allocate a larger amount to the ministry of health to tackle this disease, and this is not prioritised. So I go to these countries and ask the government to increase funding to the ministry of health to combat the disease.

IPS: Your foundation has given support to many countries towards eliminating leprosy. What is the feedback from these countries and what can be taken as model or case for success?

YS: The feedback is very positive. We are experiencing a significant reduction in cases of leprosy with countries declaring themselves free from leprosy, although there are new cases. India is a great example, the country has the greatest number of leprosy sufferers in the world—about 70 percent of the world’s cases of leprosy are in India—and the work that has been developed there is positive.

However, one concrete case of success was in Indonesia where I met a girl who developed the disease at 18 and was cut off from her family. I had the opportunity to have a meal with this girl, and that gesture demystified that leprosy was a cursed disease.

YS:  Well, India, you know that this country has a massive number of people with leprosy, and many of those who have been treated and recovered from leprosy have nothing to live on and end up begging on the streets.

I spoke to the Dalai Lama to see what we can do for these people. He wrote a book, sold it and donated the money from the sale of the book to our foundation. Later we created an association to support people affected by leprosy by giving them a small pension. We also provide microfinance and teach people how to make their own living.

We also offer university scholarships to the children of people who have recovered from leprosy, but this type of support, unfortunately, only happens in Ethiopia and India.

IPS: Why only in these countries?

YS: I don’t know. What a pity (it is limited). We also wanted to do the same in Indonesia. Now here in Mozambique, from what I understand, there is no a colony where only people with leprosy live. But if people get together and form an association, maybe we can offer support. I understand that those recovering from leprosy want to work but do not have the opportunity. We can help create this opportunity.

IPS: Your foundation managed to lobby the United Nations to pass a resolution for the “elimination of discrimination against persons affected by leprosy and their family.” How do you measure the result of this lobbying today with regards to the commitment and actions from member states?

YS: It is true that we have been able to mobilise countries and pass this resolution, but what happens is that this rule contains its principle and guideline but has no penalty. Some countries have included this rule in their policies but unfortunately there are only a few countries that have done that.

Recently, a leading rapporteur was elected by the Directorate of Human Rights (in the U.N. Human Rights Office of the High Commissioner), and will have to visit countries and see why they are not complying with the U.N. recommendation of 2010.

IPS: There still remains significant stigma attached to the disease. And the stigma placed upon people with leprosy has been considered one of the greatest social injustices. In some parts of Africa people with leprosy are still separated from society, when research and science proves there is no need to. How do we overcome this?

YS: In fact there is discrimination against leprosy sufferers and this is difficult to remove from people. Stigma and discrimination are ancient and deeply rooted. So it is not only with my efforts that we are going to end this stigma, we need to have the participation of all of us working together to change this situation.