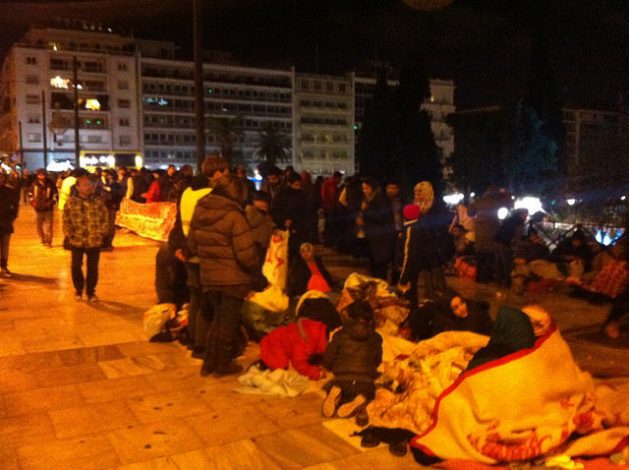 UNITED NATIONS, Jul 2 2018 (IPS) - On World Refugee Day June 20, the Hungarian Parliament passed the ‘Stop Soros’ bill which is aimed at criminalizing groups who support refugees and other types of undocumented immigrants.

The government also proposed a 25% migration tax on any organization which deals with immigration in any way. With these measures, the nonprofit sector is experimenting a full drawback in the country.

Aron Demeter, the Media Manager of Amnesty International Hungary, told IPS that this bill “might have a chilling effect on the wider civil society in Hungary”.

This bill comes at a tumultuous time, what with similar ideas and protocols being discussed within the United States. Also just this week, dozens of representatives from refugee-led organizations met in Geneva with UN High Commissioner for Refugees (UNHCR) for the first Global Summit on Refugees, during which they have been developing structures for a global network of refugees.

In Hungary, the sentiment is the contrary from that of the United Nations. The ‘Stop Soros’ bill is named after a notable philanthropist and financialist George Soros, who is known for being involved with Hungarian rights organizations.

Abroad, Soros has been known to support American progressive political issues, even establishing the Open Society Foundation, which in the foundation’s words works to, “build vibrant and tolerant societies whose governments are accountable and open to the participation of all people”.

Led by the conservative government of prime minister Viktor Orban and its party Fidesz (Hungarian Civic Alliance), the Stop Soros law includes prison time for groups that help illegal immigrants get documents to remain in the country and limitations for NGOs to prevent them of assisting in asylum cases.

Along with these measures and the aforementioned law, the Parliament approved a constitutional amendment which said that foreigners cannot stay in Hungary.

While the bill has not been signed and enacted yet, it will be rather impactful when it is law. According to Amnesty, these new additions to Hungarian law, “pose a serious threat to the right to seek asylum; the freedoms of association, assembly, expression, and movement; the right to housing and associated economic and social rights; and the right to be free from discrimination, in violation of international human rights law and regional law”.

Charlie Yaxley, UNHCR Spokesperson for Asia and Europe, told IPS: “It is our concern that these laws will further inflame what is already a hostile public discourse around refugees, asylum seekers, and migrants and will fuel xenophobic attitudes.”

Hungary has been restricting its immigration policies since the start of the refugee crisis, and with the reelection of Fidesz last April, the country is willing to pass more restrictive legislation in order to protect its Christian identity.

However, with these measures Hungary is slowly drifting away from Western Europe, and the international community is outraged by it. The international system, led by the United Nations, has expressed its discontent with the bill.

Demeter, from Amnesty International, said “Many international actors from the UN, CoE, EU or other stakeholders have openly criticised the adoption of the law and the government’s anti-NGO campaign. We expect the European Commission to launch an infringement procedure and – in case their assessment is the same as ours – take it to CJEU.

“We also expect that MEPs – the EP plenary is going to vote on the possible launch of the Article 7 against Hungary in September – will deem this bill as one of the clear signs that the Hungarian government is systematically neglects the core European values and rules”.

When asked for Amnesty’s views on the present bill, Demeter responded: “The recently adopted STOP Soros is a new low and it “perfectly” fits into the Hungarian government’s witch-hunt against human rights NGOs that has started in 2013”.

He added: “The vague and absurd new bill – by criminalizing totally lawful activities – aims to silence those NGOs who are critical towards the government’s cruel and unlawful refugee and migration policies and other human rights issues. Though the bill at least on the surface aims to put in jail only those who are helping asylum-seekers and refugees, the message is very clear: if you are critical, you are the enemy of the government”.

Yaxley also shared with IPS UNHCR’s views on the impact of the bill on refugees: “What we may see happen to people who have been forced to flee their homes due to war, violence, and persecution, many who have been through traumatic experiences and are simply looking to exercise their fundamental human right to seek asylum, is that they might be deprived of critical aid and services.”

However, according to the Interior Minister Sandor Pinter in a document attached to the draft of the bill, “The STOP Soros package of bills serves that goal, making the organisation of illegal immigration a criminal offence. We want to use the bills to stop Hungary from becoming a country of immigrants”.

Amnesty International many times has been named as an organisation “supporting illegal migration”. Since the law is vague and incomprehensible from a legal perspective nobody knows what is going to happen”, said Demeter.

Yaxley from UNHCR told IPS that this bill will definitely be a drawback for the nonprofit work in Hungary: “The key aspect is the additional financial requirements that are set to be placed on any NGOs that receive foreign funding. Our understanding is that our own funding [UNHCR’s] could potentially fall under this clause.”

“This may lead to a situation where essentially NGOs feel unable or unwilling to provide assistance that is really needed for refugees and asylum seekers that often arrive to countries with nothing more than the clothes on their backs or a handful of necessities.”

When asked about the repercussions after the bill is implemented, Demeter said: “Amnesty is committed to stay in Hungary and do its job just as in the previous nearly 30 years. We are going to fight against the law in front of every domestic and international court as possible”.