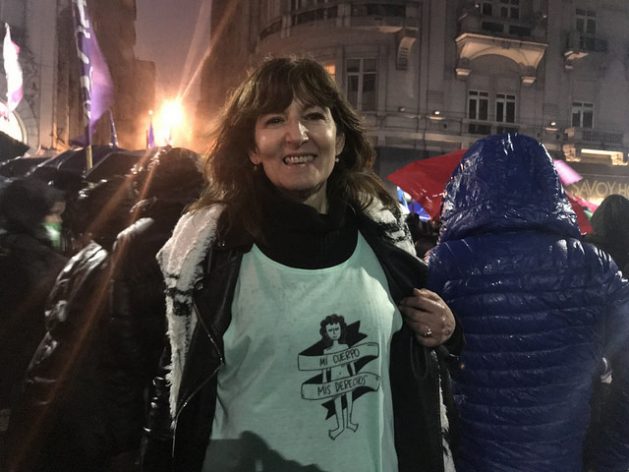 BUENOS AIRES, Aug 23 2018 (IPS) - The Argentine Senate’s rejection of a bill to legalise abortion did not stop a Latin American movement, which is on the streets and is expanding in an increasingly coordinated manner among women’s organisations in the region with the most restrictive laws and policies against pregnant women’s right to choose.

Approved in Argentina by the Chamber of Deputies and later rejected by a vote of 38 to 31 on Aug. 9, the bill to legalise abortion in the first 14 weeks of pregnancy and the historic social mobilisation on the streets offered hope for other countries in the region.

The Guttmacher Institute estimates that between 2010 and 2014, some 6.5 million abortions were practiced annually in Latin America and the Caribbean, up from 4.4 million between 1990 and 1994.

In the same period, the region had the highest rate of unintended pregnancies in the world: some 14 million, 46 percent of which end in abortion, according to the Guttmacher Institute, which advocates for women’s reproductive rights, in line with World Health Organisation (WHO) principles.

“Actually, it was politics that lost, because here, while society was discussing, talking and joining the green wave (the colour adopted by supporters of the legalisation of abortion), most of the political parties did not flinch,” Dr. Mabel Bianco, a feminist who presides over the Argentine Foundation for Studies and Research on Women (FEIM), told IPS.

“I think that although the impact of the green tide is less than if the law had been approved, the impact it has had on other countries will be felt and will help get laws passed; it will even revive alliances with parliamentarians and journalists. I’m sure it will yield fruit in several countries,” she said.

In Argentina, abortion is permitted only in cases of rape or risk to a woman’s life or health and is punishable by up to four years’ imprisonment for women in other cases.

In Latin America and the Caribbean, abortion is only legal in Cuba, French Guiana, Guyana and Uruguay, as well as Mexico City, while in the rest of the region “therapeutic abortion” is only allowed in specific circumstances such as those of Argentina.

Bianco attributes this to the weight of the Catholic Church in the region and “now to the new evangelical churches that are making headway in broad sections of the population, especially among the poor.”

“We are concerned because these groups work their way into political parties and then, when they make their way into parliament, they form blocks and govern decision-making, as is happening in Brazil,” she said.

That is why, in the view of this renowned Latin American feminist, the next step for Argentina and other countries in the region is to “make headway in a campaign for a secular state.” 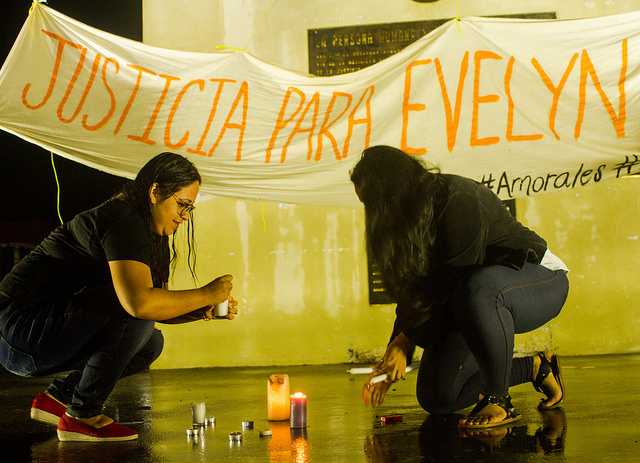 Two women light candles in front of the monument to the constitution in El Salvador’s capital, during a protest against the sentencing of a young woman to 30 years in prison, accused of having had an abortion. Credit: Edgardo Ayala/IPS

“We are winning the fight. We lost this battle but we will make a comeback, with the strength to win,” said the president of FEIM, one of the organisations that will present the bill for the legalisation of abortion again during the next legislative period.

At the same time, the groups will continue to fight to decriminalise abortion in Argentina’s outdated Penal Code and to ensure that the existing laws on sexual and reproductive health and comprehensive sex education are enforced, after “everyone in parliament made grandiloquent speeches saying they agreed.”

Countries with blanket bans on abortion

The debate is also growing in other countries in the region, such as the Dominican Republic, Haiti, Honduras, Nicaragua and Suriname, where abortion is prohibited under all circumstances.

The most draconian is the case of El Salvador, where a woman can be sentenced for up to 50 years for “aggravated homicide” if they have an abortion, in a country ruled by the left since 2009.

“If a woman is facing a pregnancy that puts her life at risk, if she has been raped, even if a 10-year-old girl is raped and becomes pregnant, they have no alternative in this country,” said pro-choice activist Sara García from San Salvador.

“The only alternatives for women are prison, death or damage to their health,” Garcìa, a member of the “citizens’ group for the decriminalisation of therapeutic, ethical and eugenic abortion” in El Salvador, told IPS.

García remarked that in her Central American country “the total criminalisation of abortion, its penalisation, affects a certain kind of women, a specific group: young women, women living in poverty, women with a low level of education, women facing off with the public health system, these are the women who face the greatest consequences of such a restrictive law.”

According to the Organisation of Salvadoran Women for Peace (ORMUSA), between 2000 and 2014, 147 women were prosecuted for abortion-related crimes, of which 49 were charged: 23 for abortion and 26 for murder. In 2018, 24 women were imprisoned for allegedly having an abortion, even though some had apparently miscarried.

But after intense debate by feminist and academic organisations, the situation may change.

“We have raised the debate; there is a bill that seeks to decriminalise abortion on four grounds in the Legislative Assembly, while another bill seeks the decriminalisation of abortion on two grounds,” García said.

“We know that there is a debate that is biased, that we face dogmatism and fundamentalism. But, nevertheless, we know that social and public awareness is what makes it impossible to go backwards in our country in spite of all this,” she said.

According to Garcia, the “green tide” – named for the green handkerchiefs worn by supporters of the legalisation of abortion – “has meant strength and hope” for activists fighting for these rights in El Salvador and the rest of the region.

While in El Salvador’s Legislative Assembly there are debates “that made one cringe,” without any basis in science or human rights and rooted “in prejudice,” “we know that on the streets, in academia and in NGOs there is another level of understanding,” said the activist.

“While there are fundamentalist groups, there are also others working for a society where sexual and reproductive rights are respected,” she said.

“The green tide influences the entire Latin American and Caribbean region, gives us more strength and tells us that this is a struggle where all women are involved and abortion is going to be legal throughout Latin America and the Caribbean,” Garcia concluded.

In Venezuela, governed by the left since 1999, the Penal Code prohibits abortion except in cases where the mother’s life is at risk, and establishes penalties of six months to two years for anyone who performs the procedure.

But in June of this year, several feminist organisations that support the government asked the ruling National Constituent Assembly to amend Article 76 of the 1999 constitution, which protects life “from conception.”

They also called for the inclusion of a sexual and reproductive rights chapter in the constitution, said Taroa Zúñiga, of the Information Network for Safe Abortion (RIAS), which receives 43 calls a day from women who decide to have abortions.

The Venezuelan activist told IPS from Caracas that despite the defeat in the Argentine Senate, what the green movement represents has grown stronger in the region.

“Basically, understanding that the right to abortion can become a mass movement has been very powerful and revitalising. It is undoubtedly an unstoppable movement in Latin America,” she concluded.