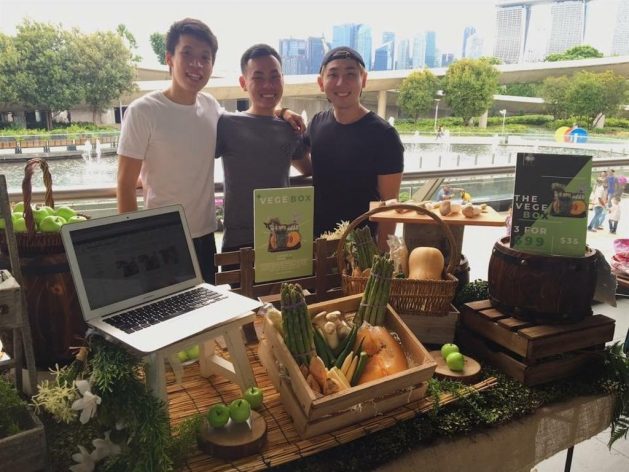 SINGAPORE, Aug 27 2018 (IPS) - To tackle food waste, Nicholas Lim did not simply spread the word among his friends and family.

In an experiment to see if he could make a viable business out of the problem, he co-founded an online platform that allows individuals, eateries and voluntary welfare organisations to order discounted groceries that would otherwise be thrown away.

TreeDots began operations six months ago and now has about 180 business partners, which obtain discounted groceries from about 30 suppliers.

The items may be slightly defective or approaching their expiry dates, but prices are hugely marked down. For instance, 12 one-litre bottles of olive oil cost USD8, compared with about USD12 per bottle at a supermarket, while a kilogramme of Cavendish bananas can be bought for about USD 1, about a third of the price it is usually sold for elsewhere.

About 10 people order TreeDots’ weekly “vege boxes”, which contain up to 14kg of fruits and vegetables that may look “ugly” or are blemished. The boxes’ content varies according to what the suppliers are looking to let go of. Each box costs USD30 and three boxes cost USD84.

Lim said the start-up has generated enough revenue to cover its overhead costs, which includes a refrigerator truck, but the founders are still working unpaid.

“Response has been growing over the months, but still mostly on the business-to-business level…Despite growing interest in the issue of food waste, we still feel the majority of people here are not willing to accept such products,” said Lim.

While eco-businesses selling items such as upcycled bags or bamboo and stainless steel straws are not new to Singapore, the experiences and ability of two fledgling ventures that deal in perishable food items could signal if a broader swathe of local consumers are ready to adopt low-waste habits in a bigger way.

In May, a 1,200 sq ft grocery store opened in Sembawang Hills estate, targeting patrons keen to shop for daily necessities stripped of the usual packaging. Inspired by a video of a provision shop with the same concept operating somewhere in Europe, UnPackt’s co-founder Florence Tay, 36, is looking to help the average shopper to take small steps to reduce waste in everyday life.

For a start, the store has stocked about 70 types of toiletries, cleaning agents and dried foodstuff like cereal that are stored in self-service dispensers and priced according to weight.

Patrons are free to buy only the amount they want, and the items are a shade cheaper than what they would cost in a supermarket. For instance, UnPackt is selling 100g of raw sugar for USD0.10, the same amount of organic pasta for USD0.50 and, almonds, for USD3.20.

Customers bring their own receptacles or use the jars and containers that Tay has collected, cleaned and sterilised.

UnPackt’s co-founder Jeff Lam, 38, who lives alone, said he used to throw out a lot of unfinished food that had expired and hopes to “debunk the myth that eco-friendly habits are expensive and unsustainable”.

The duo have pumped in about USD 73,000 to get the business going and while they see it also playing an advocacy role, they stress the need to be financially sustainable.

“Profitability still has to come in, in order for us to keep running (the store) and prove to the man in the street that this is the one-stop shop for their low-waste lifestyle habits,” said Tay.

Good cause but will customers bite?

The efforts by TreeDots’ and UnPackt’s founders come amid the growing amount of food and plastic waste generated in Singapore. A waste audit by the National Environment Agency found that over half of food waste generated by households here would not have been trashed had consumers bought the quantities they needed or cooked the right portions.

Meanwhile, packaging waste made up a third of the 1.7 million tonnes of domestic waste generated here last year. About 15 percent of the packaging waste – or about 83,550 tonnes – is made up of plastic and paper disposables such as single-use plates and take-away food containers.

But the key ingredient determining the reach and sustainability of businesses such as TreeDots and UnPackt could ultimately be their prices, said business experts and observers.

The majority of consumers in Singapore still make their purchases based on prices, they said.

Associate professor Lawrence Loh from the National University of Singapore’s School of Business said: “At this juncture, consumers are still very sensitive to what hits their pockets. We have not achieved a concerted vision and effort to cut waste. Economics still takes precedence.”

Loh, who directs the school’s Centre for Governance, Institutions and Organisations, said consumers also want to be assured that going “packaging-free” does not compromise hygiene.

Ang Huan Ting, who has ordered six of TreeDots’ vegetable boxes since the start of the year, said she finds their price “pretty reasonable considering the quality of the products and door to door delivery”.

The 27-year-old civil servant and her husband takes up to two weeks to consume the vegetables.

“The offerings are different each time, and I like the element of surprise… Another reason why I keep subscribing (to the vegetable boxes) is because I find the founders very passionate about their vision to reduce food waste,” said Ang.

Dumpster diver Daniel Tay, who leads outings to “rescue” discarded edible produce and started the Freegan in Singapore Facebook page said it may be more difficult for such businesses to stay afloat here, given the cost of rentals and transport.

Jeff Cheong, president of advertising agency Tribal Worldwide Asia, said brands that championing the zero waste culture must be “actively involved in education and outreach to share ideas that ‘normal people’ can do right from their home”.

“From producing content, to holding public talks, to interacting with patrons at their stores, these advocates-cum-businessmen need to invest time to build up the community from the heartlands. Working with young children is key in shaping their minds towards responsible living in the future,” said Cheong.

Other smaller outfits that operate online or as pop-up stores said challenges lie in reaching out to a wider segment of Singaporeans.

Danielle Champagne, who co-founded the Green Collective, a three-month pop-up store in Paya Lebar, said: “We might feel like there is a growth (of people reducing waste) but it could be because of the circles we are in… We don’t want to just be preaching to the converted.”

Champagne owns Zhai Eco, which sells clothing made of natural fibres like bamboo and linen. Zhai Eco is one of 15 brands found at the pop-up, which offers customers recycled bags only when they request for one.

Others, like online shop The Sustainability Project and pop-up store The Zero Ways hope their wares — which include beeswax wraps and straws made of bamboo or stainless steel — can help Singaporeans adopt more eco-friendly behaviour.

Said Lily Khairunnisa, who started The Zero Ways in January with her family members: “More Singaporeans, especially of the younger generation, are getting more conscious of the waste we produce. We are still quite far from having these practices ingrained in our everyday lives, but it is picking up traction.”

The 30-year-old also believes there is strength in numbers. “It takes time… We have seen many other green businesses come up in the last few months. We see one another as collaborators, and I think that would make it easier to spur the movement,” she said.