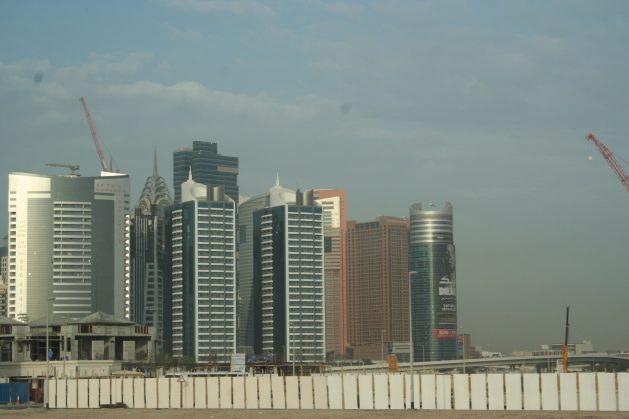 The United Arab Emirates is also paying the price of rapid economic development in terms of climate change. Air-conditioning has proved to be a major challenge to climate change mitigation and because of the rise in temperatures in Dubai, most new buildings have air-conditioning. Credit: Busani Bafana/IPS

DUBAI, United Arab Emirates, Sep 20 2018 (IPS) - “Look at these tall, beautiful buildings. I have worked as a mason during the construction and was one of those who laid [the brickwork] brick by brick,” says Mohammed Akhtar* who has been working as mason for over a decade in Dubai, United Arab Emirates (UAE).

Akhtar has seen the evolution of Dubai’s skyline over time. “It has been an overwhelming journey.”  When asked what has changed in the last 10 years, Akhtar smiles and says the weather.

“Temperatures outside have been increasing so fast that it drains our energy quickly. We cannot fight with nature. But at least we could play our role in protecting the environment,” the 45-year old Pakistani tells IPS. For him, sitting under the shade of a tree during his work break is the best form of relaxation.

While the rise in temperatures is certainly a concern, this Gulf state has a high level of awareness and government response when it comes to climate change mitigation.

The Global Green Growth Institute (GGGI) has referred to the UAE as the most responsible country in the Gulf Cooperation Council (GCC) when it comes to green growth, and as one of the best-performing countries across the globe.

“The kind of initiatives the UAE is taking is very encouraging and we expect things will improve with the passage of time,” GGGI Director General Dr. Frank Rijsberman tells IPS. The institute has a mandate to support emerging and developing countries develop rigorous green growth economic development strategies and works with both the public and private sector.

Rijsberman gives credit to the country’s leadership, who embraced green growth and sustainability much earlier and faster than many countries in the world.

Rijsberman adds also that the UAE was quick to realise the challenges of water scarcity and installed desalination plants at a time when other countries were only planning, theirs. A GCC report shows that Kuwait was the first country in the region to construct a desalination plant in 1957, with the UAE constructing its first plant two decades later.

Rijsberman, however, says that a lot remains to be done.

“Right now, the challenge is how to run a plant with energy efficiency. Now is the time to move green energy options to run these huge plants, which are a major source of water supplying to the country,” says Rijsberman.

Like many countries, the UAE is also paying the price of rapid economic development in terms of climate change.

“Rapid economic development and population growth in the UAE has led to the challenges like greenhouse gas emissions, extreme weather conditions, water scarcity and habitat destruction. All these issues are interlinked,” Rijsberman tells IPS.

According to the Ministry of Climate Change and Environment; direct impacts of extreme weather events, as well as slow-onset phenomena such as sea level rise, could disrupt the daily functioning of transport and infrastructure, impact the value of real estate, affect environmental assets, and damage the tourism industry.

“The effects of climate change are likely to be felt most severely in coastal zones, where marine habitats will suffer from rising water temperatures and salinity, whereas infrastructure will be tested by storm surges and sea level rise. Other risks include weakened food security and health damages from extreme weather events,” the report further says.

The UAE’s National Climate Change Plan 2017-2050, which was released early this year, notes that climate change impacts increase national vulnerability and, if left unmanaged, will affect the growth potential of the country.

According to the report, the most vulnerable areas to climate change in the UAE include water, coastal, marine, and dry land ecosystems; buildings and infrastructures; agriculture and food security; and public health.

“Based on the analysis of past and present anthropogenic drivers, future projections using climate models suggest an increase in the UAE’s annual average temperature of around 1°C by 2020, and 1.5-2°C by 2040.

“The effects of climate change are likely to be felt most severely in coastal zones, where marine habitats will suffer from rising water temperatures and salinity, whereas infrastructure will be tested by storm surges and sea level rise. Other risks include weakened food security and health damages from extreme weather events.”

In addition, climate change could have implications on the UAE’s development objectives. “Direct impacts of extreme weather events, as well as slow-onset phenomena such as sea level rise, could disrupt the daily functioning of transport and infrastructure, impact the value of real estate, affect environmental assets, and damage the tourism industry,” the report further says.

But plans are already in place. “They have seen the storm coming and they are preparing themselves to fight it,” says Rijsberman.

However, there are many challenges that remain to be tackled.

According to the Environment Agency – Abu Dhabi, the country  has a relatively low share, less than 0.5 percent, of global emissions. For this reason, the voluntary adoption of measures to control and limit domestic GHG emissions would have a negligible impact in solving the global problem of climate change.

However, the country’s capital, Abu Dhabi, has very high per capita CO2 emissions, 39.1 tonnes in 2012 an increase of 4.4 percent compared to 37.44 tonnes in 2010—more than triple the Organisation for Economic Co-operation and Development’s (OECD) average of 10.08 tonnes.

The main contributors to CO2 emissions in 2012 were the production of public electricity and water desalination (33 percent), oil and gas extraction and processing activities (25 percent), transport (20 percent) and industry (12 percent).

Rijsberman was in Dubai to launch a joint initiative with the World Green Economy Organisation (WGEO). Both organisations have signed a partnership agreement to fast track green investment opportunities to develop bankable smart green city projects across the world.

“The UAE has been a leader in green growth. It is not only investing within the country but also helping other states to promote green cities,” Rijsberman says.

Khawaja Hasan has been working as an environmentalist with both public and private sectors in the UAE for about a decade and tells IPS that while government is serious about promoting green growth initiatives across the board there are several challenges that slow down implementation.

“The private sector suffers with lack of awareness, lack of technology and above all cost are major issues that [hinders] the green growth.

“They [private sector] believe in short term goals. They don’t want to invest extra to benefit long term. Moreover there is no major direct monetary incentives from the government side to acquire and implement green approach.”

He also says that a lack of affordable green technology is also a major factor for mid level and small companies.

Green growth is not a luxury. It is a necessity, says Rijsberman.  He urged governments, including the UAE, to develop policy and introduce incentives that reach the grassroots. “If the green policy and initiatives are not reaching the people then it is not going anywhere.”

For instance, Rijsberman says air-conditioning, is a major challenge to climate change mitigation.

“It is directly related to how the buildings are constructed. If we contract close boxes without any air ventilation, air-conditioning or artificial cooling is inevitable. However, if we work on building style and work on structural changes, dependency on air-conditioning would decrease.

“Today, the situation in Dubai is, inside the building, we are shivering with the lowest temperature and outside, our local environment temperature is becoming unbearable due to the hot air that millions of air-conditioning are throwing out in the environment. The whole cycle becomes artificial and imbalance,” he said.

Though Akhtar is doing his little bit to address the balance.

“If we are building beautiful air-conditioned buildings, we should also plant trees too,” says Akhtar who, each year on his daughter’s birthday, plants a tree in his residential compound in Dubai. “This is my gift to this city who has given me an opportunity to earn decent money for my family back in Pakistan.”