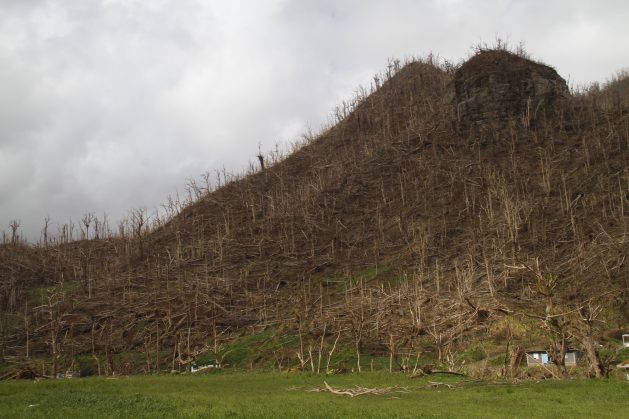 In many parts of Dominica, Hurricane Maria razed the greenery, including agricultural cultivation, from the hillside of the mountainous island. Credit: Kenton X. Chance/IPS

And it is not just because he is his country’s minister of agriculture.

When the category 5 hurricane made landfall in Dominica, Austrie, then the country’s minister of housing, was weeks away from harvest time at his two-acre farm where he had 800 plantain trees, in addition to yams.

“So, personally, I suffered some loss. But to me, my agriculture, while it is commercial, it’s not really my livelihood,” he told IPS on the sidelines of the 15th Caribbean Week of Agriculture (CWA), the premier agriculture event in the 15-member Caribbean Community (CARICOM), which is taking place in Barbados from Oct. 8 to 12.

“For us, our own scientists warned us of the ravages with respect to drought, with respect to the destruction of our reefs, and by extension, our marine life." -- prime minister of Barbados, Mia Mottley.

“I experienced it, I saw it and I know how much it cost me; that I can never recover the cost of production and so I understand what the regular and ordinary farmer is going through, fully dependent on agriculture,” Austrie, who became minister of agriculture three months ago, said of the monster hurricane.

In addition to the destruction of his plantain trees, Hurricane Maria left several landslides on Austrie’s farm when it tore across Dominica, leaving an estimated USD 157 million in damage to the agriculture and fisheries sectors, and total loss and damage amounting to 225 percent of the nation’s GDP.

Austrie is taking steps to reduce the impact of future cyclones, which forecasters say will become more frequent and intense as a result of climate change.

Climate resilience in agriculture and fisheries was a feature at CWA.

The event opened on the day that the Intergovernmental Panel on Climate Change (IPCC) said, in its latest report, that limiting global warming to 1.5 degree Celsius above pre-industrialisation levels would require “rapid, far-reaching and unprecedented changes in all aspects of society”.

As part of their advocacy for a legally-binding global climate accord, small island developing states (SIDS) like those in the Caribbean, have been using the mantra “1.5 to stay alive”.

SIDS say capping global temperature rise at 2°C above pre-industrialisation levels — as some developed countries have suggested — would have a catastrophic impact on SIDS.

The IPCC’s latest report says limiting global warming to 1.5°C, compared to 2°C, could go hand in hand with ensuring a more sustainable and equitable society.

“One of the key messages that come out very strongly from this report is that we are already seeing the consequences of 1°C of global warming through more extreme weather, rising sea levels and diminishing Arctic sea ice, among other changes,” said Panmao Zhai, co-chair of IPCC Working Group I.

In an address to delegates at CWA, secretary-general of CARICOM, Irwin LaRocque said the IPCC report supports the findings of Caribbean climate scientists “which showed that we will attain the 1.5°C warmer world much sooner than anticipated — by 2030”.

LaRocque said such as situation will result in much harsher climatic conditions for the Caribbean.

“Worse, the current trend of Nationally Determined Contributions (NDCs) for reductions in greenhouse gas emissions, would lead to warming in the range of three degrees centigrade by the end of the century.”

CARICOM continues to advocate for greater ambition in the reduction of greenhouse gases, but must prepare for the worst, he said.

“We, therefore, need to upscale our planning for adapting to that reality,” LaRocque said, even as he noted that the IPCC report corroborates Caribbean scientists’ projections that even a 1.5 degree rise would result in significant impacts on fresh water and agricultural yields.

Further, such a level of warming would cause extreme temperatures, increases in frequency, intensity, and/or amount of heavy precipitation, and an increase in intensity or frequency of droughts.

“To counter that threat, we have been working on a programme along with our international development partners, to improve the resilience of the agriculture sector,” he said.

LaRocque pointed out that CARICOM’s agricultural research agency has been developing climate smart agriculture technologies suitable for agriculture in the region.

“CARDI has recommended identification, storage, sharing and utilisation of climate-ready germplasm of important food crops as one of the best mechanisms for building climate resilience that safeguards food and nutrition security.”

Meanwhile, CARICOM’s newest head of government, prime minister of Barbados, Mia Mottley, reminded delegates at the event that in September she told the United Nations General Assembly that the CARICOM region understands that it has been made dispensable “by those who believe that a 2-degree change in temperature is acceptable to the world”.

She told CWA that she did not know then that the IPCC report that came after her speech would paint such a scenario.

Mottley, who was elected to office in May, said, however, that Caribbean nationals should not have been taken by surprise.

“They warned us, more than 10 years ago. And we have allowed others to determine our advocacy and our voice without, perhaps remembering that phrase from one of the other countries, Jamaica, that ‘We small but we tallawah (feisty)’.”

And while those calls were not headed a decade ago, Hurricane Maria and the other cyclones, including Hurricane Irma, which affected the Caribbean in 2017, have brought them home forcefully.

“Dominica is a mountainous country. We farm on the hillsides. But there are technologies that can now be used to protect your lands from moving. We have to begin using new and innovative technologies,” Austrie told IPS as he reflected on the impact of Hurricane Maria on Dominica.

“And so we believe that while Maria dealt us a blow and nobody wishes for another Maria, it taught us some lessons, which had it was not for Maria, we would have taken for granted. We had adopted a kind of complacent attitude but I believe that Maria really struck us and sent it home that we have to begin to do things differently,” Austrie said.