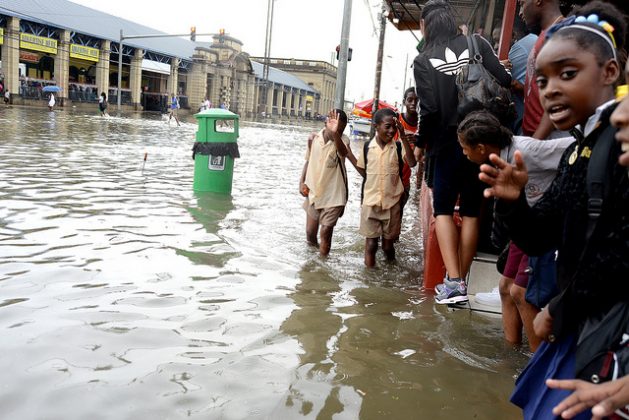 Flooding in Trinidad's capital of Port of Spain. As human activities have already caused approximately 1°C global warming above pre-industrial levels, impacts of the changing climate have already unfolded and manifested through floods, droughts, and heatwaves. Credit: Peter Richards/IPS

UNITED NATIONS, Oct 10 2018 (IPS) - The release of a groundbreaking report has left the international community reeling over very real, intensified impacts of climate change which will hit home sooner rather than later. So what now?

The Intergovernmental Panel on Climate Change (IPCC) has revealed that the international community is severely off track to limit climate change and that we will see the world warm over 1.5 degrees Celsius by 2030 if no urgent action is taken.

“It is quite discouraging to be told how little time we have,” Amnesty International’s policy advisor Chiara Liguori told IPS.

Policy director of the Climate and Energy Programme at the Union of Concerned Scientists Rachel Cleetus echoed similar sentiments to IPS, stating: “This report should be the shot in the arm that governments of the world need. They asked for this information in 2015 and it is now before us, and it is deeply sobering.”

As human activities have already caused approximately 1°C global warming above pre-industrial levels, impacts of the changing climate have already unfolded and manifested through floods, droughts, and heatwaves.

This year saw an unprecedented global heatwave from the Arctic to Japan.

In the United States, extreme heat now causes more deaths in cities than all other weather events combined while Japan saw 65 peopled killed in one week due to a heatwave, which was declared to be a “national disaster.”

The IPCC report, called Special Report on Global Warming of 1.5 °C, known as SR15, projects that such extreme weather events will only get worse if warming is not limited to below 1.5°C compared to 2°C.

For instance, the 91 authors who prepared the report estimated that there will be lower risks for heat-related morbidity and mortality at 1.5°C compared to 2°C.

Seas will rise 0.1 meters less at global warming of 1.5°C, which means than 10 million fewer people would be exposed to related risks including flooding and displacement particularly in small island nations.

Impacts on biodiversity and ecosystems, including species extinction of coral reefs, are also projected to be lower at 1.5°C.

“Even though it seems like a small difference, there are really consequential differences between 1.5 and 2°C,” said Cleetus.

“Every fraction of a degree we can avoid is important,” she added.

While small island developing states advocated heavily for limiting warming to 1.5°C before the Paris Agreement, the international community settled on 2°C.

However, due to the lack of climate-related commitments, the world is on a path for a temperature rise of more than 3°C.

“The feasibility of 1.5°C is tied up in policy decisions we make, technology choices, social and economic choices…and we’ve got no time to waste,” Cleetus said.

Both Cleetus and Liguori highlighted the need for a large-scale transformation in all sectors including the energy sector.

This means that any remaining CO2 emissions would need to be removed from the air.

Many have looked to CO2 removal technologies such as bioenergy with CO2 capture and storage (BECCS), a process, which involves burning biomass such as plant matter for energy, collecting the CO2 they emit, and then storing the gasses underground.

However, Liguori noted that the controversial BECCS technology requires large lots of land in order to grow biomass, which could displace agricultural production and even communities.

“We’ve already seen patterns of climate change mitigation measures that are taken in the name of combatting climate change but at the same time they don’t respect human rights and result in serious consequences for people,” she told IPS.

“It can put an excessive burden on people that are already the most exposed to climate change and less able to defend their rights,” Liguori said.

In May 2018, Amnesty International documented how the Sengwer indigenous community from Embobut forest, Kenya were forced from their homes and stripped of their lands after a government campaign to reduce deforestation.

However, claims that the Sengwer are harming the forest were not substantiated, Liguori said.

“All these measures need to be compliant with human rights, because you cant just transfer one problem to the other. We need to shift towards a zero-carbon economy but we cannot replicate the same pattern of human rights violations that we have currently,” she added.

Cleetus also pointed to the need for climate finance for developing countries.

“Countries need help making this clean energy transition as well as help to invest in resilience to keep their communities safe—this is a piece that must be addressed,” she told IPS.

The Green Climate Fund (GCF) has been a crucial instrument to address climate change in developing countries and support efforts to limit greenhouse gas emissions.

However, of the USD10 billion pledged to the fund, only three billion has been paid leaving the GCF in desperate need of sustained if not increased financial commitments from countries in order to limit warming to below 1.5°C.

But countries such as Australia and the U.S. have rejected requests to provide more money.

Climate finance has been a major sticking point in many international negotiations including at the Conference of the Parties (COP) and is predicted to pose a major hurdle at the upcoming COP in Poland where governments will convene to finalise the implementation rules for the Paris Agreement.

While the solutions to address and respond to climate change exist, it is this lack of political will and engagement that is most concerning.

“There is a lot we can do to seriously limit emissions and its up to the policymakers and governments of the world to step up,” Cleetus said.

And people have already begun to fight back, holding their governments accountable to climate action.

Most recently, the Hague Court of Appeal upheld a 2015 ruling which ordered the Dutch government to reduce its greenhouse gas emissions by 25 percent from 1990 levels by 2020.

The case, put forth by the Urgenda Foundation and a group of almost 1,000 residents, argued that a failure of the government to act on climate change amounts to a violation of the rights of Dutch citizens.

Similar cases can now be seen around the world.

“This is quite encouraging because it is an element that can push governments to get there, to step up their commitments,” Liguori said.

Cleetus expressed her hope for the future of climate action and urged the international community to do more to make the transition to a carbon-free economy and society a reality.

“We don’t have to make a false choice between sustainable development, poverty eradication, and our climate goals. They can go hand in hand and indeed they must go hand in hand if we are going to surmount these policy and political obstacles to climate action,” she said.

“Our choices still matter—in fact our choices matter more than ever before. It is in our hands what the future of our world climate will look like and the kind of climate we will leave to our children and grandchildren,” Cleetus concluded.