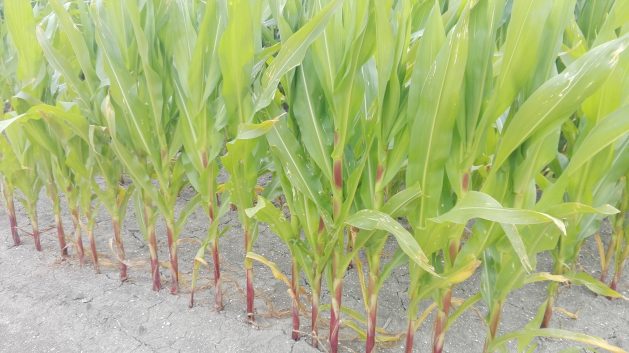 A drought stressed maize crop on Leo De Jong's farm, in the Netherlands. De Jong says he spends between 20,000 and 25,000 Euros per week on irrigation. Credit: Friday Phiri/IPS

WAGENINGEN, The Netherlands, Sep 5 2018 (IPS) - “This season, the month of May was particularly hot and dry,” says Leo De Jong, a commercial farmer in Zeewolde, in Flevopolder, the Netherlands. Flevopolder is in the province of Flevoland, the largest site of land reclamation in the world. Here a hectare of land costs up to 100,000 Euros. “At the moment, we are spending between 20,000 and 25,000 Euros per week on irrigation.”

While most reports point to developing nations being the most vulnerable to the effects of climate change, it is slowly emerging that farmers in the North who generally have more resources are feeling the heat too.

From incessant wild fires and powerful hurricanes in the United States and the Caribbean, to record-breaking high temperatures and droughts in Europe and Asia, the scientific community is unanimously in agreement that climate change is the more likely cause of these extremes in weather.

And it is causing severe disruptions to agricultural production systems, the environment and biodiversity.

This is troubling as, according to the Fifth Assessment Report of the Intergovernmental Panel on Climate Change, a rise in temperature of more than 2°C could exacerbate the existing food deficit and prevent the majority of African countries from attaining their Sustainable Development Goals on poverty and hunger.

While De Jong can afford spending thousands of Euros on irrigation each week, he knows it is no longer sustainable for his farming business. He currently grows potatoes, onions and wheat, among other crops, on 170 hectares of reclaimed land. 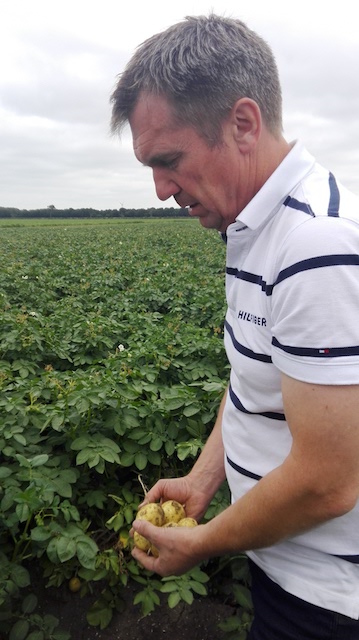 Leo De Jong in his potato field, in the Netherlands. Credit: Friday Phiri/IPS

After a flood in 1916, the Dutch government decided that the Zuiderzee, an inland sea within the Netherlands, would be enclosed and reclaimed. And later, the Afsluitdijk was completed—a 32 kilometre dyke which closed off the sea completely. Between 1940 and 1968, part of this enclosed inland sea was converted into land and in 1986 it became the newest province of the Netherlands—Flevoland.

Soil health in the Flevopolder, Flevoland, which sits about four meters below sea level, is of particular importance. De Jong sees it as a hallmark for every farmer in this era of climate change, regardless of their location.

He believes the answer to the climate challenge lies in farmers’ ability to “balance between ecology and economy.” This, he tells IPS, can be achieved through various ways such as improved and efficient irrigation technology, research and innovation, as well as farmer-to-farmer knowledge exchanges like the one to which he belongs—the Skylark Foundation. At the foundation he exchanges knowledge with a group of colleagues, mainly focusing on soil health.

“I have a feeling that the climate is getting extreme but consistent usage of manure, cover crops and other efficient sustainable practices guarantees good soil health, and soil health is the hallmark on which sustainable crop production is built.”

Similarly, Peter Appelman, who specialises in farming broccoli and cabbage, agrees with the soil health argument.

“We have stopped feeding the crop but the soil,” he tells IPS, pointing at a pile of composite manure. “I am not an organic farmer but I try to be sustainable in whatever way because this comes back to you. You can’t grow a good product in bad soil.”

In addressing the production cost side of the business, Appelman points to consumer satisfaction and predictable markets as key enablers to farmers’ sustainability in this era of climate stress.

As consumer preferences become more obvious, Appelman says farmers should not expend their energies complaining about market access and growing consumer demands but should rather work hard to satisfy them.

“I think my fellow farmers complain too much, which is not the best practice for the business,” he says. “As farmers, we should exert this energy in looking for customers, and work to satisfy them—I believe better farmer-to-customer relations should be the way forward.”

According to Appelman, production should be determined by consumer/market preferences. “I travel around the world looking for markets, and through these interactions, I learn and do my work according to the needs of my customers. Look for customers first and then proceed to produce for them, because it is tough in the production stage,” says Appelman, whose farm has an annual turn-over of about two million Euros.

The Appelman family grow broccoli on 170 hectares and red and white cabbage on 60 hectares.

According to Professor Louise Fresco, president of the research executive board of Wageningen University in the Netherlands, the answer to the global food challenge lies in ensuring that the contribution of agriculture to climate change is positive rather than negative.

This, she says, is only possible through investment in research and innovation in order to achieve maximum efficiency for food production and to minimise waste.

“The agriculture sector therefore needs to do more than produce food—but produce efficiently,” she said in her opening address to the 2018 International Federation of Agricultural Journalists congress held in the Netherlands in July. “Food has to be produced not as a chain, but in a circular way. Water and energy use are highlights.”

Under the theme: Dutch roots—small country, big solutions; the congress highlighted what lies at the centre of the Netherlands’ agricultural prowess.

“Productivity through innovation and efficiency is the answer to why the Netherlands,ca small country, is the second-largest agricultural exporter [in the world],” said Wiebe Draijer, chief executive officer and chairman of Rabobank.

Draijer said Rabobank, which was founded as a cooperative, was happy to be associated with the Dutch agricultural prowess, which is anchored in sustainable and innovative practices.

Sustainability is the buzz word globally. However, it seems there is much more to be done for farmers to achieve it, especially now that negative effects of climate change are similarly being felt in both the north and the global south.