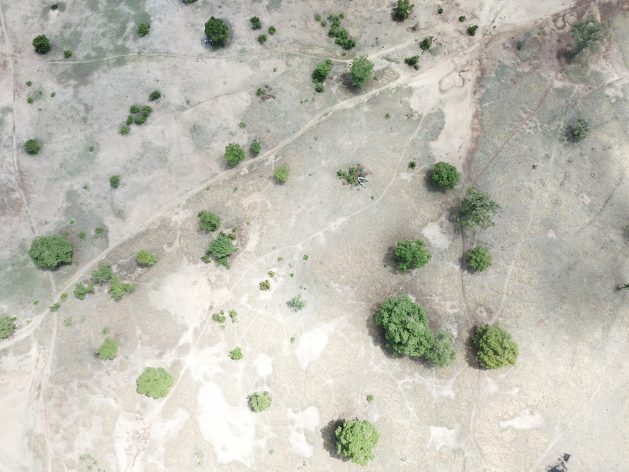 Drone visual of the area in Upper East Region, Ghana that have not been restored. Credit: Albert Oppong-Ansah /IPS

GARU and TEMPANE, Ghana, Aug 20 2018 (IPS) - In the scorching Upper East Region of Ghana, the dry seasons are long and for kilometres around there is nothing but barren, dry earth. Here, in some areas, it is not uncommon for half the female population to migrate to the country’s south in search of work, often taking their young children with them.

“We realised that the long dry spell, bare land and high temperature of 40 degrees and the absence of irrigation facilities for farmers to [allow them] to farm year-round…effectively made them unemployed for the seven-month dry season,” Ayaaba Atumoce, chief of the Akaratshie community from the Garu and Tempane districts, tells IPS.

“But for this initiative, our younger and future generation may have never known the beauty and importance of such indigenous trees as they [would have] all been destroyed." Talaata Aburgi, a farmer from the Garu and Tempane districts in Ghana.

The Garu and Tempane districts, which encompass 1,230 square kilometres or 123,000 hectares, had large portions of barren and degraded land until just three years ago. Now, there are pockets of lush grass, neem trees, berries and indigenous fruit growing on some 250 hectares of restored land. The dry earth is beginning to flourish, albeit it slowly.

Atumoce remembers that growing up in the area, there was dense forest cover. But it gradually diminished over time as the mostly farming communities here supplemented their income by making charcoal and selling it at regional centres. According to the 2015 Ghana Poverty Mapping report, the rate of poverty in these two districts is 54.5 percent or 70,087 people—accounting for the highest number of impoverished people in the entire region.

The rate at which trees were cut down surpassed the rate at which new trees grew, if they did at all. And soon there were less and less trees for people to make charcoal with. Sprouts were soon unable to grow also as the land became hard and lacked nutrients.

“Previously, we would prepare our farmlands in early February and start planting when the rains begin in late March or early April and ended in late September or mid-October. Now, our planting is pushed to the end of June or early July and ends just around the same period it used to. We are getting low yields,” Atumoce says.

Carl Kojo Fiati, director of Natural Resources at Ghana’s Environmental Protection Agency, tells IPS that deforestation and indiscriminate bush burning in the Upper Region has reduced the natural water cycles band, a natural cycle of evaporation, condensation and precipitation, and resulted in the reduced rainfall pattern and unproductive land.

“When the shrubs are allowed to grow it draws water from the ground that evaporates into the atmosphere and becomes moisture. This moisture adds to other forms of evaporation and this is condensed and comes down as rain,” he explains.

The reduced rainfall affected this community significantly. According to the Garu and Tempane districts Annual Report, 2014, large portions of the population migrated south in search of jobs from November 2013 to April 2014. According to the report, 53 percent of women in the Kpikpira and Worinyanga area councils migrated with their children to the southern part of Ghana to engage in menial jobs, exposing their children to various forms of abuse, and depriving them of basic needs such as shelter, education, health care and protection.

“After watching the video [presented by WVI] we got to know and accepted that we are suffering all these consequences because we harvested trees for timber, firewood, and constantly cleared our farmlands, engaged in indiscriminate burning and cutting,” Atumoce says.

But by this time, farmers in Garu and Tempane already knew that their crops like maize, millet, groundnuts, onions and watermelon would not grow without the use of chemical fertilisers, Atumoce explains.

“For the past 20 years, our parcels of land have not been fertile because one cannot plant without applying fertiliser. There was a long spell of drought; I observed that because the rainy season was delayed and the period of rain has now shortened. It decreased our crop yield and left us poor,” Atumoce says.

Asher Nkegbe, the United Nation Convention to Combating Desertification and Drought focal person for Ghana, explains to IPS that Ghana has adopted Land Degradation Neutrality (LDN) and set nationally determined contributions (NDCs). NDCs are commitments by government to tackle climate change by 2030. As part of Ghana’s NDCs, the country has committed to reforesting 20,000ha of degraded lands each year.

This includes identifying highly-degraded areas, establishing a baseline and increasing the vegetation cover. The Garu and Tempani districts are considered LDN key areas.

Ghana’s natural resources are disappearing at an alarming rate. More than 50 percent of the original forest area has been converted to agricultural land by slash and burn clearing practices. Wildlife populations are in serious decline, with many species facing extinction, according to a World Bank report.

The Garu and Tempane districts were the second and third areas in which the project was implemented, run in conjunction with the ministry of food and agriculture, the Ghana National Fire Service and other government agencies. From 2009 to 2012 the pilot was conducted in Talensi, Nabdam District, which is also here in Upper East Region.

The projects have been handed over to the communities and another one is now being introduced in Bawku East District, also in Upper East Region. 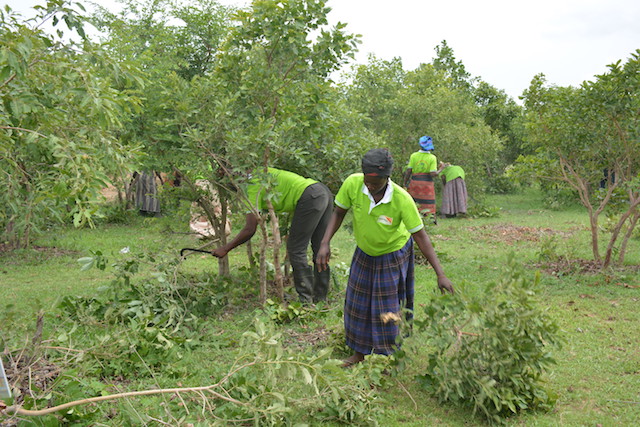 The restoration in Garu and Tempane began using simple principles. This community of mostly farmers selected a degraded area and were asked to not destroy the shrubs there but to protect and allow them to grow.

They were also taught by the ministry of food and agriculture how to periodically prune away weak stems, allowing the shoots to grow into full sized trees rapidly. They were also advised to allow animals to graze on the vegetation so that their droppings could become a source for manure.

“The critical science behind regeneration and improved soil nutrient are that the leaves of the shrubs or vegetation drops and decay. The decayed leaves constitute carbon in the soil and that promotes plant growth,” says Fiati.

So far, 23 communities in Garu and Tempane have adopted the approach, and 460 people were trained by the ministry of food and agriculture. Volunteers were also trained in fire fighting techniques by the Ghana Fire Service. Community volunteer brigades were then formed, and these play an active role in quashing bushfires threatening the land.

New bylaws to regulate the harvesting of surplus wood, grasses, and other resources were also passed and enforced to prevent the indiscriminate felling of trees.

The Garu, Tempane and Talensi districts are estimated to now have over 868,580 trees, with an average density of about 4,343 trees per hectare, compared to a baseline of around 10 trees per hectare.

“We gave the farmers animals to keep as a source of an alternative livelihood so that farmers do not go back to the charcoal burning,” Maxwell Amedi, Food Security and Resilient Technical officer of WVI Ghana tells IPS.

A significant number of people, including mothers and their children, now remain in the area thanks to this alternative source of livelihood.

Amedi notes that forests are essential to realising the world’s shared vision for its people, and the planet. Forests, he says, are central to future prosperity as well as the stability of the global climate.

Talaata Aburgi, 60, from Susudi community in the Garu and Tempane districts, tells IPS that neem trees have always been used here to cure ailments including diabetes, skin ulcers, birth controls, malaria fever and stomach ache. She is glad that these trees are now repopulating the area.

In addition, red and yellow berries and other indigenous fruit have started growing again. Birds, butterflies and wild animals, like monkeys and rabbits, have reappeared. As IPS travelled through the region and visited Aburgi’s farm, we saw a significant number of farmers adopting FMNR.

The FMNR project, Fiati says, is an excellent method of correcting the problem of reduced rainfall by bringing the production cycle in sync with nature.

“With lessons learned and the results observed with regeneration initiatives, there is hope. We are scaling it up and have even expanded it to include traditional healers and have set up 14 herbaria. It may not be 100 percent but for sure there are positive signs. More support is needed,” Nkegbe says.

“But for this initiative, our younger and future generation may have never known the beauty and importance of such indigenous trees as they [would have] all been destroyed,” Aburgi says.