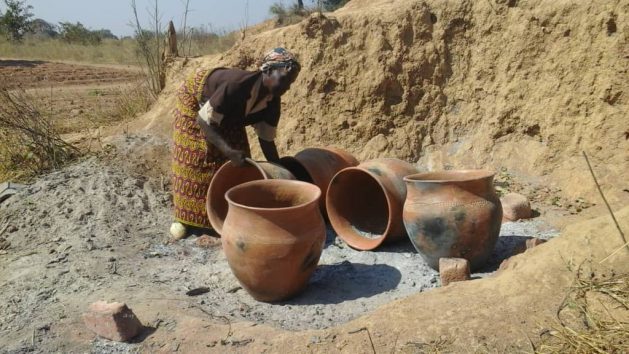 Fainess Muzyamba of Pemba district, Zambia, ending up ditching her traditional maize crop for sweet potatoes in the last farming season. It proved a successful strategy for her. She is pictured here with the clay flower pots that she also makes and sells at Zambia’s tourist capital, Livingstone, for additional income. Courtesy: Friday Phiri

PEMBA, Zambia, Aug 30 2018 (IPS) - Just having better information about when and for how long it will rain is proving the difference between success and failure among smallholder farmers in southern Zambia. Empowered with timely information about the weather ahead of the 2017/18 farming season, 56-year-old Fainess Muzyamba of Pemba district ditched her traditional maize crop for sweet potatoes.

“Through the monthly weather briefings that we get, I decided to plant sweet potatoes instead of maize,” Muzyamba told IPS.

The monthly weather bulletin that Muzyamba is referring to is part of an integrated package of interventions under the Rural Resilience Initiative by the World Food Programme (WFP).

“This service has been very helpful,” said Muzyamba. “Through this information and technical advice from extension officers, I was able to project that seasonal rainfall would be problematic, and decided to plant sweet potatoes—these don’t need a lot of water to do well.”

And the decision paid off.

At the current market price, Muzyamba would earn 2,800 Zambian kwacha (USD280) for the maize and an additional 1,200 Zambian kwacha (USD120) from her crop of sugar beans, which she has recently diversified into for its income and nutrition value. She added, however, “20 bags of maize is for food consumption” for her 11-member family. And it is guaranteed to last until the next harvest.

In Zambia, 73 percent of farmers or 1.5 million of the country’s 16 million people are smallholders, cultivating less than two hectares of land. Erratic rainfall is an additional burden to challenges such as fragile soils and poor access to agricultural inputs, markets and improved agricultural practices.

They often do not have access to basic risk management strategies and when climate shocks hit, their wellbeing in the short term is compromised. In the long term, these shocks have enduring consequences, including poverty, malnutrition and low life expectancy.

“The issue of erratic patterns of the weather and how we have seen this evolving, is a concern and a larger problem affecting smallholder farmers not only in Zambia but the entire southern African region,” noted Lola Castro, WFP regional director for southern Africa, during her visit to Zambia in March.

She told IPS: “It is for this reason that we think the Rural Resilience Initiative we are implementing with partners needs to be scaled up to empower smallholders to create resilience and adaptation to climate change impacts by discouraging mono-cropping of maize and promoting diversification.”

Farmers take and then share readings from the gauges with the meteorological office, field project and government extension officers, and fellow farmers for planning purposes.

In their farmers’ clubs, lead and follower farmers gather to discuss parameters such as the right soil moisture content for planting. By comparing their own locally-obtained information and the broad-based national and regional weather forecast, they are able to make projections of what to expect, thereby helping them to plan what and when to plant.

A success in a season of disaster

When she compares the average yields of other farmers in the area, Muzyamba believes her story is a remarkable turnaround in a season that has largely been a disaster for the majority of smallholders due to poor rainfall.

“Paying for my children’s school fees will not be a problem this year. I was particularly worried [about having the fees for my] oldest son who is in grade twelve,” she said. She added that the situation would now be manageable as she is also involved in a savings scheme with the farmers’ club. She uses the proceeds of her savings to transport clay flower pots to Zambia’s tourist capital, Livingstone, where they are sold.

“I think what we have learnt so far, is that the only way to address some of these issues is through an integrated approach—ensuring that activities are mainstreamed into national programmes to avoid confusion, and in future even when we leave as partners, these programmes continue to be implemented by relevant government departments,” Zambia WFP country director, Jennifer Bitonde, told IPS.

The initiative, which started in 2014, has been expanded to the Monze, Gwembe, Namwala and Mazabuka districts, reaching a total of 18,157 farmers.

By the year 2050, global population is expected to rise from the current seven billion to about nine billion, requiring a dramatic increase in agricultural production. According to the Food and Agricultural Organisation of the United Nations (FAO),  as populations grow and diets change the world must produce 49 percent more food by 2050 than it did in 2012.

FAO believes that hunger, poverty and climate change can be tackled together by recognising the links between rural poverty, sustainable agriculture and strategies that boost resource use efficiency, conserve and restore biodiversity and natural resources, and combat the impacts of climate change.

At a global level, one important step taken to actualise this strategy was the adoption of the Koronivia Work Programme on Agriculture by the U.N. Framework Convention on Climate Change (UNFCCC) at the 2017 Conference of Parties—the highest decision-making body on climate change and development.

This was after several years of discussing agriculture as a secondary subject at the UNFCCC negotiating table. But the decision to adopt it as a work programme, provides hope for farmers and processors in developing economies as meaningful action to adverse effects of climate change on agriculture will be taken.

“From our perspective as Zambia, our interest is in line with the expectations of the African group which is seeking to protect our smallholders, who are the majority producers, from the negative impacts of climate change through tried and friendly technologies,” Morton Mwanza, Zambia’s ministry of agriculture focal point person on climate smart agriculture, told IPS.

Meanwhile, George Wamukoya, one of Africa’s well-known experts on climate change and agriculture, believes innovative technology adoption is the next big step forward for African agriculture to be transformed.

“I think it is a positive step because it has brought the issues of implementation and science together, and this is what we have been fighting for. We need investment in agriculture, to try and get science to inform whatever we are doing in agriculture, and to help cushion our farmers’ challenges,” Wamukoya told IPS.

However, civil society groups are cautious of some approaches. Mithika Mwenda of the Pan African Climate Justice Alliance argued for a human rights approach.

Mwenda told IPS that agriculture is no longer just an issue of science but also a human rights issue, adding that industrialised agriculture was not the right remedy to smallholder farmers’ climate challenges.

“Our interest is to promote resilience to agriculture, the context in Africa is how to support that smallholder farmer, that pastoralist whose cows are dying due to drought every time, so it’s important that we look at it from this context and not theories of industrialisation,” explained Mwenda.