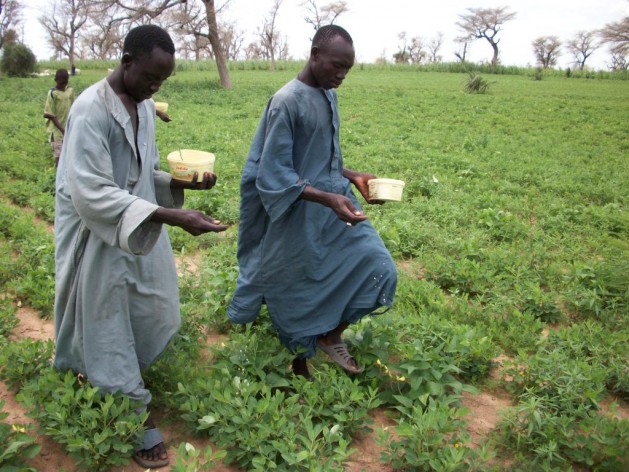 Application of Aflasafe in groundnut field. Photo courtesy of Aflasafe.com

ABUJA, Dec 27 2016 (IPS) - As food contaminants, aflatoxins are amongst the deadliest. Between 2004 and 2007, contaminated maize killed nearly 200 people in Kenya, left hundreds hospitalised and rendered millions of bags of maize unfit for consumption.

On average, 25 to 60 percent of maize – a staple in many African countries – has high levels of aflatoxins in Nigeria, warns the International Institute of Tropical Agriculture (IITA). And with that comes the risk of liver cancer, suppressed immune system, stunted growth in children, and death.

In the first year of the aflasafe trial, farmers recorded 13 percent average sales price over market rate, which is a 210 percent return on investment.

But despite such toxic potency, aflatoxins are hardly popular. Now, a made-in-Africa biocontrol product, Aflasafe, is taking on the poison, and is offering hope to millions across the continent who rely on vulnerable crops like maize.

“Aflatoxins are some of the most carcinogenic substances. But for four years that we have worked with farmers, we have seen great results in the use of aflasafe,” said Adebowale Akande, an aflasafe project lead at IITA, the institute that developed the product.

A four-year trial of aflasafe in Nigeria has yielded an impressive 80 to 90 percent reduction of aflatoxins, Akande said. “You will agree with me that four years is enough to know whether something is working or not,” he said.

Aflatoxin contamination is a global problem. But while developed countries regularly screen crops and destroy food supplies that test over regulatory limits, lax control and low awareness in developing countries mean billions of people face the risk of being exposed to the toxin daily.

The U.S-based Centre for Disease Control estimates that 4.5 billion people in developing countries may be chronically exposed to aflatoxins through their diet.

The toxins contaminate African dietary staples such as maize, groundnuts, rice either in the soil or during storage.

Countries in latitudes between 40 degrees north and 40 degrees south—which includes all of Africa—are susceptible to this contamination, the Partnership for Aflatoxin Control in Africa, PACA, an African Union body, said.

“The direct economic impact of aflatoxin contamination in crops results mainly from a reduction in marketable volume, loss in value in the national markets, inadmissibility or rejection of products by the international market, and losses incurred from livestock disease, consequential morbidity and mortality,” said PACA in a 2015 paper. 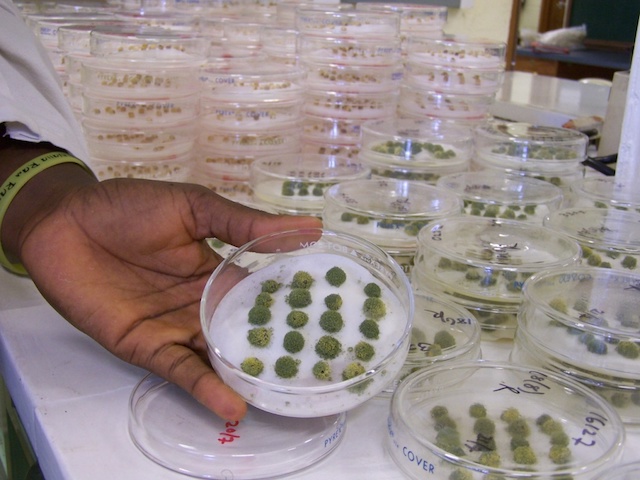 Developed over a decade by IITA, U.S. Department of Agriculture-Agricultural Research Service, University of Bonn and University of Ibadan, aflasafe is applied by hand on soil two to three weeks prior to crop flowering. It works only for maize and groundnuts for now, amid ongoing researches for other crops.

Within two to three days of application, the anti-toxigenic strain of the fungus builds up rapidly on the crop, colonizes it and stops the toxic strain from developing. With that, over 90 percent of aflatoxins can be eliminated.

Despite such promise, there are challenges. Low awareness of the dangers of aflatoxins means low demand for aflatoxin-free maize. Also, poor regulation has limited investments in the control of aflatoxin.

The IITA set up the “pull mechanism” to ultimately expand the use of aflasafe by providing economic and technical incentives to smallholder farmers, who work in groups through intermediaries called implementers. It features per-unit payments based on the number of kilograms of maize treated with aflasafe.

Premium payments equal to 18.75 dollars are paid for every metric ton of high-aflasafe maize delivered to designated collection points. This corresponds to a premium rate of 5 percent to 13 percent depending on the current price of maize.

Abubakar Yambab, 43, is one of such farmers. At Abaji, a suburb of Abuja where he lives, Mr. Yambab grows maize on a 1⅟2 hectare of land. He told IPS he first used aflasafe in 2015, and his yields have since improved in quantity and quality.

“Using aflasafe has a multiplier effect,” he said. “It removes the coloured particles (aflatoxin) we used to notice in the harvested maize and I don’t think I can grow maize now without aflasafe.”

Yambab said he receives subsidized fertilizers, farming equipment, tractors and chemicals from IITA, and has relied on his farm proceeds to feed his six children and two wives, in addition to recently completing a block home.

Receiving premium payment on aflatoxin-reduced maize makes business sense for the farmers despite investment in the aflasafe technology.

Nigeria was chosen as pilot location for aflasafe as it is the leading producer and consumer of maize in sub-Saharan Africa and up to 60 percent of its maize may be affected. The country is for now the only developing country in which aflasafe is ready for use by farmers.

But similar work is going to Senegal and Kenya. A manufacturing plant capable of producing 5 tons of aflasafe per hour is operational at IITA headquarters in Nigeria, Ibadan. Another is under construction in Kenya and a third is underway in Senegal.

The institute is also working on transferring the technology to allow companies produce and distribute aflasafe to millions of farmers throughout sub-Saharan Africa.

“It is slated to cover 500,000 hectares in 11 countries where aflasafe will soon be registered,” Matieyedou Konlambigue, who leads IITA’s Aflasafe Technology Transfer Commercialization Project, said at the launching of the project on Dec. 1 at Ibadan, Nigeria.

The targeted countries are Burkina Faso, Ghana, Kenya, Malawi, Mozambique, Nigeria, Senegal, Tanzania, Gambia, Uganda and Zambia, Konlambigue was quoted by the News Agency of Nigeria as saying. The project is to last from 2016 to 2020.

Yamdab said he would advise other farmers to use aflasafe for their crops. “If all farmers in the FCT (Federal Capital Territory) use aflasafe, it will really improve the quality of food products here,” he said.