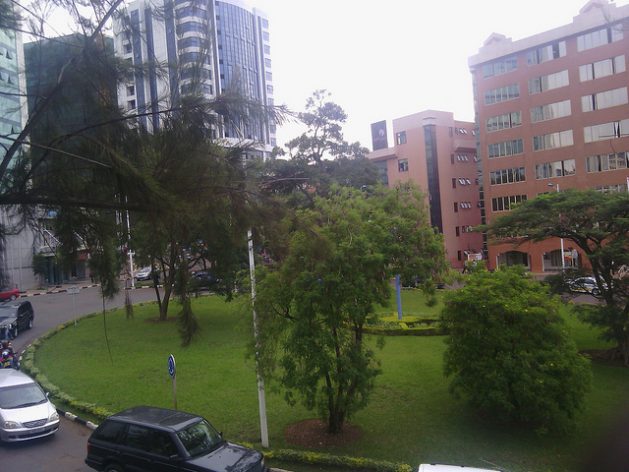 Kigali, Rwanda’s capital, is described as one of the safest and cleanest cities in Africa. The country is now implementing its national development plan to create green secondary cities. Credit: Aimable Twahirwa/IPS

At a time when natural resource efficiency is described as key for  secondary cities in Rwanda to move towards a green economy, the Global Green Growth Institute (GGGI) is supporting the government of Rwanda in implementing its National Development Plan by creating a National Roadmap for Developing Green Secondary Cities.

The national roadmap serves as an implementation tool for the Economic Development and Poverty Reduction Strategy 2 (EDPRS2) and the Green Growth and Climate Resilience Strategy (GGCRS), and provides key actions and practical planning guidance to policymakers in order to strengthen economic growth, enhance the quality of health and basic services, and to address vulnerability in Rwanda’s Urbanisation process.

As part of implementing the pillars of urbanisation as recommended in the roadmap, GGGI also provided support to draft the Rwanda Green Building Minimum Compliance and Standards that will strengthen  the current building codes to  accelerate green growth and low-carbon development in Rwanda’s urban areas.

With the urban population growing at 4.5 percent a year, more than double the global average, Rwandan officials are now emphasising the need to develop secondary cities as poles of growth as the country has set a target to achieve a 35 percent urban population by 2034.

In 2016 and 2017, GGGI in collaboration with the relevant government agencies developed a Green City Pilot visioning, parameters and concepts that will enable a demonstration effect on how green urbanisation could be showcased in a flagship project.

“The government initiative has so far helped to draw interested partners into providing technical and investment support to development of  these six secondary cities, and a number of project concepts have also been developed  into  green finance project to attract more investments into the cities,”” Daniel Okechukwu Ogbonnaya, the Acting Country Representative and Lead Rwanda Programme Coordination of the GGGI in Kigali, tells IPS.

Among some quick win projects that were identified during the development of the National Roadmap,  includes for example the Rubavu Eco-Tourism park in northwestern Rwanda, which aims to conserve the environment while improving the welfare of local people through job creation in the tourism and travel industry.

In Rwanda, some key interventions by GGGI to support a ‘green economy’ approach to economic transformation were to move from ideas into project concepts that could be used to access investment opportunities with potential job creation opportunities when implemented.

“But the capacity to understand the paradigm shift at local level is evolving and do take time because  the subject area of green growth is still new,” Ogbonnaya says.

While the initiative appears to be a strategic tool for the National Strategy for Climate Change and Low Carbon Development that was adopted by Rwanda in 2011, experts suggest that it is also important for local administrative entities to understand the mechanisms of green urbanisation and secondary city development.

Some experts in urban planning believe that with the mindset for Rwanda’s green secondary cities development are changing from “quantity” to “quality,” top priority should be given to marrying individual and community interests in these remote urban settings.

A key focus of these government interventions is the provision of affordable housing with adequate water and sanitation facilities for secondary cities dwellers, promoting grouped settlements locally known as ‘Imidugudu’.

With the weak residential infrastructure in secondary cities  in Rwanda, Karekezi stresses that current efforts supported by GGGI are helping local authorities to adopt a set of housing standards with appropriate design for some parts such as windows to provide energy savings in electric lighting.

“Absolutely, Rwanda has a long way to go, there are  efforts to raise awareness on energy efficiency and other issues, such as urging people in these listed areas not to build housing that does not meet the required standards,” Karekezi tells IPS in an exclusive interview.

Within these efforts supported by GGGI, both climate change experts and Rwandan officials believe that the ability of secondary cities to create job opportunities would help draw people from rural areas as well as reduce the influx of people to Kigali.

Both Karekezi and Ogbonnaya are convinced that capacitating local actors and the private sector to understand how projects and concepts are designed represents a shift in how the implementation of green urbanisation will be managed.

Despite some successful projects including the ecotourism park initiative which needs a scale up investment to  to improve the welfare of local residents in Rubavu, a lakeside city in northwestern Rwanda where local residents and  experts believe that the focus should be more on private investments than on direct government aid.

In 2018, GGGI received approval to be the delivery partner on a 600,000 dollar Readiness Support project fund from the Green Climate Fund (GCF), which aims to ensure that the Government of Rwanda has improved capacity to develop and deliver green city development concepts, identify investment priorities. GGGI also supported the Rwanda GCF Direct Access Entity to access in 2018 the sum of 32.8 million dollars for “Strengthening Climate Resilience of Rural Communities in Northern Rwanda.”

But still, locally-based organisations and administrative authorities with private companies need to be the main actors for the successful implementations of the green cities initiative.

Currently GGGI is capacitating the local administrative entities in the listed secondary cities to develop their own District Development Strategies (DDS)  for six secondary cities as reference tools for the better implementation of green initiatives at local level.

Thanks to these interventions, some local actors are being empowered to implement projects such as garden cities, which have been described as another opportunity to attract investment and create employment as well.

“But to really grow, these green city projects needs to bring in financing and to get this happening, we need to have interesting projects and interesting businesses such as clean energies in which private companies can invest,” Karekezi tells IPS.